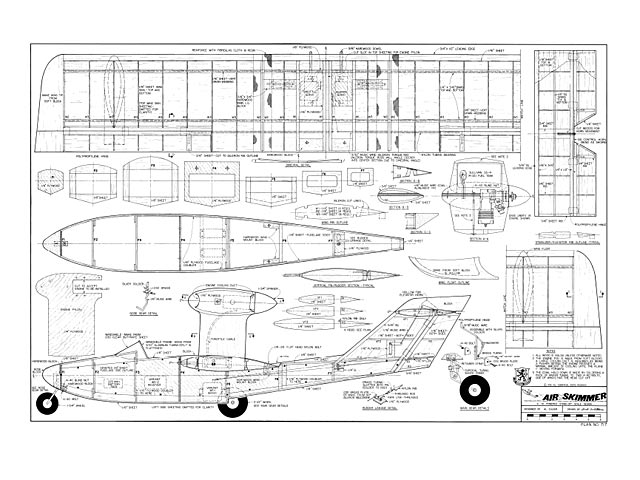 Quote: "A .19 sized stand-off scale amphibian, designed for four-channel operation. If you're looking for a combination land and sea sportsplane, the Air Skimmer is for you. Air Skimmer by Al Culver.

When I decided to expand my modeling into radio controlled model airplanes, I went into it operating on the premise that not all air-planes capable of being flown by a novice had to be ugly and non-scale. My choice was a home-built seaplane known as the Osprey. The Osprey has undergone a name change and design change to make it amphibious. I offer it to you in this configuration.

I chose a Super Tigre .19 for power and a Blue Max radio for control. Being rather traditional, I chose balsa as the medium in which to work. The design is a natural for foam application, but wood provides the lightweight, strong construction I desired. The airplane builds fast and easily so the wood isn't a detriment.

Flying brought some moments of glee to the family and the local club because the Air Skimmer didn't fly. I had, in spite of careful thought about high thrust lines. built the neatest winged car in captivity! I did get lots of taxi time, though. A high thrust line has a tendency to tuck the nose at power increases and pitch it up at power decreases. To compensate, I built a negatively lifting horizontal tailplane and, following the taxi tests, a slight thrust modification cured the 'kiwi complex'. The controls are very sensitive and small amounts of movement go a long way in the air.

The only deviation from common building practices might be the landing gear that is silver soldered. Silver soldering isn't difficult and construction might well begin with the metal work. For those who haven't used silver solder, a few words of introduction. A Benzomatic torch will do a good job. Your local welding supply can furnish you with flux and silver solder. It is expensive, but a little goes a long way.

Cleanliness is the real secret to success. Sand and file all joints until they are clean and the flux will keep them clean. I use lots of flux to keep the area around the joint clear of oxidation and discoloration. The flux, which is either a paste or a liquid, will, when heated, dry out and then liquify again. When it is liquid, the temperature is getting nearly right and the silver solder should be put to the joint. 1100° silver solder is probably the best suited for model work. When it melts, if the metal isn't hot enough, a little ball will form. As soon as the temperature is right, it flows. Silver solder moves easily to the heat so. by moving the torch flame along the joint, the silver solder just follows it. One caution - silver solder does not fill large holes so make your joints close fitting.

The landing gear is semi-scale and fully shock absorbing. It can be removed and filler bolted in place of the nose gear for operation off water. The main wire
components are simple to bend from 1/8 music wire. The shock cord mount is 3/32 music wire with washers soldered on and then filed down as retainers of the shock cord. The pivot point is .032 brass side plate and 5/32 brass tubing. The throttle cable (nylon housing with brass cable) can be secured to the pylon with a small nylon landing gear clip with one end cut off. Be sure that the cable works smooth and free.

The elevator horn is a standard Sig control horn with a nylon link for control hookup. The only other metal I used is aluminum templates of the wing and horizontal ribs. With sandpaper glued to one side, you can cut ribs with hardly any need of sanding.

The wing is built in three sections and is super simple and strong. I found that building the basic wing first and then the ailerons was the easiest way to get a nice, straight wing. The tabs on the ribs provide a straight, steady working situa-tion while you install spars and spar webs. When you have the 1/16 leading edge cap. the four spars, all the webbing and the ribs assembled, glue a piece of 1/8 balsa to the vertical side of the trailing edge tabs. This will hold the aileron ribs as a single piece when you cut them free from the rest of the wing. Glue the aileron leading edge and sand to shape on the top..."

Article pages, text and pics, thanks to JJ. 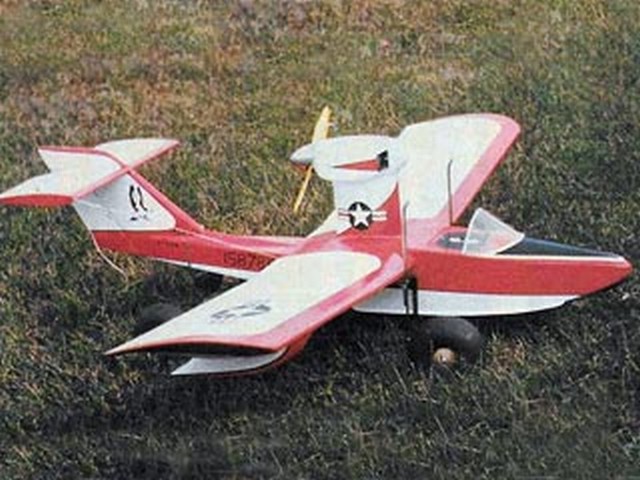