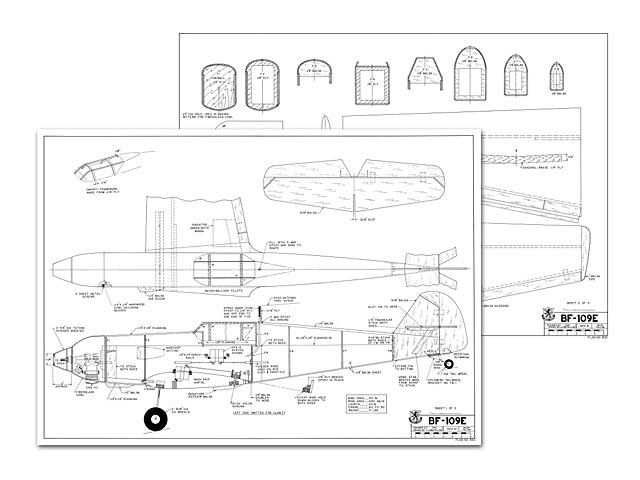 Have you ever been so moved by something that it gives you goose bumps? Like the lines of an outstanding classic car or a good piece of music? Well, the looks of WW II German Fighter planes do that to me. They all just seem to have the lines that I like. For this reason I have been thinking about RC'ing the ones I like best. And. what else do you start with but the BF-109E? There is one big problem that keeps giving me trouble: I'm not a good enough flier for true scale, but I am far enough along to be tired of trainer types, which I don't think look like airplanes. I keep asking myself: Why can't I come up with a design that looks real, but is still relatively gentle to fly"?

I know it's been tried many times before, but I just had to give it a try. It seems that I debated with myself for months about going ahead with the project. During this time I even looked for a kit, but of course, there isn't much available in Stand-Off Scale for a .40 to .45 engine.

At about this point in time I picked up the current R/C Modeler; low and behold two stand-offs; a 109E and a Tony, both on the same Sunday Fighters (oz9348) plan by Danny Reiss. This gave me the boost I needed. Although Mr. Reiss' plans were close, they were not just what I wanted. I broke out the drafting table and went to work on some plans of my own. Using the old rules of thumb: length 75% of span; nose moment 20% of length; and tail moment 40% of length. I kept juggling these figures until I got the look I was after. A reasonable facsimile of the real thing.

Before I go any farther. I think I should explain something I'm sure you're thinking by now: What's with this guy, first he says he's not a good flier, now he's designing a scale model! What goes? Well, I have been designing' building and flying models off and on for over thirty years, but I just never got around to R/C until about three years ago. Now I've really got the bug! Okay, back to the 109.

After arriving at the moments I wanted, the rest was easy. Since I hate to build wings. I decided on a foam core. I did stick with the old standard balsa and rags (silk) for the rest of the construction. Since I scratch build most all of my models. I have developed a routine. It starts by transferring all the piece pans to the balsa sheets, and cutting them all out. If you make all the pieces you're going to need for the complete model right away you'll find the rest of the construction goes along just like a kit.

Construction. Starting with the fuselage. Install the doublers as shown. Making sure both sides are lined up, clamp the aft ends together, but do not glue. Install the firewall F- I and bulkhead F-4. I use 5 minute epoxy here. After these are set, install all bulkheads except F-8. Making sure they are centered, add the fin alignment blocks to the aft side of F-8. Now, position on the front of the fin and install both in the fuselage. As you will notice, this is a self aligning assembly, so a little care at this point will save lots of headaches later. The planking on the bottom front should be done first..." 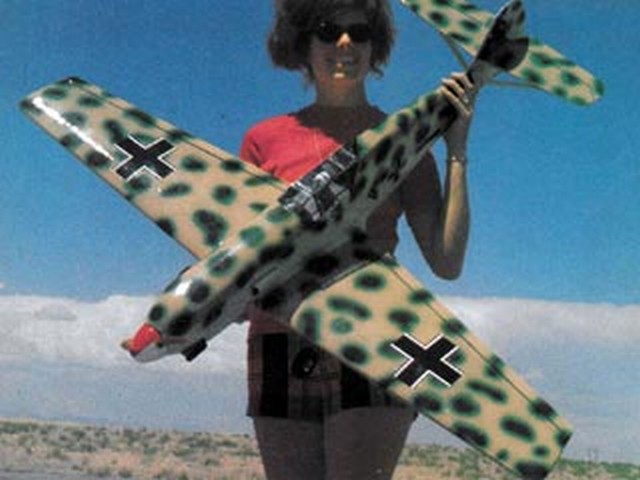