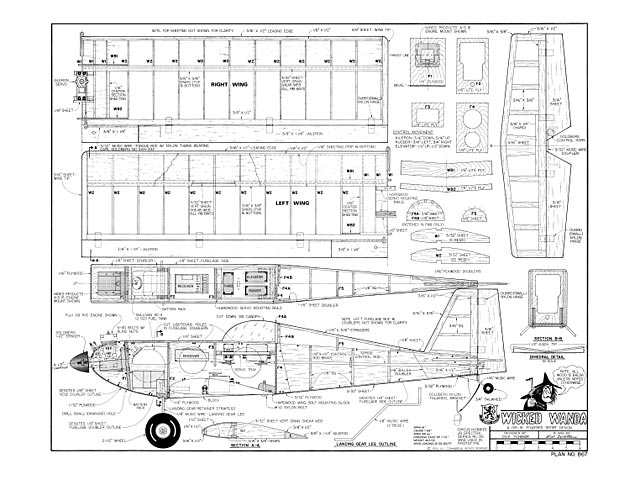 Quote: "A .10 - .15 sport plane with aerobatic capabilities. Or, how we made a lady out of Wicked Wanda. By Dick Tichenor

We wanted a small aerobatic airplane that would also be gentle and easy to fly. It must also be strong, quick and easy to build, and have a fair degree of eye appeal. It would be powered with a .10 size engine and use a standard size 4 channel radio.

The above criteria seemed reasonable and should fill our desires for a small machine to make believe that we are a Don Lowe, or a Dave Brown, or a Tony Bonetti, on an economical scale. Well, it was no big thing to draw lines on paper, nor was it much of a project to build this number. Then came time to fly - wow! It was aerobatic, oh boy, was it aerobatic! Gentle and easy to fly, no way, it was fast, sudden, even vicious.

After a few flights by several talented fliers who had their hands full, this little bird was christened Wicked Wanda. It didn't take too much smarts to figure out what was happening, the wing was the culprit. The quick build approach had prompted a symmetrical airfoil, no leading edge sheeting, and a small radius leading edge. Back to the drawing board!

This time we did it correctly. A Clark Y type airfoil, a bit fat, with sheeted leading edges and a more reasonable LE radius. With a re-shaped wing saddle in the fuselage, we were ready to have another go at it. This time it performed the way we wanted it to in the first place. So we have to feed in a bit of down elevator for inverted flight, big deal, now it's gentle and predictable.

After passing Wicked Wanda around to several friends, we couldn't resist the urge to replace the Hobby Shack Fuji .099 engine with a Fox Schnuerle .15 BB. The engine change made the take-off and climb a bit quicker and made it pull through maneuvers faster while retaining its low speed characteristics. Some of the guys preferred the .15 and some of us were happy with the .10, it is sort of a personal taste thing as it flies beautifully with either size engine. Then there was the time that Randy called and asked if he could put his engine in WW. He installed his Cox .15 Conquest and the results weren't exactly what we had in mind for WW.

For those who aren't familiar with the Conquest, it is a high performance engine developed by Cox a couple of years ago with Quarter Midget racing in mind. Now WW had a sky rocket climb and streaked around like greased lightening. Forget it, that isn't what we wanted but it did prove that WW would hold together under all the G's imposed upon her with that hot engine.

A Circus Hobbies JR Spectra Series 4 channel radio was used in this project. This was the lowest priced radio system in the Circus Hobbies line (when we started the project) with their standard size servos, receiver, and battery pack. We selected this radio to make sure that WW would perform properly with a sport model radio most often flown in larger aircraft. The radio has rendered excellent service over the months of use in WW and everyone involved in this project has been happy with the smooth gimbals and nice handling balance of the transmitter.

So much for the taming of the shrew, let's build one.

General: We suggest that a complete set of parts be cut out for each major component before starting assembly as this makes the project go together much faster..." 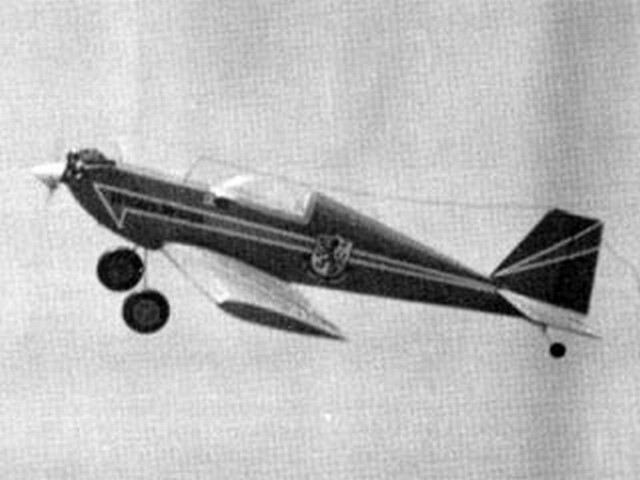