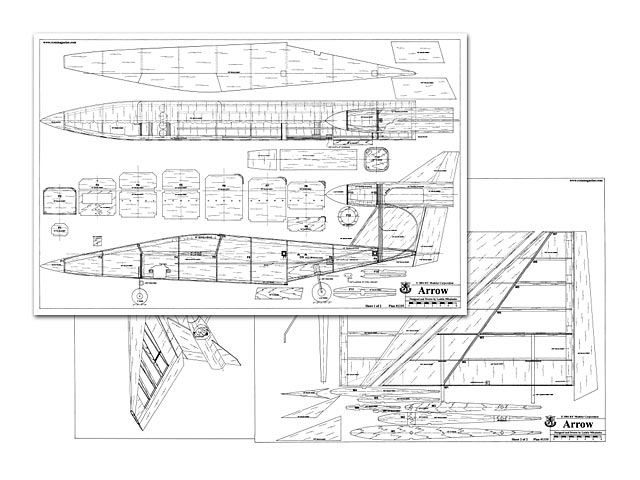 In 1986, the plans for an amphibian model that I designed called the North Star (oz10325) were published in the pages of this magazine. To my amazement, after nearly two decades have passed, this model is still being constructed in many parts of the world and Balsa USA continues to produce kits for the North Star to this day. Since the inception of this model, various delta wing model designs seem to dance around in my head. The Arrow presented here is a simplified version of the North Star. This model is amphibious as was the North Star.

Characteristic of deltas with a light wing loading is that it has a great speed range. The Arrow can burn up the sky while performing high speed passes, but it can also be slowed to almost a crawl during landing. Any glow engine from .35 to .60 cu in can be used to power this model. Alternatively, electric power enthusiasts can achieve good performance by using the appropriate brushless motor.

The wing halves plug into the fuselage, which makes transportation of the model a simple task even in the smallest of 'aircraft carriers.' No fiberglass was used in the construction of the Arrow. If you decide to build this model, and are seeking solid performance, then build it as shown on the plans. I am aware from past experience, that some of you will modify the design. In this case, be certain to keep the wing planform, CG, and location of the engine elements consistent with those indicated on the plans.

The prototype was constructed by using instant glues exclusively, following the building sequence described below

Construction. The wing is built first. As mentioned earlier, the wing halves plug into the fuselage. Two 3/8 in OD carbon fiber tubes with 1/16 wall thickness protrude from each wing half. These tubes plug into square plywood box receptacles inside the fuselage. Construct these tube boxes from 1/8 birch plywood. Cut out strips for the box sides as shown on the plan. Wrap the carbon fiber tubes using one layer of clear (food wrap) plastic. Glue the plywood strips around the carbon tubes to create a square box. Once the glue has cured, pull the tubes out and set them aside.

Cut out all of the ribs. Ribs W1 and W3 are cut from lite ply while all other ribs are cut from balsa sheet. Be certain to mark the loca-tion of holes for the carbon fiber tubes very accurately since this is critical to alignment. Cover the plan with clear plastic. Directly over the plan, pin the leading and trailing edge sheeting to the building board..." 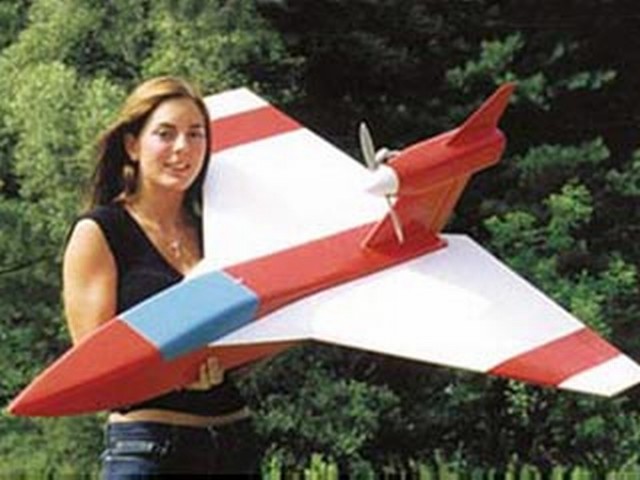