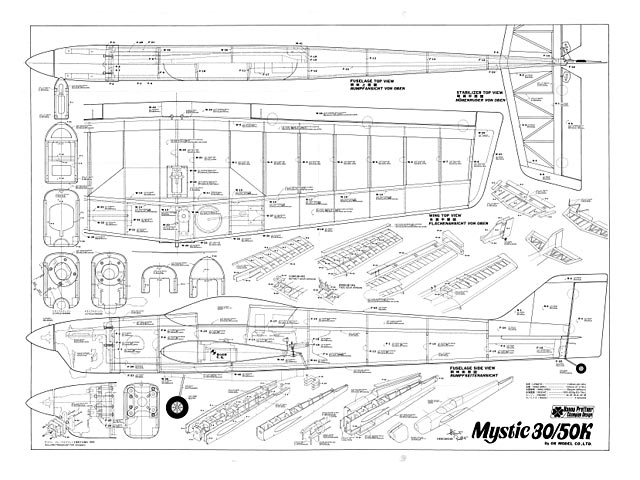 Quote: "Hi Steve, I bought all of these kits over the past year specifically to share with others. I am sure the plans will be appreciated. I know there are a number of people who are big fans of the Pilot kits and then there are the F3A / Classic Pattern guys who should get a kick out of the Mystic 30... Kind regards,"

Quote: "MB Review: EZ Mystic 30. This month we will take a close look at the Mystic 30, one of the excellent EZ series of ARFs distributed by Global Hobby Distributors.

The Mystic is a small, attractive pattern-type taildragger designed by Hanno Prettner, six time World Champion and arguably the most skilled flier and designer in RC history. The ship spans just 52 inches and is designed for .25-.35 two-stroke or .40-.43 four-stroke engines. Like any full-size competition pattern model, it has a fully symmetrical airfoil and an especially long tail moment to smooth out the most intricate maneuvers.

As luck would have it, just about the time I acquired the Mystic 30 kit, a brand new I Magnum engine became available from Global Hobby Distributors: the Magnum PRO .36 SE, a state-of-the-art ABC two-stroke. I had heard that the engine was claimed to be exceptionally powerful, so I obtained one for the Mystic 30. As it turned out, I couldn't have made a better choice - but more about that later.

Assembly of the airplane went smoothly, with every part an excellent fit. The construction is typical of the EZ series models - a wood framework covered with laminated foam board, topped off with what I feel is the most attractive color scheme I've seen on any ARF. All of the finished surfaces are covered with a tough mylar coating and are completely fuelproof. The bottom of the wing and horizontal stab bear entirely different colors from the top, making it a snap to distinguish top from bottom in the air.

Following the usual techniques used with most EZ models, the wing halves are joined with epoxy and the tail feathers are epoxied to the fuselage. Plastic cover plates cover the center wing joints, and a nice plastic fairing goes over the tail surfaces. Thin CA was used for all plastic-to-plastic joints.

The Mystic 30 is thoughtfully designed to accommodate a piped engine, as there is a channel fora pipe designed into the belly of the fuselage. Additionally, a pipe holder and mounting hardware are included in the kit. I chose not to use a pipe, at least not at first, as I was more interested in seeing what the Magnum engine would do with its standard muffler.

Typical of EZ models, every necessary hardware item is supplied, with enough extra nylon horns, clevises, etc. to stock a spare parts bin. Complete mounting hardware for a retract gear setup is also included, but in the interest of simplicity and light weight I went with the standard fixed gear.

All hinge slots are factory machined and required some cleaning up before the control surfaces were attached using the brass hinges supplied in the kit. These were se-cured installed permanently with five-minute epoxy.

There isn't a lot of room to work with in the fuselage, so when it came time to install the radio I thought I might have to use a mini receiver and servos. Fortunately, my son is a real whiz at radio installations, and managed to squeeze in a standard Airtronics six-channel receiver along with a 500-mAH flat battery pack. But forget about foam packing - there just isn't room for it He used two mini servos for the elevator and rudder and a micro servo for the throttle, which he mounted in the fuel tank compartment. The wing easily accommodated a standard servo.

The only real difficulty I encountered was assembling the cowling. This comes in two pieces, which I joined together, then reinforced on the inside with a strip of glass cloth. However, the front face of the cowl ended up being badly tilted in relation to the spinner backplate. I corrected this by adding a 1/8-inch plywood plate to the face of the cowl and sanding it to a wedge shape.

The 24-page instruction book which guides the builder through the assembly of the Mystic 30 is clearly written in both English and Japanese and includes many black-and-white photographs. A number of critical points are not thoroughly explained or demonstrated in the photos, but then, we are not dealing with anything remotely resembling a trainer, and I would expect anyone tackling this project to be an experienced RC pilot who can read between the lines when the instructions are not totally explicit. However, when it comes to preparing the model for flight, the instructions are outstanding. Directions for CG location, control throw limits, engine thrust, and even balancing the wing are simply written and easy to understand.

The Mystic 30 is a truly beautiful airplane, with its long moments and graceful lines. The factory specs indicated a flying weight of 67 to 70 ounces, but I was pleased to find that mine came out at only 65 ounces, probably due to the use of the lightweight servos and going easy on the epoxy. With a wing area of 465 square inches, the wing loading calculated out at only 20 ounces per square foot - pretty much on the light side.

Test pilot for my Mystic 30 was Jerry Kitchin, a top-notch RC flier. As I intended to give the Magnum .36 an in-flight break-in, the needle was set toward the rich side. Even so, the lightweight model accelerated instantly and was off the ground in no time.

There's nothing Jerry can't do, given a capable airplane, and as he went into a full vertical climb, we knew this was far more than jUst a capable airplane! Attesting to the well-aligned construction, the only trim required was two clicks of right aileron and one click of up elevator. This done, Jerry commenced to put the ship through its paces while all of us, Jerry included, marveled at its aerobatic abilities.

Not a person given to overstatement or exaggeration, Jerry kept uttering words like 'awesome' and 'unbelievable.' On the next flight he put the airplane through his freestyle flight routine. He began the flight with a stunt he usually performs only with his own showplane, which is equipped with a YS 1.20 four-stroke. With an assistant holding the plane with the nose pointed straight up, Jerry applied full power and did a vertical takeoff right out of his helper's hands! During this flight I asked for a turn on the sticks and took over in mid-flight. The airplane makes even a so-so pilot like me look good with its smooth flying characteristics.

The Mystic 30 is more than just an airplane for the experienced flier. My feeling is that if you haven't flown a plane of this caliber, you have yet to know what real RC flight is like, and I can't think of anything else in its class that can do as good a job." 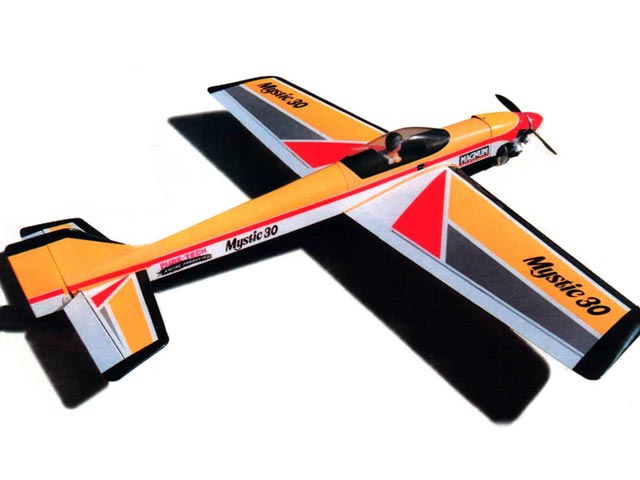