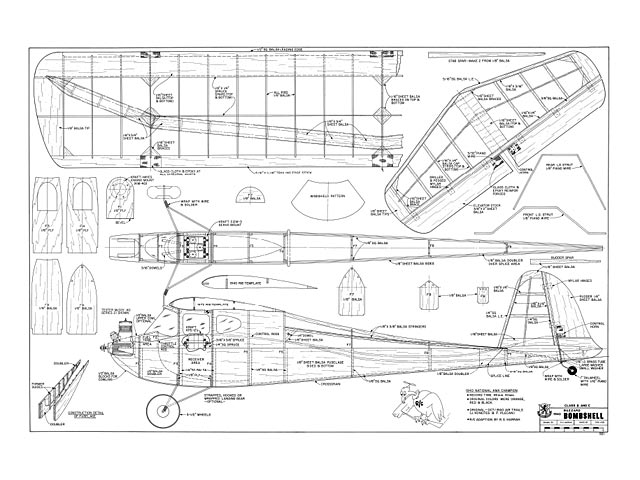 Buzzard Bombshell. Radio control sport model. The original Buzzard Bombshell (oz5360) was from the 40s, this here is a later kit plan, from the 70s. Updated RC version of the classic 1940 FF design, for .35 power and 3 channel radio.

Quote: "More and more old timers are starting to reappear in the magazines, in the field and on the contest level. The Buzzard Bombshell could be one of the reasons, since this model has records, history, and legend that fas-cinates the most avid aero modeler, and no matter how wild some seem, most are true. The circumstances that brought about the birth of the 'Buzzards' are as true today as they were then.

The 'Buzzards,' as a club, were born in the thirties. They were modelers much like most of us today, with a desire to build and Used adventure with the newest developments being applied to the old. This group was formed by strays or mavericks from other clubs and organizations with one single goal: Fly every Sunday, regardless of prevailing conditions. Legend says, they had their best flights in two feet of snow! This type of dedication gave them the experience necessary to produce the 1938 and 1940 Nationals winner. Maybe we should call them vultures, because of the way they picked apart their prey. This new found talent started them on a relentless attack on the contest trail and they did make many a score.

With this expertise, they combined their knowledge and built their Bombshell. This new design was to explode at every meet and blast all competi-tors, and that it did! It was like an 'A' Bomb during their first club outing at the Nationals in Chicago. Legend tells how the first plane of destiny was lost north of Madison, Wisconsin, after winning the Milwaukee State Contest. Then a few days later the sacred cow of modelers mooed at this strange creature in the tree and the lost Bombshell was spotted and returned to the Buzzards in time for the Nationals in Chicago.

Arriving at the Nationals en masse, (legend says they built them by the dozen), and taking a few trim flights, they started their first entry down the runway. This first flight stayed in the air for a new national record of over 49 minutes and landed within the bounds of the field. The next two flights were made with throttle down (to keep from loss) giving the Bomb-shell a total of over 58 minutes and first place. The other Bombshells came in third and fifth. This was only the beginning of a winning record that may not have ended even now, over thirty years later.

Today, I hear of many ten, fifteen, twenty and some thirty minute flights, but no 49 minute in-sight flights. Sure, we put on dethermalizers in the free flight world and we fly until the gas tank or batteries run out in the R/C circles, but I wonder how many can keep a free flight R/C up for 49 minutes? Sure, we can slope soar at Torrey Pines with sailplanes, but how about just air currents and thermals over flat land?

Since I am basically a sport flyer who enjoys all types of modeling, it is hard to say which is Number One in this big field. However, I can say: I think one of the most satisfying challenges I have had is to try and top the above with the aid of R/C so I do not lose my ship.

For the past few years I have flown two Carl Goldberg Clippers (oz7380), a Sal Taibi Brooklyn Dodger (oz1056), a Miss America (oz5645), and three Buzzard Bombshells (oz5360). I have used single channel, Galloping Ghost, three channel and four channel propor-tional. I have used both ignition type and glow type engines, all of which have had hundreds of flights except the newest Buzzard Bombshell. With each of these, many one and two minute motor runs were used to get the plane in the air high enough to try and catch a thermal and we how long they could be held in range or sight, then ,bring them back for another thermal, or land the plane at the flying site. The average flight would last for one thermal ride, six or seven minutes, and about every fourth or fifth flight would run twenty or twenty-five minutes. This requires very little wind and three to five thermal rides. Then, if I was in good air, and my batteries were up, about one out of twenty times I could achieve the forty to forty-five minute flight.

Now that you have been kind enough to read this far, you are probably trying to figure out what I am leading up to. It is simple; what about an old time fun fly like the Buzzards desired, but using the modern equipment of our time? After much thought and many hours of debate with fellow modelers, the following has been considered as a start:

Old timers models must be prior to January 1, 1942, with only deviations allowed for motor mounting, hardware, covering and necessary modifications for adaption to R/C. Many other rules, such as spot landings, duration records, ROG, etc., can still keep it in the sport fun-fly. No trophies, ribbons or prizes, perhaps a card showing time, place and score, but nothing more.

Many of you will question the possibility of this, and many will say it is too easy; I can only answer that this depends on your talent and if the plane will fly without the motor running. As some say, 'controlled free flight.'

The Buzzard Bombshell, like many others, makes it quite possible. For instance, the ignition system (engine, coil, condenser, timer, and batteries) had a total weight of about 530 grams. The Kraft system I used came out a little over 515 grams with a .29 McCoy Series 21. So, at least in the beginning design stage, all things appeared to be about equal. The old time Bombshells were considered good if they weighed 3 lb 8 oz or less. I was lucky and came out 3 lb 5 oz on the ignition free flight version, but my R/C version came out more than desired - 3 lb 14 oz. This can be attributed to the addition of the muffler (should be required in rules), control rods and parts, steerable tail wheel, hinges, spruce in the wing spars and sheet balsa control surfaces (a little extra dope, too). However, this additional 6 oz. over the original is still close enough to make it capable of having the same good flying thermal catching potential.

Any group, contest, club, spectator, or demonstration with this type of plane, will be more than satisfied with the majestic flights, the understandable rules, and the excitement of watching a plane fly. With the new frequencies now available, it makes it possible to have many ships in the air at the same time. Of course the old smoke screens, banner towing, parachute drops, etc can also help make for a real good, old-fashioned barn-storming type air show (this type of flying with short muffled motor runs just might be the answer to keeping close-in flying sights) and can be totally gratifying to all. It should be noted at this point, some of these old birds will do complete pattern flying and make excellent ROW (rise off water) planes..." 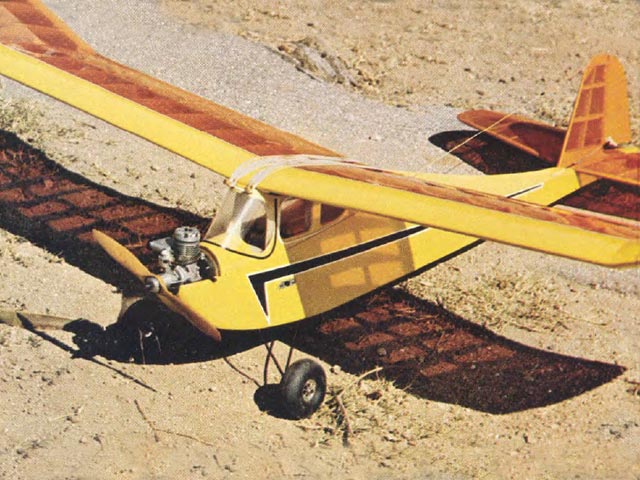