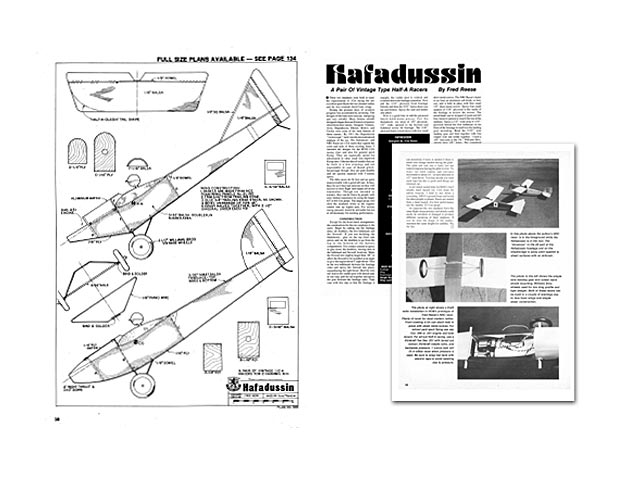 These two airplanes were built to meet the requirements of 1/2A racing but are excellent sport flyers for two channel radios and the Ace constant chord foam wings.

During the pioneer days of aviation progress was accelerated by air racing. The designs of the time were unusual, intriguing and very colorful. Many famous aircraft designers began then and formed companies which bore their names. Nieuport, Vickers, Avro, Deperdussin, Bleriot, Bristol, and Curtiss were some of the most famous of these names. By 1913 the Deperdussin 'monocoque' racer was the most advanced airplane of the era. The Hafadussin and NRC Racer are 1/2A racers that capture the color and style of those exciting times. I intended the designs for the RCM 1/2A racing class and also for general sport flying. They are especially suited for schoolyards or other small non-improved flying sites. I like the idea of models that can be built in a few evenings and are expendable in case of thumb glitch. Surprisingly though, they are quite durable and are quickly repaired with 5-minute epoxy.

The little racers do fly fast and are quite maneuverable with a good roll rate. In fact, they fly as if they had ailerons yet they will recover to level flight with hands off of the transmitter. Though not intended as trainers, they can be flown by people with only limited experience by using the larger 6/3 or 6/4 Cox props. The larger props will slow the airplanes down as the engines cannot turn up higher rpm. For serious racing pressure would be advisable but not at all necessary for exciting performance.

Construction. Except for the front hatch arrangement, the construction for the two airplanes is the same. Begin by cutting out the fuselage sides, all doublers, the two bulkheads and the firewall. If you are building the Hafadussin, glue on the top front side pieces and cut the doublers to go from the top to the bottom of the battery compartment. Use contact cement or epoxy to glue down the doublers, leaving slots at the bulkhead and firewall locations. Make the firewall slot slightly larger than 1/8 in to allow the firewall to be installed at an angle to give the engine about 2 degrees of right thrust. Glue in the two bulkheads between the fuselage sides and epoxy the firewall into place, remembering the right thrust.

Bind the wire tail skid to the rudder post with thread and, in one step, pull the tail together and epoxy the post between the fuselage sides. Take care with this step so that the fuselage is
straight, the rudder post is vertical and centered down the fuselage centerline. Now add the 1/16 plywood front fuselage bottom and then the 3/32 balsa sheet rear top and bottom. Epoxy the stab and rudder into place.

Now is a good time to add the plywood hatch hold-down pieces. For the Hafadussin use strips of UV plywood, 1/4 in wide, epoxied to the firewall and bulkhead across the fuselage. The 1/16 plywood hatch is held down with two small

Quote: "Fred Reese's Hafadussin from issue 02-75. A foam wing is used but with a straight chord it should be easy to develop a built-up wing." 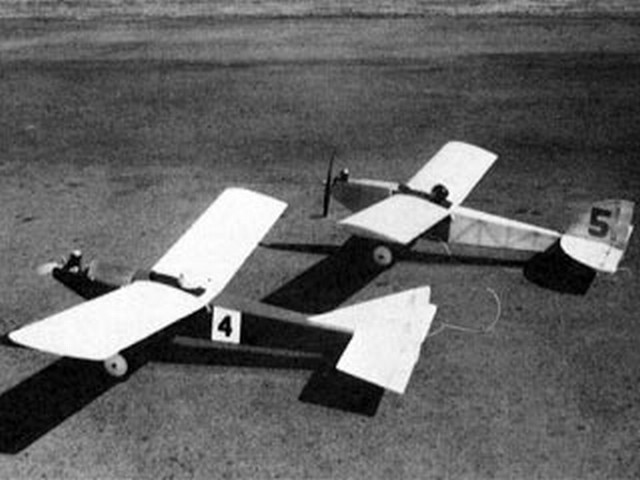