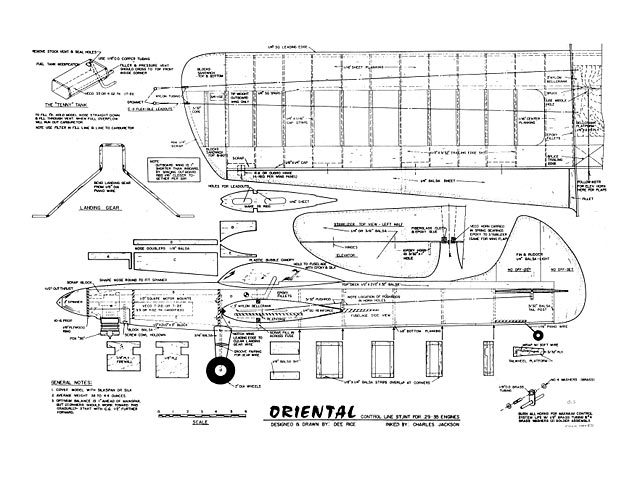 Quote: "A rare combination of aerodynamics makes this machine suitable for the competition flyer and his sport colleague as well as junior builders. Contest record has been outstanding, and the author may have developed a classic. MAN's 'Wild Bill' feels this stunter deserves attention. Oriental, by Dee Rice. Foreword by Bill Netzebancl

Since 1948, when the flapped symmetrical airfoil stunter appeared, at least 500 stunt machines have been published and some 50 rnore have appeared as kits. Each of these was the Ultimate winner according to the designer, and truly each of them had won quite a lot of hardware. Question - where are all of these winners now? Answer: Replaced by a better Ultimate winner created by the same designers (and some new ones). Problem: Each machine was developed, as opposed to engineered, resulting in a super-critical layout strangely suited only to the designer's style of piloting.

The Oriental, designed by Dee Rice, is a rare bird. It is a happy combination of geometry and construction that allows it to be built with a variety of CG locations and weights and still function at a competition level. Its builders include juniors, sport acrobats, and serious competition types, and they are ALL enthusiastic about its performance.

Getting Dee to release it for publication wasn't easy (he's modest) but we feel that it's an airplane that needs to be spread around (no pun intended, Dee). Until that ideal transition shinier comes along, the 'Oriental' should get you over the fence from profiles into competition stunt. We are proud to present the Oriental for your information and action.

In the early days of my career in precision aerobatics (the mid 50s), I was fortunate to be able to associate with two of the finest flyers and designers in the country, George Aldrich and Don Still. However, I got most of my help from Ralph (Bud) Tenny, well-known in indoor circles. Bud introduced me to contest flying, and I flew his design in combat for many years, placing third in the '56 Nats with it. The reason I am mentioning these three gentlemen is because they played an important role in the design of the Oriental.

George and Bud would have to share credit for about three-fourths of the aerodynamic design with one-fourth given to me for integrating their sometimes opposing views. Don Still's construction technique for the basic wing and the fuselage was copied, almost exactly, from his famous Stuka Stunt (oz6227). This speed and simplicity of constrution is the heart of the Oriental.

In August of 1957, after wearing out my third Nobler (oz6212), I reluctantly went to the local hobby shop for number four. After looking through several kits, trying to somewhat pick the wood I'd be using, I suddenly thought: There's got to be something easier to build. So I went home with, not a new kit, but about $4 worth of balsa (Man, those were the good old days! Knowing very Little about aerodynamics (probably even less now), the first thing I did was lay out an airfoil section, reasoning my french curve was about as good as anyone else's. Two weeks later the first Oriental was completed. The nicest thing about it was that it took less effort to build than any kit stunt ship that I had ever built.

Now, I am one of the guys who charges to the local school parking lot the minute he finishes a new ship (sometimes before) regardless of the weather; but, as luck had it, it was a beautiful day, for Texas. A nice steady 10 mph wind and clear sky, The Oriental flew just fine with only minor adjustments made by slight twisting of the flaps to level the wings. It did everything I asked without a bobble, wiggle, or sign of a stall. It flew beautiful sharp-cornered squares, and overhead maneuvers, and grooved like it was sitting on a table. Twenty flights and a week rater the Oriental won the Southwest Model Airplane Champion- ships in Dallas. Since then, it has won more contests in the Southwest than any other ship, except perhaps the Nobler.

Unlike many designs which, over a period of time, go through a series of design changes, the Oriental I fly now is almost identical to the original. The changes made in later models were mostly for appearance.

This ship has had great success with flyers of all levels of experience. For the newcomer, it is a snap to build and very smooth and safe to fly. For the advanced flyer it offers contest flying at its best with a minimum of construction time. Speaking of contests, I would like to mention that Tommy Morgan of Odessa, Texas, won first place in Junior stunt at the Nats in 1968. I am very proud of this young flyer and very pleased that he chose to fly an Oriental. I feel that this plane deserved a Nats' win - especially since I sort of, er, ah, choked in the finals at the '64 Nats and placed sixth instead of getting this fine ship a Nationals' trophy. Oh well, that's another story.

Like all models, this one needs to be light. Most of mine have weighed from 41 to 43 ounces with wry little effort given to cutting down weight. I know of one which weighed 37 ounces, and another which bent the scales at 56 ounces. This 56 ounce ship had such heavy wood in the tail that it took nine ounces of lead around the engine to make it balance. The wood selection is not at all critical, but, please, make the following choices:

There is another item which I consider very important in construction: epoxy the wing, rudder, and stab to the fuselage and make fillets out of several layers of epoxy. An easy way to do this is to smooth on a layer of epoxy to all fillets just before stopping construction for the night. After three evenings the fillets are made. By using epoxy for the fillets you should never get a fatigue crack at the leading edge of the wing or stab. One nice side effect is that once the stab is positioned parallel to the wing, it will stay there. Epoxy, unlike solvent release glue, does not shrink while curing. It's the shrink in glue that causes unwanted stab tilt, and such.

The construction part of an article is usually overly detailed and, to me, rather confusing. However, now that t have actually had to write a 'glue this to that' section, I can understand why it has to be detailed, especially for a design which appeals to beginner and expert alike,

I generally don't build one item at a time (ie complete the wing, then the fuselage, then the stab) but work on the entire model. While the glue is drying on one item, I work on another part. There are very few times during the construction of any model that a person cannot find something else to work on while waiting for glue to dry.

The first item in construction is to splice spars, leading and trailing edges. While they're drying, cut out the ribs, fuse-lage sides and the plywood formers. By now, the first items glued will be dry, and you may start actual construction whereever you like. I generally begin by assembling the ribs to the spars and attaching the leading and trailing edges, holding them in place with pins and rubber bands..."

Article, thanks to Pit.
Review. 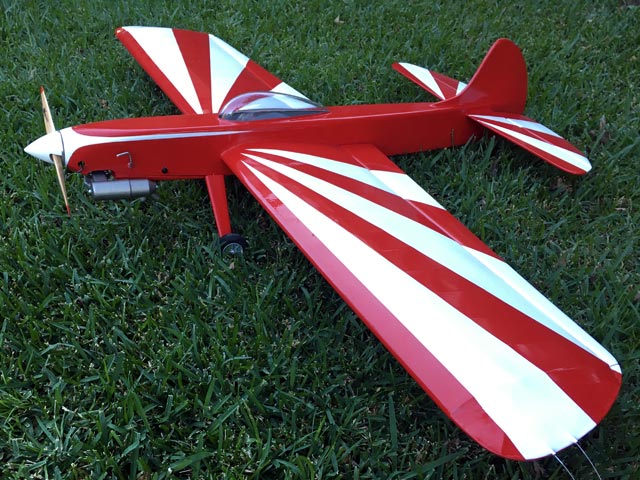 Morning, Like to share these pictures of my ‘Oriental’ built from your plan service [main pic, 007]. Model powered by Brodak 40 C/L engine. Thanks for a great site as this is not the first model I have built using your site. Regards and keep safe. From Australia,
Neil Alleyn - 27/04/2021
Add a comment