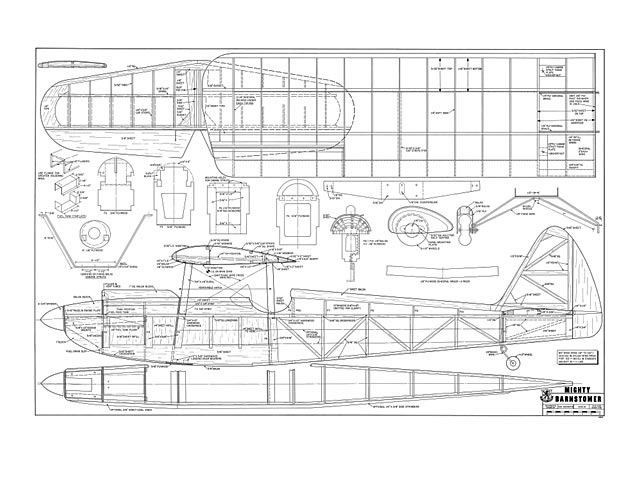 Quote: "90in of pure flying pleasure for the Sunday flier. Extremely docile and easy to fly, it will draw the crowds wherever you take it.

I was about to start this article by stating that I have a great fondness for large models but the truth is that I love all sizes of aircraft - from the smallest models to the largest full-size aircraft.

An extended Mighty Barnstormer with a pusher engine mounted above the wing has been built by a television producer in this country for camera carrying purposes. Mounting the engine above the wing was carried out to reduce the risk of vibration being transmitted to the camera, the latter located in the fuselage. Initial test flights show great promise and it is hoped that, with a 16 mm movie camera mounted in place of the pre-sent 8 mm one, results will prove good enough to use on television news and magazine programs.

Few sights can be more inspiring to the modeler than that of a large model carrying out a low, slow fly past or a gentle approach and genuine three point landing. The Mighty Barnstormer certainly looks majestic in the air, it has that correct 'sit', if you know what I mean, and one thing I can guarantee, it will certainly draw the crowds! If you do not like to be surrounded by a lot of folks when you are flying a model, then either do not build this model or find some uninhabited area to fly it in. Large size and scale-like appearance always seems to add up to crowd appeal.

For those of you living in an area that suffers, or enjoys, snow in the winter, I can thoroughly recommend the fitting of skis to the Mighty Barnstormer. With a low powered .60. engine in the prototype, the 100 yards or so takeoff on skis was something to behold and the landings, with that soft kiss onto the snow, make the standing about in the cold well worthwhile. Although I have not tried it, I feel sure that she would also be great on floats although, in this case, a .71 to .80 engine would be necessary to cope with the extra drag on takeoff.

For normal flying, a good .60 engine is powerful enough, the relatively low wing loading and clean efficient wing keeps the model airborne at quite low power settings. Despite its large size the Mighty Barnstormer is rugged and will take some hard knocks..." 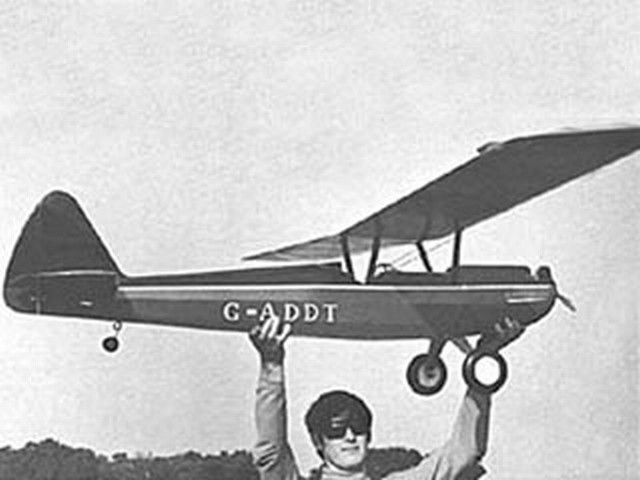 Hi Steve, again another fine plan of one of Great Britain's best and well known model aircraft designer, the unforgettable Mr David Boddington. Cheers. Regards,
Pascal - 01/04/2015
The color images attached are photos taken on the maiden flight day of our 1976 model Barnstormer that was restored over the last 2 years [more pics 003-010]. Maiden Flight was on 8 Nov 2015. This was its first flight in 33 years, as the late Peter Ohlson (who built it in 1976) last flew this model in 1982. Take-off was done with 1st stage flaps & landings with 2nd stage flaps. Power was more than enough from a "brand new" (i.e. un-run till now) 1970's K&B .65 Sportster engine and a 12x5 Prop. The way this Barnstormer flies is a living tribute to the man David Boddington - and I salute him for that. I simply love this aero model. Thank you for allowing us to send you images of our favorite aero models - and thank you for what you are doing for aero modelers worldwide. Your site is absolutely fantastic.
BernardandPetro - 15/08/2016
Add a comment