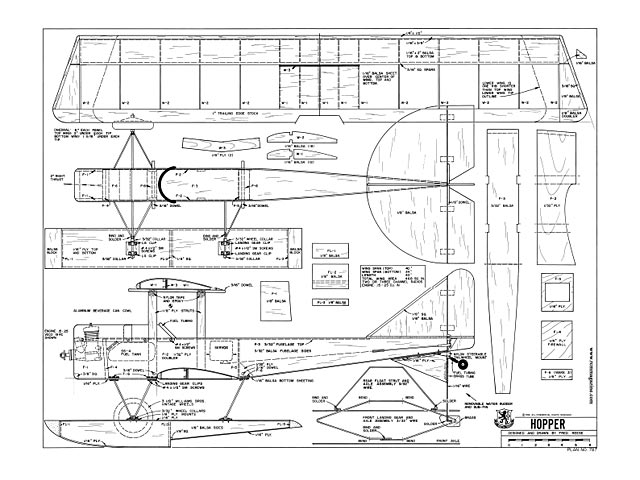 Quote: "The Hopper is an easy to build sport biplane with outstanding performance for two or three channel radios and a .19 for power. It can be flown with floats from ponds or snow and the floats can be exchanged for wheels in just minutes.

While going through my old magazines looking for some inspiration for a new knock-about airplane, I found a picture of a 1916 Boeing biplane on floats and that started the wheels turning. I really did not want to build a scale model as I needed something that would build fast, yet, I wanted something with character. It was then I realized that the top of the cowl of the Boeing biplane could be made from an aluminum beverage can - instant character.

The final design isn't the Boeing, but it could be. It could also be any one of a dozen other designs by changing the shape of the tail or wing tips or adding a turtledeck on the fuselage. The important criteria would be to keep the same dihedral and rudder height and approximate stab area. I chose to keep things simple and light and, as a result, the finished weight with floats is only 2-3/4 pounds.

I was concerned about the rudder and fin area with the floats and was quite nervous when I launched it for the first time. but I needn't have worried, everything was perfect. The model flies great, the rudder response is good with power on or off. The Hopper will do a nice slow rudder roll with either the floats or wheels. In fact, I was amazed that there was very little difference in performance with the floats on. The .19 has plenty of power, even with a muffler at 6000 ft.

I must be honest - this is my first float airplane so I researched many float designs and then built a set that did not work. I miscalculated the size and, although the floats would support the airplane, there wasn't enough of the floats left above water and I had a two winged submarine when I applied power. I modified the floats by increasing the thickness and changing the front shape until the Hopper would easily take-off from the narrow, and often too short, local pond.

The biggest improvement in take-off performance came when I changed from an 8x5 to an 8x6 prop and the take-off distance was cut in half from the resultant gain of a couple of miles per hour. The steerable water rudder and sub fin that is removable came from an earlier RCM article.

Rather than following the usual construction sequence, I will discuss various aspects of thy construction not readily visible. The fuselage is simply a box with a 'Coke can' cowl on top. The cowl is open all the way back to the 1-1/2 in Williams Bros. pilots for the engine cowling. Although not shown, glue a small piece of plywood on the inside of the engine compartment for the cowl mount sheet metal screws. After running the screws in once, put a drop of Hot Stuff into the holes to harden and seal the wood. Note that the plywood fuselage doublers are 3/32 narrower than the fuselage sides to allow the top to fit inside but not have to be notched around the doublers. It is easier to cover the fuselage and tail parts before assembly. Just cut away any covering where there will be a glue joint. Cover the cockpit area with black MonoKote trim and then epoxy in the cabane struts. Seal the edges of any trim colors or stripes with Hot Stuff to prevent them from loosening with time and oil.

Cutting the aluminum cowl was a little trickier than I expected as the can is much thicker at the bottom. First cut the can in half lengthwise using a razor saw. To cut out the bottom of the can, leaving,the rolled edge, I first scribed the cut with an X-Acto knife and then made several cuts with tin snips to the scribe, like cutting a pie. You can then bend and break out the wedges. The complete cowl is two pieces, a front and rear section. The front section of the cowl fits over the front of the rear cowl section. Use the rolled edge of the can for the front end of each cowl section.

The wings use basic construction methods except for the joining of the panels. One panel is built complete with the plywood wing joiner epoxied in place and all of the top sheeting added..." 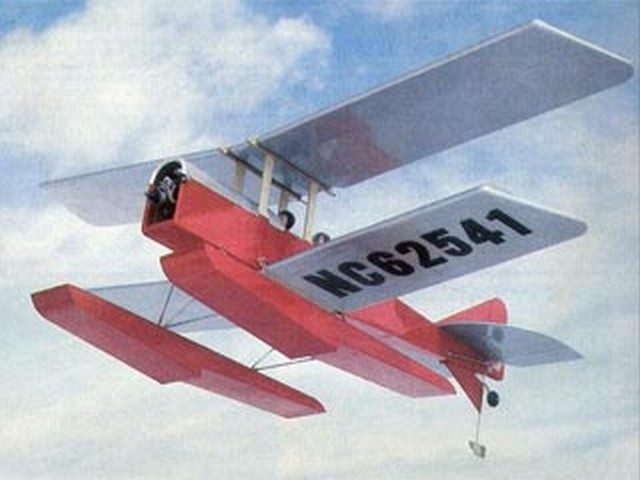