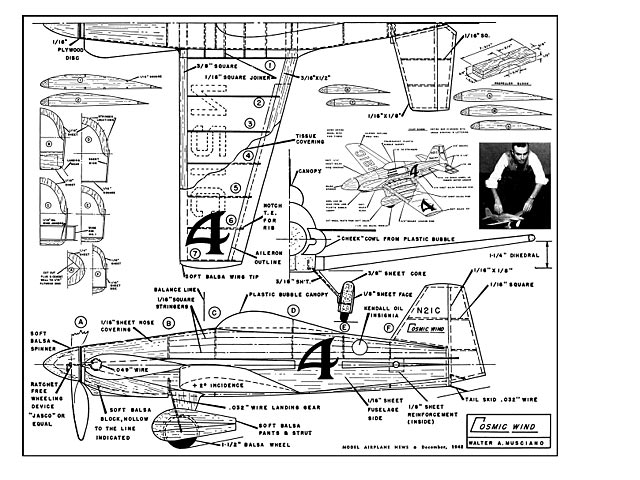 Quote: "This makes a fine rubber job, but the plans may be used for any other type model - they are made from official drawings with no outline changes. Cosmic Wind, by Walter Musciano.

ONE of the most interesting and oldest types of aircraft modelling is the rubber powered scale job. Yet modellers in recent years have shown a decided lack of interest in this absorbing activity, although a few outstanding model builders including Struck, Stahl and Lanzo continue with scale models.

This lack of interest on the part of the majority is not without reason. In the old days the 'modern' jobs - such as Curtiss Robin, DH Moth, Polish Fighter etc, - were perfect subjects for rubber scale models. But now it's different! Let's see you get even 2 minutes from a small scale F4U Corsair or other modern plane. You can't? Well, this article describes one that will top most of the modern 'good lookers.' Tony Le Vier and associates designed and built this sleek job, called the Cosmic Wind, as an entry in the Goodyear Trophy Race. Generous rudder and wing area, long nose, and sufficient dihedral make this design perfect for scale rubber flying.

Since its inception the 190 cu in Goodyear Race has gradually come to be looked on as the feature attraction at the National Air Races, because it encourages the development of original designs rather than the adaptation of stock military fighters to racing work. Three Cosmic Winds were entered this year and No.4, piloted by Herman 'Fish' Salmon of Van Nuys, Calif. crossed the finish line first with a speed of 169.608 mph. Incidentally, Cosmic Wind is one of the few all metal designs in its class.

The plans have been drawn half size; all formers and ribs are full size for the builder's convenience. Enlarging the plans is made easy by the preponderance of straight lines. First cut the fuselage sides from 1/16 thick balsa sheet (soft) and attach the crossbraces and nose former (A) in place. Be sure to cut a space for the wing centersection. Cut out the formers from soft sheet and attach only the top ones in place. While this is drying, the stabilizer and rudder can be made by pinning the specified stock to plan and cementing well. Using superfine tissue (not Silkspan) cover the tail surfaces and cement the stabilizer to the fuselage.

The wing is made in 2 pieces with centersection to follow later. When the wing panels are dry and soft balsa tips have been added, they are blocked up to correct dihedral angle, and 1/16 sq strips (hard) along with the leading and trailing edge are cemented in place between root ribs. Apply plenty of cement and let dry overnight. Cover the wing with tissue, then water spray and apply a single coat of dope. Attach wing to the fuselage bottom and don't spare the cement. The nose bottom is cut from a dead soft balsa block hollowed and cemented in place. Now bend the .032 wire landing gear and cement well to former B. Add the bottom fuselage formers and 1/16 strips. Cover the fuselage with tissue (use dope as the adhesive). Use lengthwise strips of tissue; you will find this job easy. Cement the rudder in place. Water spray and dope the tail and fuselage once. Check empennage for warps.

The 'cheek' type of cowl can be made from long thin plastic bubble canopies which are available at most hobby shops; they will save the builder time and effort. If bubbles are not available, cut the cheeks from dead soft balsa and hollow to about 1/8 wall thickness. When these are in place install the plastic cockpit bubble. There is no commercial bubble to fit this model but if the builder follows the author's procedure all will go well..." 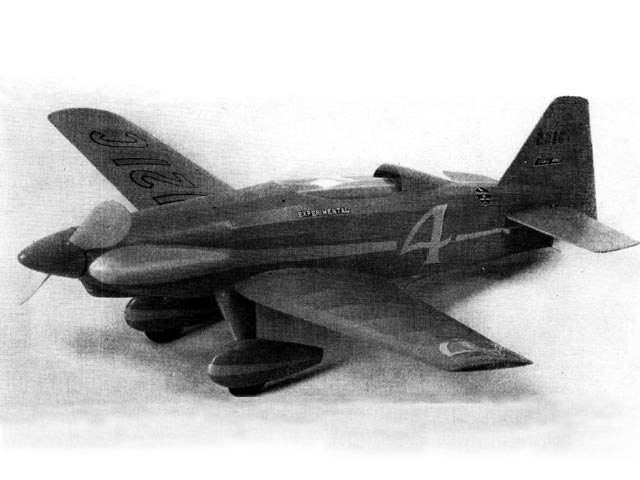