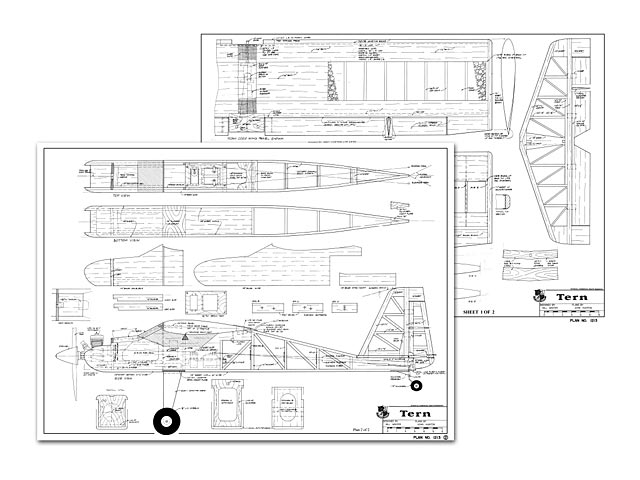 Tern is an airplane whose time had come. It is not a 'fashion figure' because emphasis is on its flight envelope and handling. After viewing a flight demonstration tape, your editors approved Tern as a project because of how it flies. Since form follows function: outlines only bow to basic cosmetics. When it comes to flying, it is a feisty critter.

In searching for an 'optimum flying airplane,' I have asked myself myriad questions: Is it possible to have a toss-around acrobatic machine that is also trainer stable and stays where it is put? Can hands-off flight dihedral be employed without detracting from aerobatics? How fast? How sensitive? The result is not a primary trainer. Tern is easy to fly, but it is for people who have soloed.

Provided that one determines precisely what is wished in every respect from take-off to landing, it is feasible to write a prescription for performance which is based on hands-on experience. Them are many fine model airplane designs of all types, but the aim of this design is to tailor one popular type precisely to optimize the result.

The .28 powered Tern is a happy combination which is sized between the .40 jobs and the .15s. Tern is just as capable as the bigger .40 models with its 18 oz wing loading, but it is simpler, quicker, more transportable, less expensive, and actually more crashworthy than a bigger ship. Compactness and proper mass distribution are important for the desired handling.

The technical details are: aspect ratio of 5.3, 580 sq in wing area, an NACA 0015 fully symmetric airfoil (the same family of foils that was used for the B-17) set at 2° positive, a compact tail moment arm with a horizontal stabilizer area of 130 sq in (22.5% of the wing area), a vertical fin area of 8% of the wing area, a long, high nose with slight down thrust (to minimize power variation transients), 'overstable' rigging with the CG at 27% of the chord, 2-1/2° of dihedral, all coming together to make the Tern as harmonious in every respect as possible.

Tern has the right balance between sensitivity and smoothness with small area maneuverability. It will turn without dropping its nose because of the relatively high forward profile and low rear profile, also because of the thrust line, CG and decalage relationships. All of these and other aerodynamic 'tricks' are common knowledge, but how they are combined is equally as important.

The short tail moment facilitates pretty free-style, off-the-cuff maneuvers, close-in and low-down if you are given to hot-dogging. All formal stunts - loops, inverted, rolls, outsides - are nimble and precise, and to ice the cake, an 83 year old can reduce power to cruise and enjoy. Some may wonder about the lack of a long tail moment, considered essential by some for good directional stability. I prefer adequate directional stability, yes, but too much is overkill, showing up in certain maneuvers on a windy day.

Construction. Careful wood selection is vital for minimum weight. Consider that if a cubic foot of balsa was required to build the model, the wood weight would be 4-6 lbs. if light wood was used. That weight would probably be doubled if all hard balsa was used. Fuselage sides, doublers, and all blocks must be quite light (but not mush). Sheeting can be light. Longerons are medium. Wing leading and trailing edges and aileron spars are medium, wing skinning is light. Stab and fin spars are hard, with medium leading edges and light cross members.

Fuselage: Sides are 1/4 in sheet, back to the wing trailing edge. Longerons run aft to the rudder hinge line. Note how the longerons..." 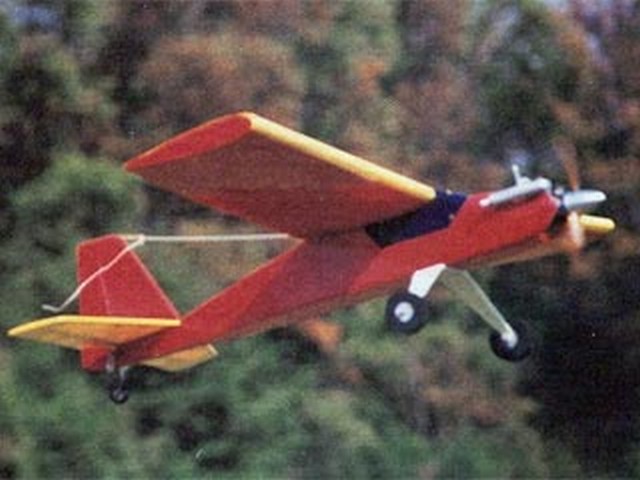