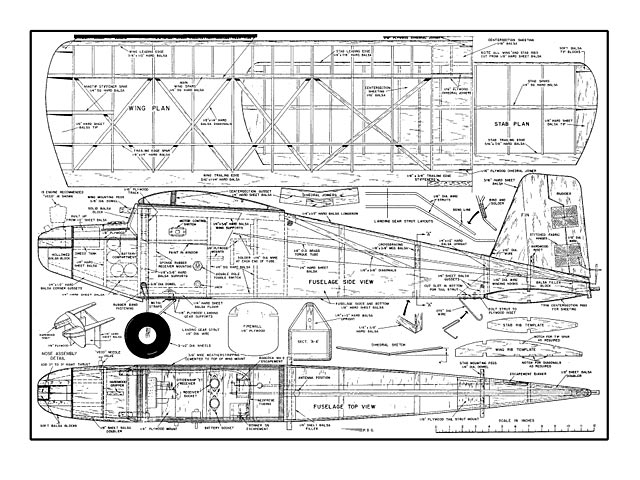 Quote: "Knock off long, lazy hops with this practical RC ship for 19's. Excellent for beginners - or jangled nerves. Gramps, by Bill Winter.

This is a pleasant-to-fly, easy to-build rudder airplane built for .19 power. It is an ideal sport job for any-one who finds the .09 planes too small or too underpowered for his taste. Because of its many very high, leisurely flights, the ship was dubbed 'Gramps'. Originally constructed as a test vehicle for advertised radio equipment, Gramps proved itself a machine worth reader attention. It has flown without difficulty, including landing nearby, in a 25 mph wind with gusts to 35 mph.

During the winter of 1955-56, an .09 powered Rebel (oz5553) was constructed to test various two-tube receivers. About that time vagaries in the gas tubes themselves led to substitution of a hardtube receiver, which happened to be the Citizen-Ship kit, as shown in pictures last month. The Rebel proved to have noteworthy characteristics. For one thing, the upslanted, flat-bottomed nose, minimized broken props, the cost of which is the busy flier's biggest expense, more so than batteries. The combination of a Lorenz MOPA transmitter (supplied for the tests by Essco) and the receiver led to high flights during which the transmitter was shut off and the plane allowed to soar. Eventually, the Rebel was adjusted a bit like a free flight, with left on power, and right in the glide, for thermal riding. Then bigger batteries became desirable.

A very approximate scale-up of the Rebel was used to make Gramps. There was no plan, the ship being made 'in air', so to speak. Many flights were made with a K-45 battery and three intermediate flash light cells, two on the Babcock Mark 2 escapement and one for filament. But flights grew ever longer so the three intermediates were increased to six, which the ship carries without difficulty. In fact, the glide is more penetrating and efficient. One almost never has to change batteries and, regardless of the number and length of flights, can fly for many weeks before a drop of even one-tenth is noted on the filament.

Anyone who can build an RC model has no need of directions, especially since materials are noted on the plan, which is available full size. However, a few background facts are interesting.

The ship is so designed that with a .19 engine and a sport fuel, a high altitude will be reached slowly on about an ounce of fuel. This was true of the Veco .19, which seemed to be unusually economical. A two-ounce tank gives a very long flight with at least two spin-downs necessary to avoid climbing out the top. The props were 11 x 4 and 11 x 5's. The former is a bit the lazier. Even in a nose-light, nose-up position, the plane will complete 360's under the power once the turn is established. On a hotter fuel, with faster climb, however, the ship will break out of the turn, once begun, before 360, and resume climbing straight-away, unless the rudder is held long enough to put the nose down into a racing turn.

If trimmed tail heavy, CGramps will hang almost motionless in the glide but will not swoop off, out of the wind. It is better, of course, to have a faster glide because tip-stalls, on a gusty day, frequently cause what looks like an interference spiral which may make more than a full turn before opposite rudder effects a save. Unlike the Live Wire (oz5554), to which Cramps is a distant cousin, due to its Rebel inspiration, this ship cannot be rocked back and forth near the ground before touchdown to affect a flare out. The amount of dihedral prevents yawing. If a flare-out on rudder is desired, a slight turn has to be started about 6 to 8 feet off the ground, then opposite rudder applied and held. Due to designed-in down-thrust (not apparent to the eye), resulting from the positive angle of both wing an tail, the launch is apt to go out flat. Therefore, as is true of any such ship, a lower pitch prop, such as a 10-1/2 or an 11 x 3, may pull the ship into the ground before the wing lift builds up with increasing air speed. Low pitches are for the birds anyway, since, after a nose-down launch the Climb tends to become mushy and the plane 'drops dead.' If the launch can be affected with a moderate pitch, the rest of the flight is lighter on its feet, and not so locked into rigid grooves. This is not ideal for all manner of stunts but we are talking here of a sport ship not expected to stunt.

Materials and covering are of the strongest. The ship is extremely strong. For rudder only, some weight can be wasted (from the multi man's point of view) for sturdier frame and bigger bat-teries. Heavy nylon was used throughout with six coats of aircraft butyrate plas-ticized with six drops of castor to the ounce, followed by three coats of colored butyrate. Color scheme was red and blue.

Battery packs with soldered cable-and-plug leads were used. With big batteries there is no replacement problem - besides a spare set, cable and all, can be carried. If you use boxes, it is suggested that, if possible, the top nose opening be made bigger, and the boxes arranged on a vertical sliding tray, the box bottoms forward. If placed under a false floor in the cabin, retrimming is necessary. If you use metal boxes, be absolutely certain to wrap rubber bands around the boxes or to spring load the ends for a reliable contact under vibration. Wing hold dowels are extra thick. Quarter-inch thick dowels simply are not dependable in pull outs, especially after oil soaking. The rubber weather-stripping applied around the cabin edges was fastened with Pliobond. This keeps out dirt and exhaust fumes, helps prevent wing shifting and rattling. The facing-front dowels through the windshield are far better than a dowel across the ton front of the cabin, which like as not, will rip up the bulkhead in a crash. The shock gear was the second on the plane - others have used it, so Gramps borrowed the idea. Wheel position is back far enough to encourage experiments with take-offs.

In the side view, the front cabin former may seem confusing. The main bulkhead is sheet as always. But, due to position of the front wing hold-on dowels, it is impractical to drop in a wide receiver slide when the receiver is mounted vertically - the dowel thickness would he cut away more than desirable. So, a second bulkhead, made of 1/8 sheet, is constructed behind the main bulkhead..." 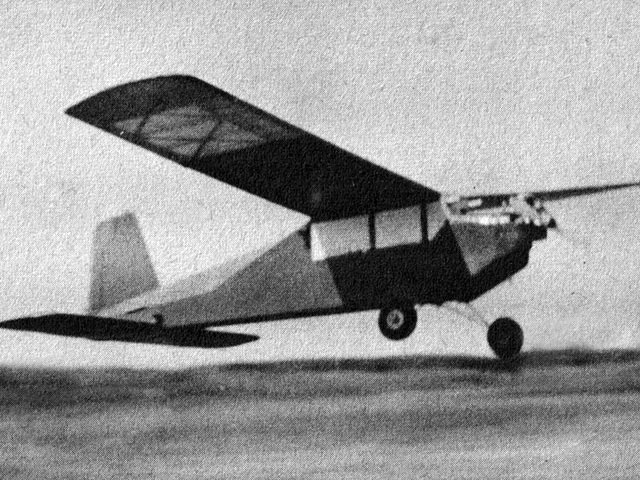 This design has Bill Winter written all over it. In the AMA biography of Bill, he is credited with the design. At that time, he was editor of Model Airplane news and frequently published his designs under another name, usually John Sprague. Maybe he just omitted his name from this one. Paul Del Gatto drew up the plans, as his initials are shown on the sheet.....
DougSmith - 29/03/2015
Thanks, have put Bill Winter as designer now
SteveWMD - 29/03/2015
Add a comment