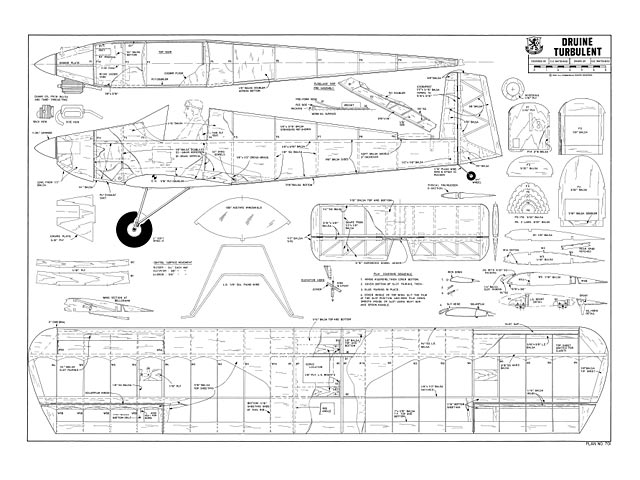 Quote: "If you're looking for a stand-off scale model that flies as well as it looks, you won't find a better subject than this .15 to .25 powered Druine Turbulent. A magnificent aircraft that will be a winner in stand-off scale contests in the coming months. By Flt Lt Gordon Whitehead.

I don't think that the Turbulent will need any introduction to regular RCM readers owing to the article on Franz Meier's Druine Turbuient (oz8216) beauty which was featured within these pages last year. However, my model of the ship is totally different in concept to Franz's exquisite creation, being for general sport flying. You see, I like aerobatic models, and admire the virtuosity of all who compete seriously in FAI aerobatics. Not having time to practice sufficiently, I can't aspire to joining the ranks of the precision pattern exponents, but still thoroughly enjoy throwing my scale models about. In fact, I think that the best advice to give to a flyer who has reached the 4-function low wing stage using, say. a .40 powered New Era II (oz9439) or similar, is to study the FAI schedule and practice it. Yes! Even for sport flying. By the time he's got most of the maneuvers recognizable, he'll be competent and confident enough to fly any ship and rescue almost any situation. Notice that I didn't say he had to perfect the maneuvers - just get used to seeing and controlling the ship in all attitudes and through recognizable and reproducible evolutions.

Well, after that harangue, what has it all to do with my Turbulent? Certainly the full size ship isn't noted for its ability to fly Aresti patterns. However, besides possessing very shapely outlines, when built to a fairly light wing loading, using an adequately strong, but not beefy structure, she becomes a fantastic performer. Many modelers would expect to see a .40 in this size of ship, and hope to perform such things as vertical upward rolls until out of sight, and high speed fly-bys that leave the pulse racing. Well, with a .15, this ship will just about do half an upward roll before flopping out. When you perform a fly-by, she trundles past and you can study the pilot's facial e-pression. But when you start waggling the sticks, she'll perform wonderful antics in slow time that give you satisfaction because you can follow every movement. The secret is to use gravity and real wing lift to supplement the flea-power up front, and in using the last gram of energy from every position or movement of the ship.

The fixed slots were an attractive and unusual feature of the full-size ship, intended to inhibit spinning. So all you chaps who are terrified of tip stalls should experiment with this little gem. The purpose of the slots is to maintain unstalled airflow over the wing tips and ailerons at high angles of attack, thus delaying tip stall until well after the center section has lost its grip. They increase their effect as the angle of attack is increased, making turning and landing maneuvers safer. On the model, the ef-fect of the slots is manifested by a marked reluctance to spin upright (even though she'll spin like a top inverted) and by powerful aileron control at slow speeds. Even when the middle section of the wing is stalled, and the model is 'mushing' downwards with full elevator applied, you can pick up a low wing using aileron with no fear of flicking out - with a little practice of course! More on flyability later. The foregoing was just to get you interested!

Construction. General: The structure is rib-for-rib, and sheeted where the full-size is sheeted. The rear decking can be sheeted with light 1/16 balsa, but I preferred the stringered early version. Construction is simplicity itself, but becomes even simpler if you pre-cut all parts. One evening's work will produce a kit of parts and help to keep the building board clear during the assembly stage.

Fuselage: Contact glue F1 to F1a. Glue the 1/8 square and 1/8 x 3/16 longerons to the fuselage sides, followed by uprights and the large doubler at the cockpit/wing seating. Follow the pre-bending procedure described on the plan when fitting the small front doubler. Note the grain directions. Next join the fuselage sides with F4 and the sternpost, then add formers F5 to F9 and crosspieces, ensuring squareness..." 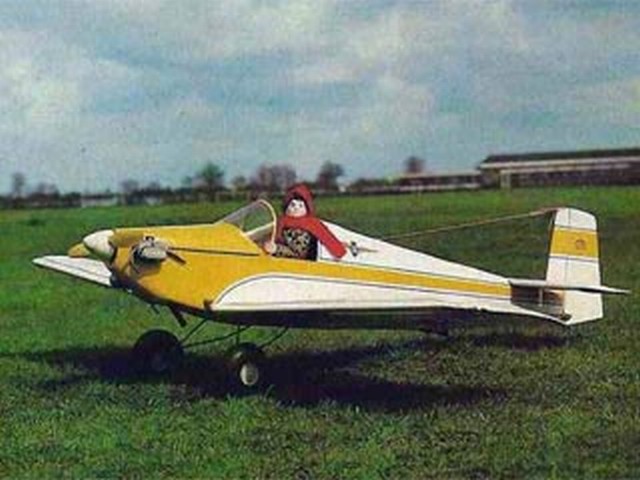