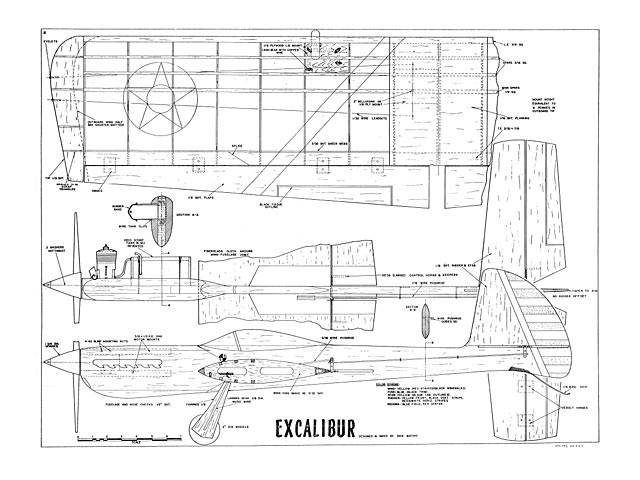 Quote: "Several of my 'friends' when they learned the name of my latest brain seizure, have likened it to another somewhat different 'Excalibur,' which according to myth, was King Arthur's sword. The sword had been imbedded in solid stone for centuries, and the strongest of men had tried vainly to pull it out. King Arthur, as a boy, succeeded because he was the only one who was pure of heart, which was the only way to remove Exalibur. It made him invincible because it was magic - or something like that. You can guess how the rest goes. Said friends predicted that I would also bury my Excalibur too deep for anyone to get it out of the ground, the first time I flew it. I haven't yet, but I do hope to bury a few myths about stunt design however.

I'll bet many of the persons reading this article will not notice that the Excalibur is a profile fuselage design until they read this sentence. This is one of the first myths I want to bury - that profiles never look like a first-class airplane. The Excalibur never fails to draw admiring attention on the flying field, and this is nice for all flyers, whether they fly only for sport, or in national competition. We all like for our models to please the eye, and this is one of the Excalibur's strong points. I like a design that looks racey, efficient, smooth, and uncluttered, and these are words other flyers have used to describe the Excalibur, so I think it fills the bill.

All right, so it looks good sitting still, but so does a grand piano - that doesn't mean it flies. Fortunately (no matter how scientifically you design, you still have to have a little luck) the Excalibur flies as well as any stunter I have ever touched. I think this is another myth buried, because, for some reason, most of our influential designers, seem to think that when they work up a beginner's stunt ship all they have to do is make it as simple as Tinker Toys and they have met the requirements. Personally, I have tried to fly a pattern with many of these beginners bombs and they are much harder to handle than a 'super' stunter. I would hate to have to learn loops, eights, upside-down, etc on those trucks. It seems to me that a ship for the beginning stunt flyer should be able to fly all maneuvers as well as the best, because this leaves a 'safety-reserve' of maneuverability for those inevitable tight spots we all run into when learning.

The rebuttal to this argument is typically that most beginners can't build a ship capable of really good performance. I think the truth is that most designers can't design a ship beginners can build easily, yet will still fiy well. Beginners aren't so dumb, but I'm beginning to wonder about us designers. Excalibur is as simple as any popular profile kit to build, and it doesn't take special skills to make it a fine flier. I hope any younger modelers who read this will study the plans closely and accept what may be a challenging project for them to handle - but with the assurance that this is the only way to improve their skills and achieve a worthwhile goal - more fun with models.

As I have it set up on the plans, the Excalibur is in full competition dress. It has flaps on the wing, 45 degree control surface movement, a semi-pressurized tank, landing gear in the wing for good ground handling, and a colorful trim scheme using Japanese tissue and clear dope only...." 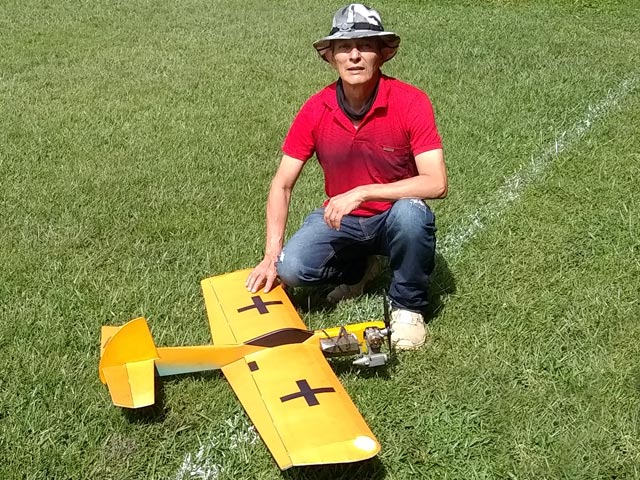