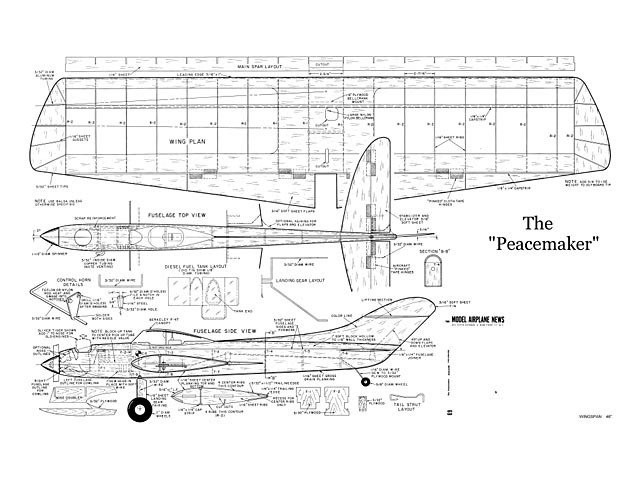 Quote: "One of the all-time great stunt designers and fliers considers this sleek ship to be one of his best. Built around the Oliver .15, takes engines up to .29 displacement...

My first acquaintance with diesel engines came a little over ten years ago. Our modeling group, which was pretty much by itself in the Lower Rio Grande Valley of Texas, was then flying such models as the Jim Saftig Super Zilch (oz265) powered with big Anderson Spitfires, Orwicks, etc. Much to our dismay, one Sunday a member of our club appeared with a big Zilch and, you guessed it, there was a diesel up front.

Some may remember the old Drone diesel, designed by Leon Shulman. The Drone, when perking along on its 50% ether, 50% castor oil fuel, and swinging an 11x10 prop, not only got the Zilch off the ground but could pull it through any maneuver the 60's could! The Drone was only about a 29 and it was pulling a 60-sized model with the coil and batteries still in it. Pretty revolutionary for those days.

About two years ago, the author obtained an Oliver Tiger .15 diesel from England with the thought of trying it for an International stunt design. To appraise its potential it was installed in an old battle scarred Flite Streak (oz2652). Sure enough, on 60-foot lines the little .15 pulled that oil-soaked wreck around like a .29. The remarkable thing was that the lines stayed tight over the top of the circle.

So far we have heard only that a diesel has plenty of power to pull around an abundance of weight. Before we go any further, let's discuss what this means on the end of the lines. We have all heard a model powered with a glow engine leaned out on the ground and as soon as the model was launched it began to "come in" (gain rpm). The reason for this was that glow engines do not develop their full power while being "held down" The big difference with a diesel is that it develops almost all of its capable horsepower while still on the ground. It will pick up some when released, but not as much as the glow engine does. In the same vein, if we have two engines, one glow, one diesel, both of the same displacement, the diesel would haul a heavier load than the glow engine because it developed more power or torque at lower rpm's. It is something like a car pulling more in low gear than it can in high gear.

Out on the end of the lines, this means that you experience very little, if any, of the slowing down in maneuvers that you are accustomed to with glow engines. Thus, from the time your model is launched until the engine quits you have constant engine pull, even when the engine burps or changes from "four-cycle" to "two-cycle". Last, but by no means least, the model flies at almost the same speed whether it is climbing or diving.

So a design was arrived at that would handle this power yet not be outsized - enter the Peacemaker. While the model is basic, it presents the best general arrangment while still being unique in appearance. Full-span flaps are not necessary as the sharper tapered trailing edge gives ample area. This also put the movable area in close to the root where it is more efficient; and cuts down on tip wobble.

While the Peacemaker is basically a diesel design, engines in the .19 to .29 range will do nicely. For glow engines and powerplants under 6oz, it is suggested that the nose be lengthened 1in, moving the engine and firewall F-1 forward the same amount, so as to have room for the larger tank capacity that glow engines require. A .15 diesel will run about 15 or 20 minutes on three to 3-1/2 ounces of fuel. A diesel requires much less than a glow engine. Also, for those who want a less sensitive model, the additional inch to the nose will make the Peacemaker react smoother.

There are only two critical points to watch in the building procedure. The wing must be warp free and the center of gravity should not vary more than 1/4in either fore or aft from the given position. The drawings and photos are self explanatory, except for the wing which utilizes a new construction devised to be warp free and extremely rigid even before covering..." 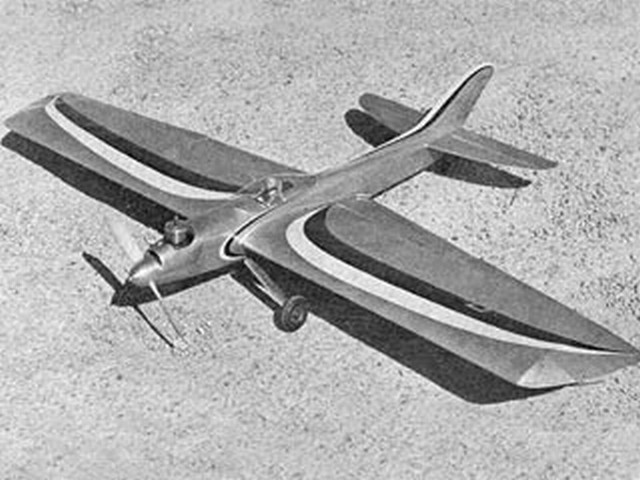 Here is a couple of shots of my recently completed Peacemaker [more pics 003, 004].
EricBoehm_NJ - 23/03/2018
A challenging build from scratch, but very worthwhile. Mine is powered by .15 PAW TBR and it pulls really nicely.
Brendan Perring - 25/08/2020
Hello, Thanks for all the effort that has gone into Outerzone, an amazing site full of joy. Having somewhere that all my childhood dreams of model builds are safely stored for the future is an incredible resource! The history of model engineering is in good hands. Here are some pics for your page on the George Aldrich full fuse Peacemaker [007-011]. A very challenging first scratch build for me, but got there in the end. Powered by a .15 PAW TBR. All the best,
Brendan Perring - 02/09/2020
Add a comment