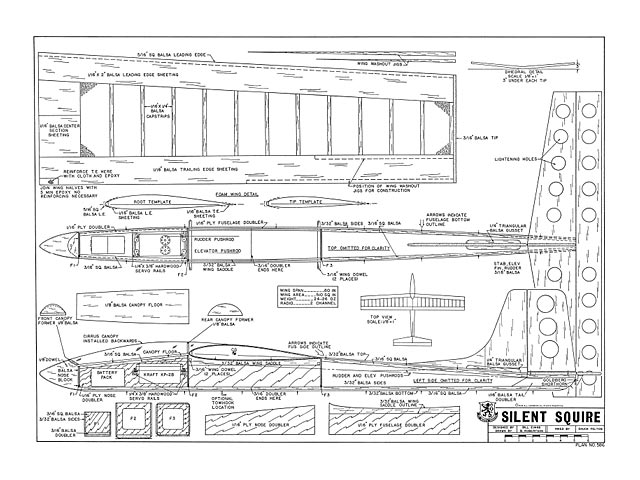 Quote: "A quickly built 60 in span sailplane for slope or thermal flying. Highly maneouverable, the Silent Squire is also stable enough for hands-off flight. Coupled with a light wing loading is a wide speed range, excellent penetration, and a ten foot stall recovery.

The Silent Squire was designed and put into the air for you, the R/C sailplane enthusiast. It is a combination ship that is equally at home off the tow line and on the slope. She holds her own with thermal craft and, due to its smaller size, goes out of sight sooner. On the slope she turns like a racer, performing tight inside and outside loops with ease. With practice, the Silent Squire flies well inverted and the snap rolls and tail slides are something to behold.

This craft is a product of the search for a glider which could well meet several desirable requirements, those being:

(1) It must be stable and fly hands off and therefore easy to fly.
(2) It must be easy to build and repair.
(3) It most have thermal capability.
(4) At command, it must be capable of tight turns and be highly maneuverable.
(5) Stall recovery height must be less than ten feet.
(6) It must have a wide speed range.
(7) The wing loading must be under eight ounces.
(8) Construction should permit total flying weight to be under thirty ounces.
(9) It must not have a wing span greater than 60 in.

Built per plans the Silent Squire flys hands off while gentle pressure on the stick will produce smooth movement. If you push the control to the limit the Silent Squire will streak. The ship flys itself, yet is very responsive to the pilot's command.

For those who am heavy handed on up elevator you will find that, when you get the Silent Squire to stall, the recovery is quick, usually losing only about 3 foot of altitude, while applying some down stick will, in most cases, produce an altitude gain in the recovery. Let off of the controls on any maneuver and the Silent Squire quickly stabilizes into normal flight position. All of the 25 or more Silent Squires that are in the air today have, like the original, performed excellent from the first flight.

On the first flight, and after you have gained some altitude, apply trim as necessary. Make a few gentle turns using the rudder in order to get the feel of the ship. Then, start pushing on the controls. When you are ready, apply full pressure on the controls and your Silent Squire will really move. After awhile you will find that, in order to make nice turns, you will be using more elevator than rudder. The best turns are made by first using the rudder to bank, then applying full elevator will whip the Silent Squire into a full turn. As the ship comes around, use some opposite rudder to correct.

The wing is a foam core with a minimum of balsa skin to hold it together. The foam is great - it just doesn't puncture or cave in like the conventionally built wing. Repairs are extremely easy - just a bit of 5 minute epoxy does the trick.

Bruce Robertson of Woodland Hills, California, proved how strong the construction is by flying the Silent Squire until his receiver batteries failed. The elevator stopped in a down position and the terminal velocity dive 700' down the backside of the flying hill got his Silent Squire going over 100 mph. On recovery the ship was found with the nose buried about 8 inch into the hillside. The wing was not damaged, the fuselage was split in several places and repairs using 5 minute epoxy took about an hour. On the following day, Bruce was back in the air with his Silent Squire, flying without evidence of the previous days damage, with, of course, fully charged batteries and limiting his flights to under four hours.

Ease of building was of utmost importance during the construction design. It takes about 30 minutes to assemble and glue the fuselage parts. The wing is 1/16 sheet covered foam, which is almost indestructible. Conventional sheet tail feathers are also utilized..." 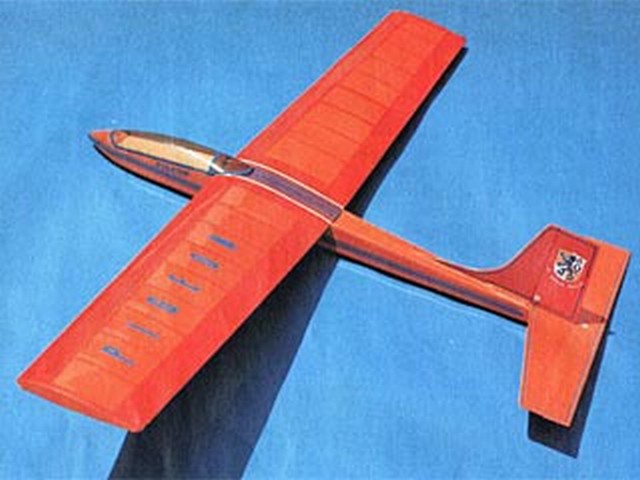