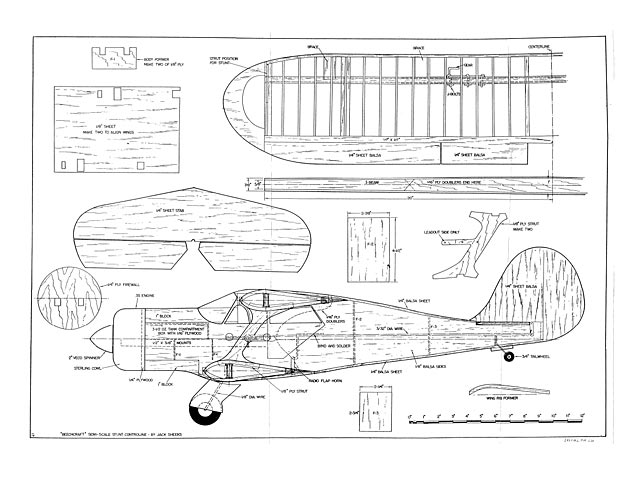 This plane evolved over a period of 3 years, starting in 1960 with Bob Schubert, a fellow clubmate. Bob always liked double-winged planes and was continually striving to build one that had the realism of a real plane, and yet would do the AMA stunt pattern. He made some beautiful SE5's, and Fokker D-7's from Flying Fool (oz4414) kits. But none seemed to perform outside manuevers without mushing. He lost two planes on outside squares.

While discussing the accidents he asked me if I would try and design a plane that would perform the way we thought it should. After many sketches and trails we found that with the upper wing staggered forward of the center of balance that it created havoc on outside stunts. So we decided that the reverse stagger of the Beechcraft would eliminate this factor, if there was enough distance between the two wings to overcome one cancelling out the other. And it worked too.

The maiden flight of the 'Beechcraft' was amazing. I was able to do outside squares, loops and triangles, wingovers, horizontal eights and over-heads. We tested it with and without the use of flaps and found that without the flaps the plane turned as smooth as any big stunt ship. With the flaps we found it to be sensitive but still smooth. The leadouts had to be moved forward and out to prevent the tendancy to yaw in tight corners. More weight was added to the outboard wings to keep them level in flight...." 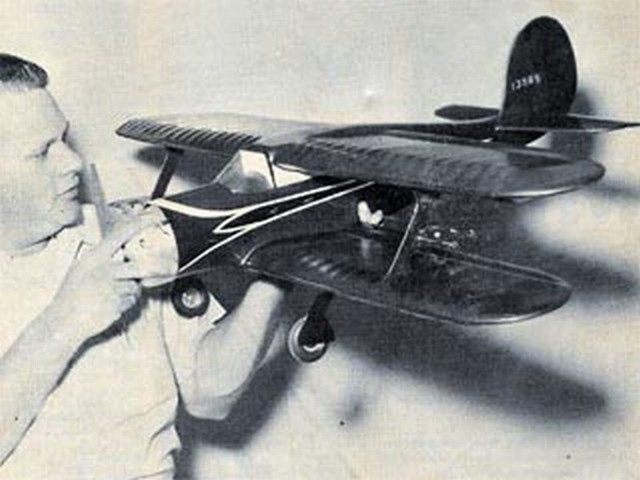