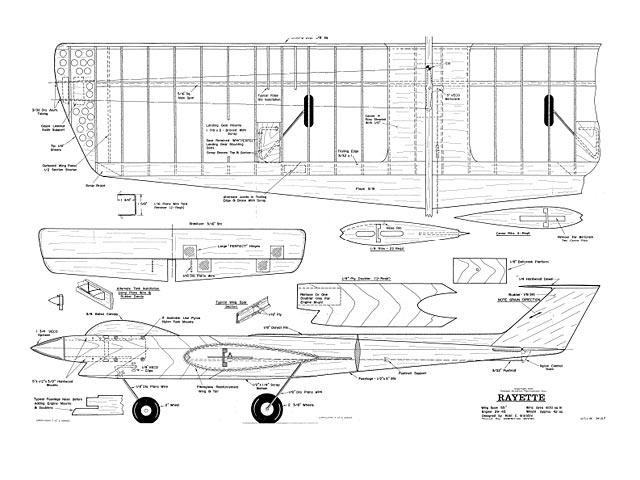 Quote: "This fine handling stunt plane is intended for AMA Junior Control-line flyers and as a practice model for the polished competitor. Easy to build. And tough! Rayette, by Bob Gialdini.

After returning from the World Championships in Budapest in 1964, I attempted to evaluate the reasons why we are having difficulty keeping the younger modeler, as well as recruiting new Juniors to our ranks. Searching through the magazines did not fully explain the situation, but some conditions were evident. The definite lack of the in-between-type of model that would appeal to the younger modeler, without requiring the amount of time needed to produce a fully competitive stunt model. I feel that I am as guilty as anyone in not producing such an airplane. Both of the designs that I have originated have been the fully competitive type, so suited to my own needs.

Thus began a series of sketches to produce an in-between-type of model that would have good handling characteristics, and even more importantly, could be easily and quickly built. The result is the Rayette, a profile stunter of average size, but fully capable of performing the entire stunt pattern we have today.

Before entering into a discussion of the building method, I would like to digress, for the moment, to clarify a few points about Precision Aerobatics. Within the last few years, much has appeared in print about this event and very little of it favorable. We're in a rut - has been the general consensus of opinion of most people. Some are not contestants in this event, or never have been. Secondly, after the 1965 Nationals, with a total of approximately 76 contestants in this event, biggest since 1958, it appears more people are enjoying being in this rut.

I can't imagine why everyone is constantly taking pot-shots at stunt. A comparison with other events only points out that stunt has been producing better looking and better performing models, and considerably better pilots. If the trend is to the Jet Type models, doesn't this appear to be quite natural, for we are no longer flying Jenny's. Granted, it doesn't take a Jet Type stunter to win and we have had quite a few fine looking and performing models of other types, but I don't feel their appearance has that much effect on today's judges. After the model is airborne, small attention is paid to the type of model being flown, as is my experience while judging..."

Article pages, text and pics, thanks to pit. 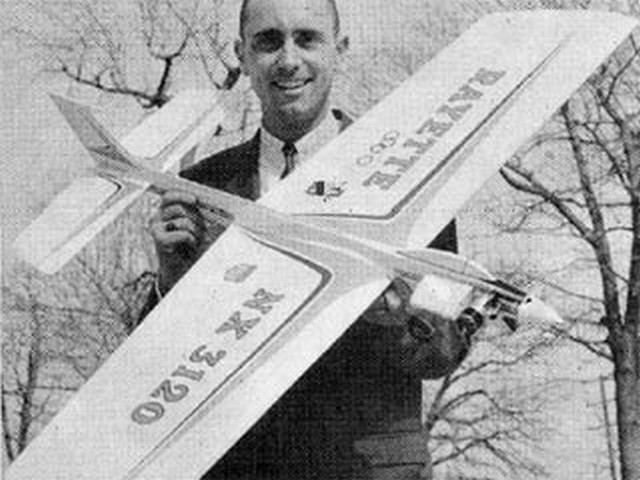