Learning to fly Stunt is a difficult and sometimes frustrating experience, I clearly remember tearing the rudder off of my Magician (oz4660) five times by hitting the ground inverted while struggling to mas-ter the outside square loop. Luckily, I managed to buy a couple of good Stunt ships before I was able to build one sufficiently well myself. These airplanes hastened my learning process and helped to hold the mortality rate low enough that I learned to Stunt before reaching the point of quitting from frustration. If you want to fly Stunt and don't have the help and encouragement of an experienced Stunt flier, then you need (as I did) a couple of good airplanes, preferably simple ones which can be quickly replaced.

I'd like to help if I can. Instead of using my theories and experiments solely to develop more realistic semi-scale stunters, I decided to try to apply the same effort to a simple airplane for the beginner, I also wanted an airplane sophisticated enough in concept and performance that it literally MUST STUNT, even in the hands of a beginner.

The first Mustunt had a built-up fuselage and a wing-mounted landing gear to improve its appearance. This configuration is now called the Mustunt II. Reflecting later on the theme of simplicity, I decided further simplification was possible without hurting performance. As long as I retained identical moments and areas, a profile airplane could have nearly identical flying qualities.

Visualizing the perfect basic stunter. I threw out the Mustunt II's built-up fuselage, shaped wing tips and wing-mounted landing gear. The engine had to be retained in either an upright or inverted configuration to keep all elements of the fuel system in the same geometrical plane. This insures a competition type engine run which is difficult, if not impossible, to obtain with a horizontally mounted engine. The only aerodynamic feature or adjustment not retained was the inverted bellcrank for a forward up leadout. While desirable, the forward up leadout was deemed less important on a Profile airplane than conventional control arrangement. The result of this extra work is a competition quality Profile Stunt ship which I call the Mustunt I.

To make either Mustunt fly well, you don't need to understand the reasons for its odd (ugly) layout. In fairness however, I should be allowed to explain how the demands of simplicity and performance left little opportunity to add glamour. While the explanations below occasionally refer to the Mustunt II, the aerodynamics apply equally to both Mustunts as their moments and areas are, in fact, nearly identical.

For good vertical performance and extra line tension, a Stunt ship should have a high power/weight ratio. To obtain a high power/weight ratio with an average Fox 35, or for that matter, any Stunt .35 to .40, the Mustunts were made smaller than most other similarly powered airplanes. Their smaller size also tends to keep the weight down somewhat and makes the Mustunts very easy to transport.

To improve the Mustunts' turn, I shortened the noses a little. The short nose Mustunts have lower moments of inertia which enable them to turn more easily and stop turning more smoothly with less chance of bobble than our longer nose airplanes. The short nose of the Mustunt II is practical because the tail builds naturally light due to its short tail moment, molded turtle deck and 1/16 sheet belly. The shorter nose also builds a little lighter, contributing to overall weight reduction and fun flying characteristics.

Being something of a WW II buff, I personally like the appearance of the nose of the Mustunt II because its shape is characteristic of several WW II fighters such as the Me109, He100, Macchi 202 and the Tony, all of which had inverted 'V' engines. This characteristic nose appearance invites a WWII military treatment to the airplane which is both nostalgic and a relief from prop-driven 'Jet Styles' Stunt ships. Also, the selection of an upright engine position seemed logical for this type of airplane. The upright engine is certainly easier for the beginner to start quickly as it considerably reduces the chance of flooding. For the expert, the upright engine facilitates easy engine handling for intensive practice flying where a stooge is used to hold and release the airplane.

To provide extra longitudinal stability to give the Mustunts groovy, easy flying characteristics, the stabilizer and elevator areas and the tail moment arm were computed to give approximately a 15% greater tail volume coefficient than my Mustang (oz6372) or Bearcat (oz5171). The elevator hinge line is placed to provide the right amount of elevator area which, together with adjustments available in the nylon elevator horn, can provide a range of turning characteristics from too slow to too fast for most Stunt flyers. Changing either the elevator area or the tail moment will bias the available sensi-tivity adjustments and may make it impossible to adjust the airplane's turn to suit individual tastes..." 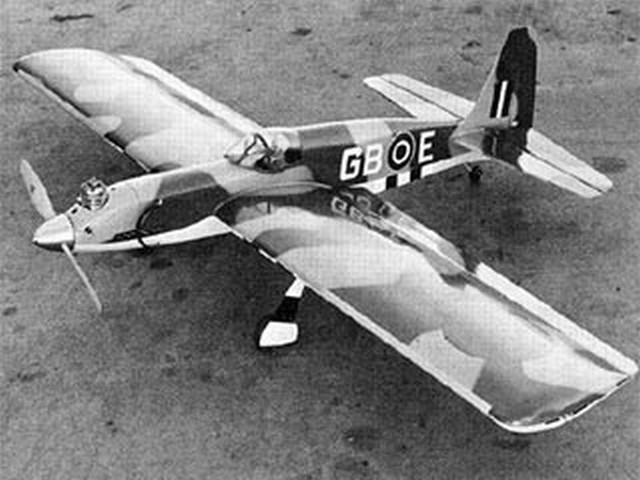 Here are a couple of photos of an old Mustunt II [more pics 006, 007]. It still flies well with a Fox .35. The cowling is lost.
EdShearer - 27/07/2017
While searching for a certain kit on the shelf, serendipity occurred. I found an old Sig Banshee box and wondered why it had not been built. Inside was a long lost club project to build the Mustunt I. I thought it gone long ago due to floods, hurricanes and a move. Around 1980 our club, the ringmastersflyingclub.com wanted to promote stunt flying among the members who were not flying stunt. Each club member manufactured one component of the plan. At the same time foam wings were becoming popular so the club cut foam wings for the model. I always knew where the wings were so once again it is all together [more pics 008].
EdShearer - 27/04/2018
Add a comment