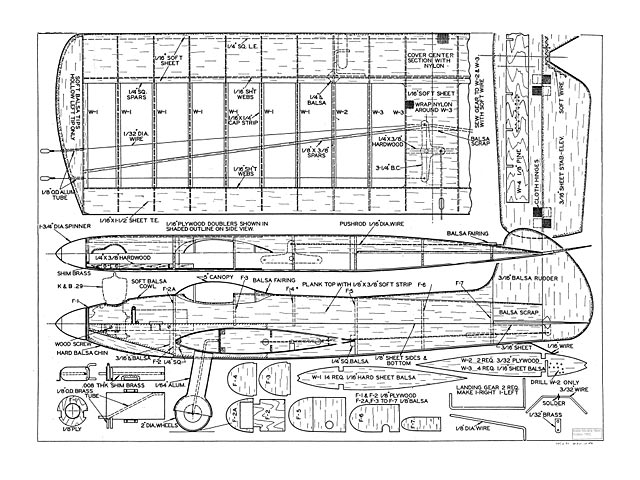 The usual reason behind the design of a new model airplane is improved performance. That was the thought we had in mind when the Gyrator was being developed on the board. During this initial stage, we tried to incorporate all the little improvements that had come to mind in the shop and to profit by the lessons learned out on the flying field. Apparently, judging from the flight tests, we found a good workable combination. This ship is stronger, faster and far more manueverable than any of our past efforts.

This design has a far higher strength to weight ratio than we thought possible - a very pleasant surprise. The original model, ready to fly, with a Fox .35 sitting up front, weighs exactly 24 ounces. Yet, structural strength is far greater than many heavier models we have built. This was accomplished by keeping the structure strong at the points of greatest flight stress and lightening wherever loads are light. Fairly careful selection of materials, using hard, heavy balsa wood only where absolutely necessary, was also a major factor in accomplishing this weight reduction.

At the end of the first test flight, it was clearly evident that the Gyrator was living up to its name. The control response was extremely fast but smooth, requiring only the lightest pressure on the handle to accomplish the desired manuever.

Recovery from a loop or wingover is fast and positive, without the vertical 'porpoising' found in some ships. This was accomplished by increasing the area of the horizontal tail surface. This is an important feature, particularly when flying into a strong wind. Frequently, these vertical oscillations get progressively worse if the pilot is unfamiliar with the ship, ending up as a Silkspan bag full of balsa scrap.

Notice the location of the bellcrank on the drawings. Now, before you go tell the modeling world that Williamson has flipped his lid, leave us explain! Locating the BC here was done for a dual purpose; to keep the ship tight on the lines through any manuever and to provide a greater looping couple. This can be seen by noticing its location with respect to the CG and the center of lift. Unfortunately, this idea is not original - all credit should go, we think, to Hank Cole who had it on one of his ships some years back. It's a swell idea, though and again contributes largely to the Gyrator's performance..." 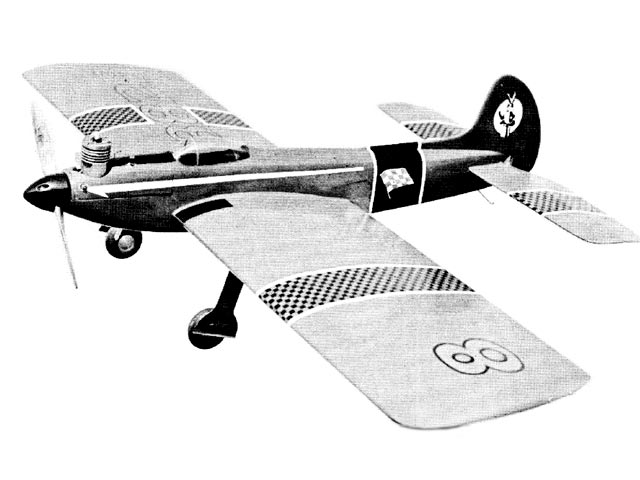