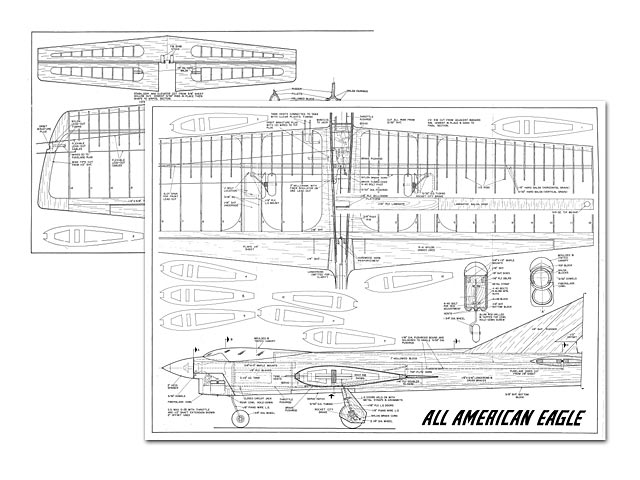 Quote: "Designed specifically for FAI, the EAGLE will carry your colors to victory in any competition. It will also win the accolades due it for beauty of design and appearance. In all ways, it is a real advance in the state-of-the-art in ukie stunt. All-American Eagle, by David Gierke.

The 'All-American Eagle' is my first attempt to design and build a truly FAI competition stunt ship with qualities enhancing the nature of the event. International competition, with all its patriotism, symbolizes the mood and sets the stage for extraordinary competitive efforts at the control-line world championships.

After extensive thinking concerning the patriotic nature of the event, the following qualities were deemed desirable:

(a) Colorful and symbolic name.
(b) Appropriate national colors.
(c) Exten-sive detailing and finish.
(d) The ability to display more complete control of the situation by being able to throttle the engine and brake for landings. (FAI limits the flight time to seven minutes as compared to our eight minute maximum.

The name, All-American Eagle, was by no means original. It was borrowed from Dan Gurney, America's leading designer/driver of world competition Formula I cars. It seems to be quite adequate for a symbolic and colorful splash across the wing.

The second condition, of course, was solved by the red, white and blue color scheme. White was chosen as the base color because of its excellent visual qualities in the air. Notice in the photographs the red and blue trim of the fuselage. The wide top red stripe is running parallel to the thrust line into the red tinted canopy. The same is true concerning the bottom stripe of blue.

This was a continued attempt to prove that fuselage trim, when kept parallel to the thrust line, greatly enhances the appearance of square corners in the stunt pattern. A specific attempt was also made to keep the top and bottom fuselage blocks parallel to the thrust line for the same reason. The depth of the fuselage was cut down from previous designs in order to give the appearance of length. This illusion of length, plus parallel top and bottom blocks, along with the above-mentioned trim, produces a pleasingly directional profile.

The actual aerodynamic configuration is very similar to my Novi (oz10253) stunt series. As I mentioned before, the emphasis has been shifted to total effect. In order to accomplish this, the reliable, contest-proven design was adhered to throughout.

Detailing was performed as closely to full size aircraft as possible. Most sheet metal lines and control surface outlines were applied with a ruling pen using water-proof black India ink. All lettering and rivet work was accomplished via 'Lettro-Set' Instant Lettering. I discovered the dots used for the rivet detail while leafing through the 'Instant Lettering' catalog, They came in six different sizes with sell for approxi-mately $2.00 per sheet. The tiny detail lettering was obtained from 'Letra-Sets' model railroad area.

Many stunt modelers today are searching for reasons why new people are not joining our ranks while other control-line events are flourishing. A great many modelers feel that it takes an excessive effort to compete with the "super specialists" with their exotically-finished and detailed Machines. As a result, in an effort to alleviate the apparent intolerable situation, the whipping boy has been our appearance point system. The critics of our event see a 'cure-all' in doing away with said forty points. The feeling persists that if all fliers start on an equal basis at the beginning of each flight, the aircraft with its many variations ceases to be a problem.

Uniquely, stunt is a combination of the pilot's ability, the fly-ability of the ship, and the general appearance of each individual aircraft. With or without ap-pearance points, judges, being human, will tend to be more magnanimous-in point allotment toward the aircraft he admires. 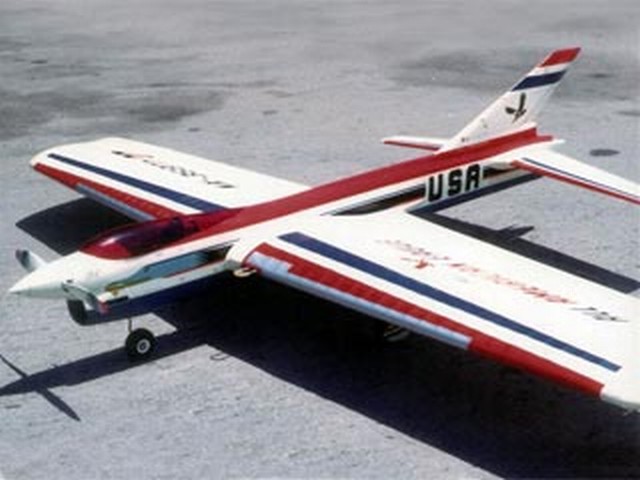 Photo of completed All Ameican Eagle model was found online at http://stunthanger.com/smf/index.php?topic=4019.0
SteveWMD - 20/03/2015
Add a comment