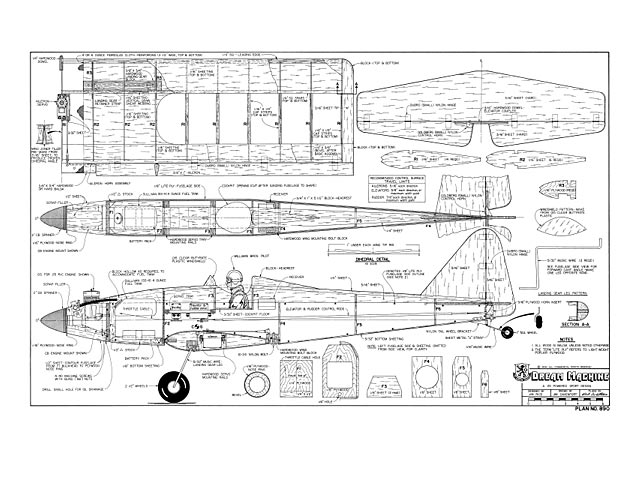 Quote: "This classy little .25 powered low wing tail dragger will give you the performance in the air that you have been looking for.
Unlike a lot of other models, the Dream Machine was not developed and refined over a period of years and numerous design changes. Several years ago while visiting our son and his family, our 6 year old grandson, Gary, asked me to build a radio controlled airplane for him. Not having time to build it while visiting, I told him I would build a plane for him when I returned home.

Since Gary had flown my RCM Trainer .40, with help from his dad, I decided to scale down this design to a size more suitable for a .25 engine. I settled on 90% the size of the RCM Trainer .40, giving a wingspan of just under 48 in. (Subsequently plans for an RCM Trainer .20 (oz7631) were published in R/C Modeler, which is almost exactly the same size as the one I scaled down.) While building the trainer for my grandson I thought the wing would make a good low wing sport plane so, using the same wing plan, the Dream Machine plans were drawn. By the time I got around to building it, O.S. had introduced the O.S. Max .25 FSR and this engine was used in the prototype - this proved to be an excellent choice.

You often read, and hear, that a new design 'flew off the drawing board'; this one did. On the first flight no adjustments of any kind were needed and the plane flew like a dream. The wide stance of the main landing gear makes ground handling excellent for a tail dragger and no problems have been encountered on the ground. The prototype suffered a near fatal accident when it was flown into a pine tree in Florida.

Construction. Wing: Like so many others, I prefer making other parts of the plane, but since the wing is necessary, let's build it first. Wing ribs are 1/16 balsa. I cut all 20 ribs the same then modify 6 ribs (R-2) to accommodate the landing gear blocks. Spars can be 1/4 in spruce or hard balsa. Leading and trailing edges are 1/4 in square medium balsa. If you are using a wing jig, follow instructions for your jig. If you are building the wing on a building board, fasten the plan sheet to the building board and protect it with waxpaper or clear plastic sheet..."

Update 10/04/2015: Replaced this plan with a clearer copy, thanks to Balsaworkbench, theshadow. 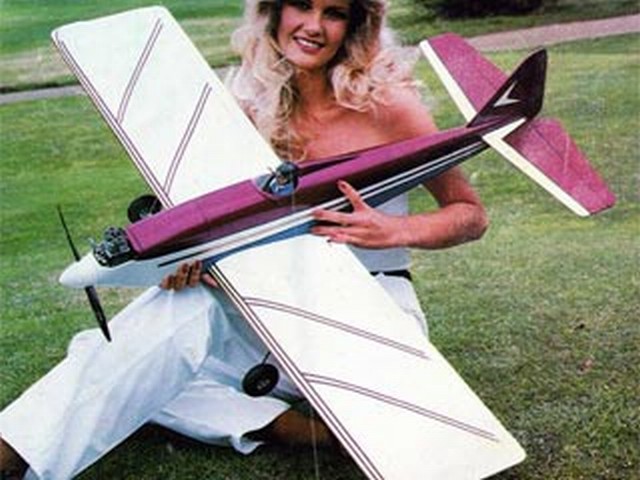