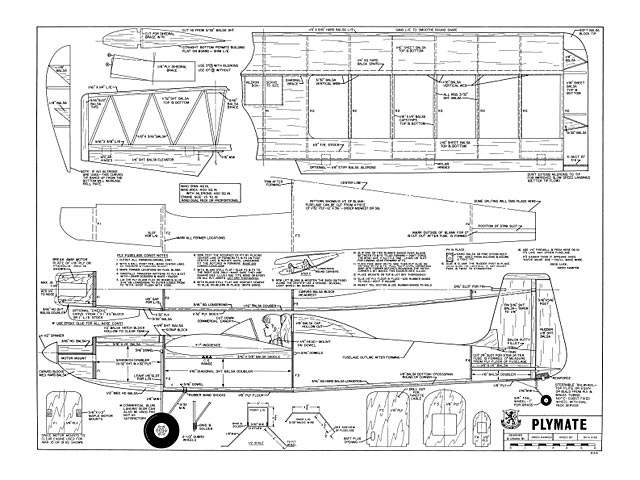 Quote: "Two previous RCM articles by this author, the Plyguy (oz8091), and Windsong (oz5944) featured the use of 1/32 in birch plywood for fuselage forming and, while both demonstrated exceedingly strong, reasonably light curved structures, the constructions were admittedly a bit difficult for one pair of hands. Here then, after over two years of development, is a new construction method guaranteed to produce results faster than anything short of a plastic almost ready to fly job.

While the approach is unorthodox, it has been used successfully on several designs, two of which are presented here. While quite different from each other in appearance, each is constructed by the same basic fuselage forming method, which with the advent of Devcon Five Minute Epoxy can be largely accomplished in a single evening. Like most 'obvious' ideas, this one took a long time coming, and, in retrospect, it is now difficult to understand why the 'obvious' wasn't obvious in the beginning.

As can be seen from the step by step photos, the method is simplicity itself, with the actual forming taking about as much time as it takes the glue to dry. No special skills or equipment are needed and the result is a sturdy, light, one piece shell which can be adapted to a variety of applications.

Sheets of 1/32 birch ply 1' by 3' or 1' by 4' are available from Midwest Products or Sig Mfg Co, and cost about sixty cents a square foot which compares very favorably with balsa at today's prices. Other advantages include quicker finishing since the ply' requires less filling and doping to achieve a high gloss finish. There is also a structual gain which is a by-product of the ply, itself, as the three crossgrained wood layers really resist splitting to a degree that must be seen to be believed. Long life with a minimum of repairs and maintenance is the net result. You fly more - fix less!

Now let's look at the Plymate and Skyraker as flying machines, for essentially the 'method' is really only a means to an end. Along the way some personal observations which have been gathering dust waiting for an appro-priate moment for voicing will be thrown in for free, not in the spirit of controversy as such, but rather to stimulate some thought through a sharing of ideas.

The 46 in Plymate is a sort of grown up Skampy (oz1919) with the general lines of a racy open cockpit sport job, de-signed to take a lot of abuse and come back for more. The prototype was flown with a good Max .15 which was excellent for general sport flying, although takeoffs were a his lengthy when the grass was long. Install a good .19 and the result is something else. There is enough wing area to take a .19 without producing a wild one which only Phil Kraft can tame, but for general sport flying the .15 is adequate.

The original was equipped with a Rand Dual Pak now manufactured by Ace R/C. This fast-rate pulse-proportional system is about as good as you can get in a single channel rig, offering full proportional controls on rudder, elevator and motor through the output of two Rand servos. In the past there was some interaction of the elevators when a motor change was signaled but this has been beautifully solved with the introduction of the new ACE Commander fast-rate trans-mitter designed by Don Dickerson. Now full elevator control is available during motor control operation thru a bit of ingenious design which permits a small amount of signal to be transmitted to the decoder when the normally full-on or full-off signal is triggered by the motor control buttons. Four adjustable trim pots, a handsome vinyl case, and an adjustable Rand Control Stick make this a really respectable piece of electronic equipment. The whole airborne package is also from Ace R/C. Note: Other receivers may cause problems, so don't mix components.

The alternate option of small pro-portional gear is obvious and permits the addition of strip ailerons. Either system will do the job and you'll find the Plymate a rugged, dependable performer. Taildragger flight is really fun after a raft of tricycles and the plane has a nice sporty look. A season of rather rough treatment and it still looks like new..." 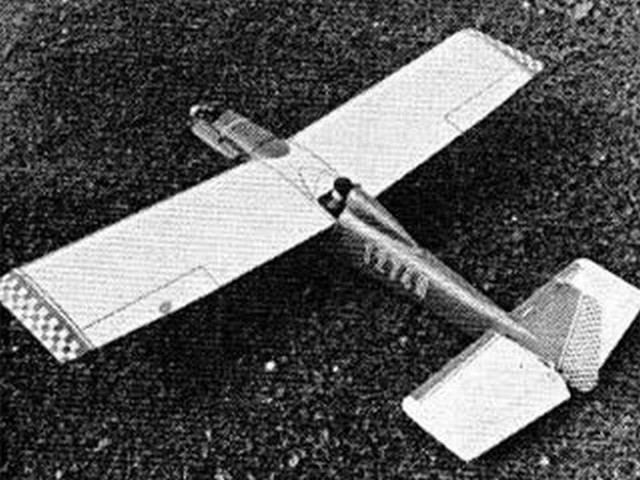