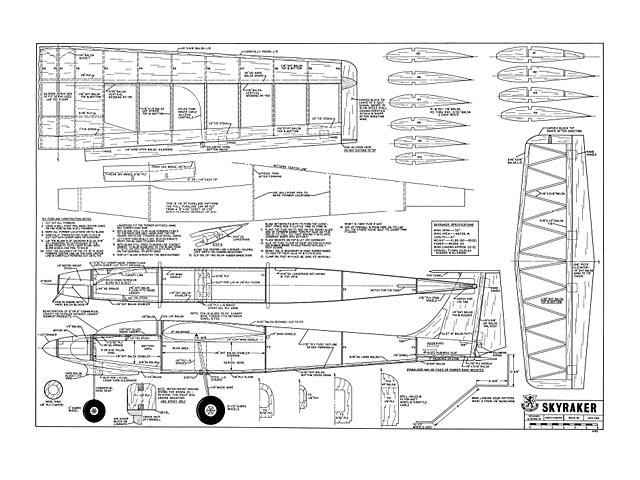 Quote: "The Skyraker design has been built and flown in .02 and .09 sizes as well as this .20 version, and all have flown as well as the distinctive appearances would indicate. In this day of power and more power, designs tend to show a sameness, and even those with less than optimum qualities will work reasonably well by packing in more punch up front. As a modeler for whom design offers the challenge, the test has been to see how much can be achieved from how little. Here is where cleanness and function find their moment of truth. So while a plane of this size might today be typically powered with engines in the .29 to .40 range, I chose a Webra .20. Whether the resulting performance proved out the design or the engine is not completely clear, for this is undoubtably the finest engine of its size I have ever owned. Power galore, beautiful throttling action and ball bearings where they count, it is truly a quality designed and manufactured engine well worth a couple of extra bucks. In any event, the combination was a natural and almost any maneuver is possible from level flight, with the exception of Vertical Eights, etc. The small nose cross section clears a 9 x 4 or 9 x 6 prop so that the whole disc puts out, and the minimum drag concept follows through by not creating large forces to be overcome.

Slow speed flying characteristics are excellent with no bad habits, rolls are rapid and, all in all, it is a very satisfactory combination. A fast building semi-symmetrical wing section was used as most sport flyers do not seem to do a great deal of inverted flying. However, if you want the whole show, go full symmetrical. As a matter of fact, some of you will probably go the large engine route and blow the whole premise anyway, but that is the great attraction of the sport, for you can tailor it to your own desires.

Incidentally, many flights were made using three servos and coupled rudder-aileron controls. With the exception of some wing dipping on takeoff, flight performance was almost indistinguishable from full house. As to survivability, a broken wire (I think) resulted in a vertical spiral dive from an altitude in excess of 100 feet. The long walk to pick up the pieces was filled with mental pictures - all bad, so upon reaching the remains I was somewhat stunned to find it sit-ting upright and intact, with only some spreading of the fuselage at the main landing gear due to a bad glue joint. 'Nuff said!

Since this piece has begun to ramble around like my first takeoffs, let's touch on another related matter. There are quite a few designs offered today as the answer to everyones' every wish ie the all purpose-rudder only, galloping ghost, proportional beginners' ship capable of doing the complete FAI and AMA patterns simultaneously. Perhaps a few can really accomplish most of these things, but a basic aerodynamic fact of life cannot be avoided. No one design can do all of these things well. This is true because each mode of control has specific problems best solved in specific ways. The Plymate (oz6429) is a case in point. As originally designed for the Rand system, ailerons were not included and ten degrees of dihedral were used to help the roll rate since the yawing action of the rudder would have to do all the work..." 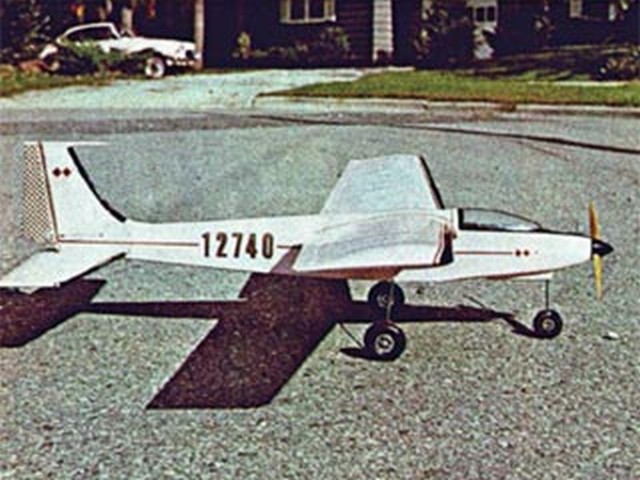