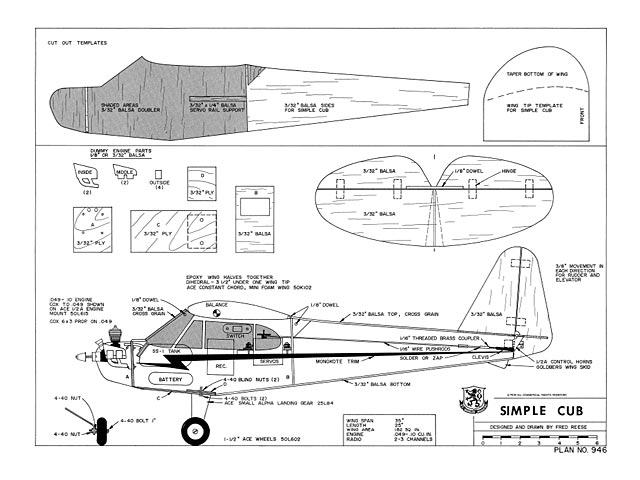 Quote: "The Simple Cub is the second in the Simple Series designs by Fred Reese featuring minimum construction and maximum performance schoolyard scale.

Next to P-51s, more models of Piper Cubs have been built than any other single aircraft. In fact, this is my sixth R/C Cub. There is just something special about a Cub. The Simple Cub is the second in a series of simple designs that I built last year. The Simple Citabria (oz7278) was the first. The Simple Series airplanes are designed to be the easiest possible construction that will produce an attractive, inexpensive, high performance schoolyard flier.

Basic construction can be completed in an evening. The wing is the popular Ace constant chord mini foam wing, and power can be anything from .049 to .10 cu. in. but a TD .049 is recommended. The larger engines actually fly the airplane slower, but give better vertical performance. The Simple Cub is quite fast and is very acrobatic, not a beginner's airplane, just simple. The Simple Cub has generous dihedral and a large rudder for good roll response. Ailerons are not needed to do consecutive rolls or even fly inverted.

The Simple Cub will take off from a hard surface easily if you give it a little shove to get it moving in a straight line. Once there is air moving around the rudder, the Cub will track straight with little or no correction required. The glide is fast when the engine quits and I usually don't try to slow it down until the Cub is on final approach and low, then just hold it off until it settles in on its own. 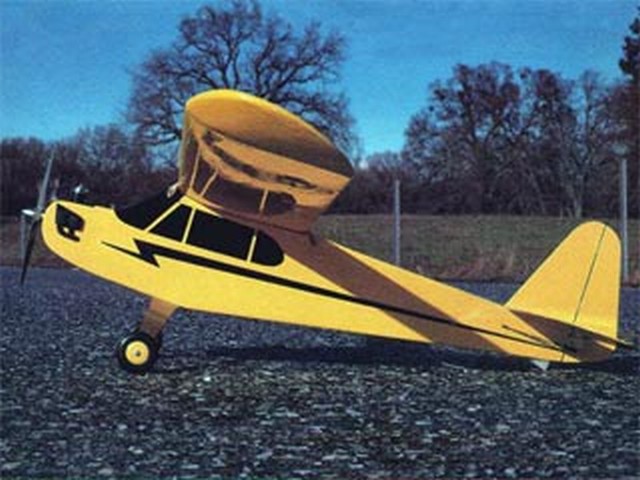