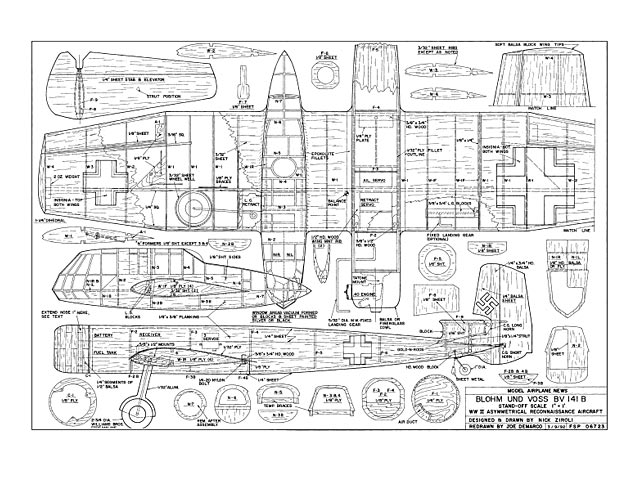 Quote: "Aircraft modeling's most creative, also innovative designer has, as usual, come up with a subject that will stir plenty of modelers to build it! Blohm und Voss BV-141-B, by Nick Ziroli.

Early in 1937, a specification was issued for the design of a short range reconnaissance aircraft that could also be used for light bombing and ground attack. Among the requirements was the desire for a single engine aircraft with the same field of fire and vision as a twin engine aircraft. Dr Richard Vogt of Blohm und Voss decided that this would call for new and truly unorthodox approach. Thus the asymmetrical BV-141 series was born.

The first one flew in 1938 with Major General Ernest Udet at the controls. It proved to be quite successful, so much so that an order was placed for three planes including the original, since that one was built with private funds. The original BV-141-V and A models had a conventional stabilizer.

For one reason or another, large production contracts were never awarded. One of the main reasons, it seems, was the success of the FW-189 'Owl' which fulfilled the same role with engines that were not in such demand as those of the BV-141. A total of about 12 various models of the BV-141's were built. Five BV-141's were made and saw limited service on the Eastern front, the last delivered in 1943.

The final BV-141-B is the version that I chose as a model because there seemed to be more information available on it, especially since fellow modeler and club member (Long Island Radio Control Society) Carlo Masullo came up with a large set of plans for an old rubber-powered BV-141-B. He knew I was interested in building a model of it, and this is what got the project going. Also Airfix has a 1/72nd plastic model that is a help for details.

The 'B' version was desired because it has the offset stabilizer that the others did not have. This was a 'must' to make it as unorthodox as possible. The model was scaled approximately 1 in to 1 ft. This gives a wing span of 54 in and area of 540 sq in, a size that I figured would be about right for the new Testor's .40 we would be testing. Also to be flight-tested were a pair of Carl Goldberg retract gears actuated by a World Engine's S5-R 180° retract servo. The new Heathkit miniature GDA-19-41 and sub-miniature GDA-19-42 servos were used along with GD-19 control system. These will be covered in more detail later.

Then there is the question 'why?' Why put all that work into a model that might not get off the ground, or, if it does, would chase its tail around uncontrollably as was predicted by some people. The simple answer is 'just to be different.' I enjoy flying a one-of-a-kind model, especially something as strange as this, that looks as though it won't fly. The fact is, if I didn't think a plane would fly I wouldn't build it . . . after a long careful look at a three view drawing, I felt sure that the asymmetrical plan form would perform satisfactorily.

Basically, I looked at it like this: the engine mounted off to the left and the drag of the crew nacelle will pull the plane to the right; engine torque and fuselage-stabilizer drag will pull the plane left. The center of the wing is about 1/2' away from the fuselage. With this in mind, it was decided that the drag of the nacelle versus the fuselage drag just about cancelled each other out. However, it was felt that torque would not quite balance out the off-center engine, so a little left thrust was put in, about one of two degrees. Weight must be added to the right wing tip so it balances in the center. My only concern was for the offset elevator. Would it have a great turning tendency when used to any large degree? The answer proved there to be very little.

The first flight was proceeded by some fast taxi tests to find out how it tracked on the ground. There was a slight tendency to turn to the right when accelerating fast. Yet in the air a little left trim was required. This, when I thought about it, led me to believe that I was probably instinctively holding a little right while advancing the throttle as is normally required with a tail dragger. In the air, performance is about the same as any conventional plane just Sport flying. However, rolling maneuvers are not all that could be desired. It will roll, but not a smooth axial type since it does not truly rotate around the fuselage.

So far, only a few flights have been made, eight to be exact. This has been enough to prove the operation of the test articles but only many flights under good and bad conditions can tell how they will stand up in every day use.

First, let's take a look at the engine, the new Testor's McCoy 40 R/ C. Actually I don't know whether to call it a Testor's .40 or a McCoy .40. Whatever it's called, it's the series 21 and you can't mistake its appearance. The finned crankcase gives it a distinctive look all its own. However, an engine can't be . rated on looks alone, performance is what counts.

It features a Dykes-type pressure actuated ring and a Perry carburetor. An idle bar plug is included. Not to go unmentioned is the most complete and explicit 14-page instruction book I have ever seen included with an engine, covering everything a beginner would have to know to successfully operate the engine even if he had never seen or heard one run. There is even a cross-torquing diagram for tightening the head screws. I did find one fault with the instructions - that was the needle valve setting for starting the engine. They call for one turn open; I found about three turns necessary. This is a very small discrepancy that would be overlooked by the average modeler, but could cause a rank beginner failure in starting the engine. Possibly this applied only to the engine I obtained. Also included is a die-cut cardboard engine mounting template for laying out mounting holes.

The engine was taken from the box, mounted in the plane, taken to the field and flown. It started easily, though heavy priming was required, probably due to the cold weather. The needle valve adjusts easily and the idle was perfect right out of the box. I used an 11x4 Top Flite prop, a little less pitch than normal but I wanted to keep the model in low gear for the test flights. Later flights were made with a three-bladed 10x6 Tornado prop. This performed very well..." 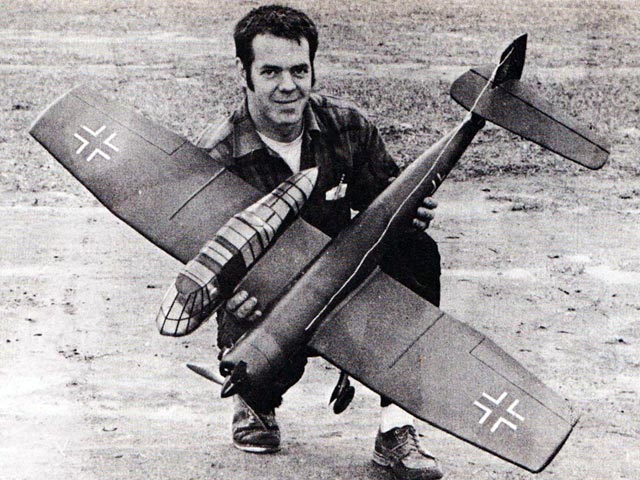