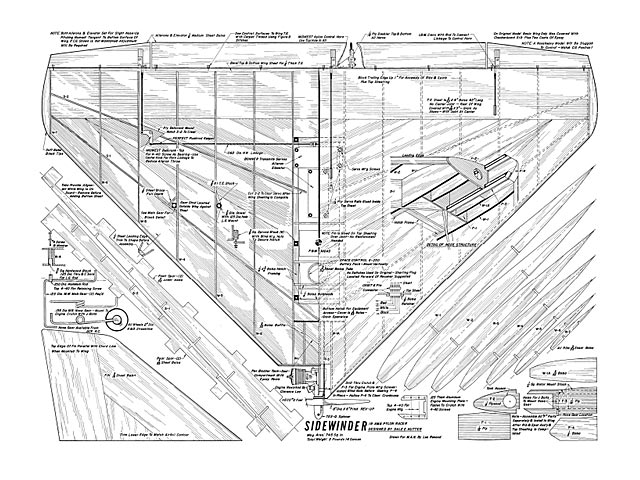 Quote: "Speed and Simplicity Are the Secrets for This Pylon Record Breaker - designer Feels That if the Magic Minute is to be Broken, the Sidewinder Will be the One Pylon Racer to do it. Sidewinder by Dale Nutter.

The inherent simplicity of the delta design has attracted the interest of radio-controlled model designers for many years. The Delta 707 (oz1640), Suds, Hustler (oz2873), Talon Zephyr (oz10579), have all evolved as practical models and have flown with varying degrees of success. The Hustler, available in kit form, enjoys a great deal of popularity today and the fundamental reason for its success lies in its basic design simplicity.

Under the present AMA rules, the Talon Zephyr (oz10579) is the only pylon delta published, designed to utilize the minimum AMA size requirements. Built for .15 engines, the Taylon Zephyr must carry identical weight equipment as the larger .19 ships.

The Sidewinder planform was intended to conform with minimum area requirements of .19 engines size. Since equipment weight is the same, a .19 pylon delta wing loading should be less than that one of a comparable .15 design. In addition, the airfoil used on most present-day deltas has excessive reflex, particularly when weight is kept at a minimum. Excessive reflex is indicated when the control surfaces has to be set below the normal airfoil contour.

An independent search for an airfoil with suitable characteristics was made by Jerry Krause. He located the M-6 airfoil which has a positive pitching moment without actually being reflexed. This characteristic is achieved by locating the maximum thickness for the bottom half of the airfoil at 50% chord; while the maximum thickness for the upper half is at 30% chord. Lift and drag characteristics for the M-6 are suitable for deltas. An 8% thick airfoil was selected to provide adequate thick-ness for equipment installation.

The side mounted engine is used for two basic reasons. First, the greatest moment of inertia (relative stiffness) of a delta is in the direction of the wingspan, and therefore, less vibration effect is to be expected of the principal axis of engine vibration (in the direction of piston travel) if aligned with the delta span. Some speed experts claim that rigid engine mounting will increase engine rpm's.

Secondly, when reed type equipment is used, it is necessary that the direction of reed movement be oriented perpendicular to the principal axis of vibration. The use of a side mounted engine permits the receiver to be flat-mounted in the wing.

The engine is located in the Sidewinder so no trim change is required for the transition from powered to gliding flight. To achieve this result, it is necessary that the engine be carefully aligned with zero degrees side thrust and down thrust. The landing gear should be set so that the model will rest at an angle of attack of zero degrees..."

Quote: "Another delta RC pylon racer from the era when these were all the rage. Dale Nutter, MAN June 1964." 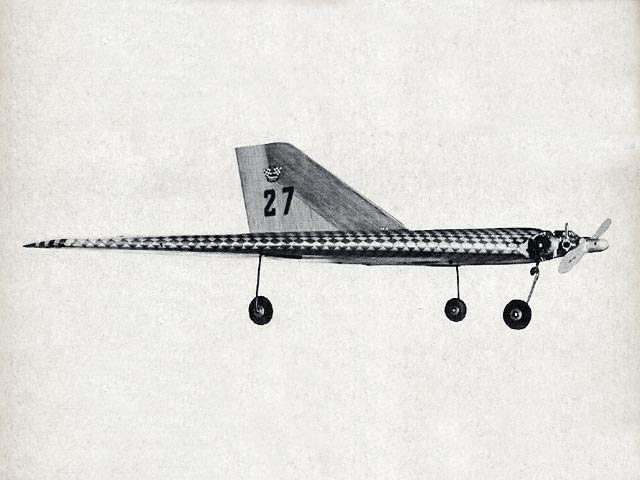