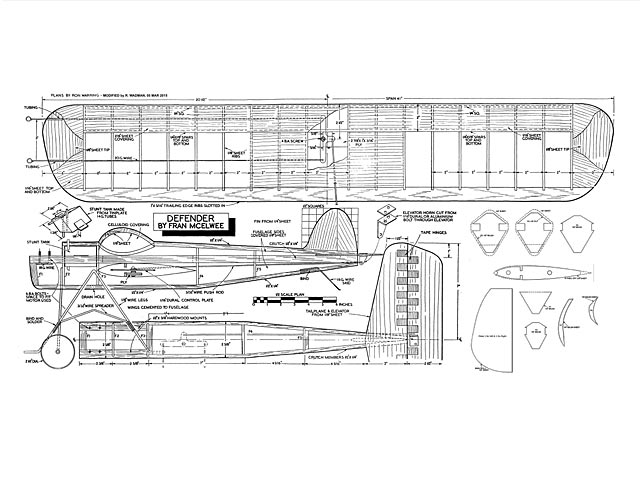 Quote: "THE Defender is an easy-to-build, easy-to-fly stunt controliner, which has collected a good share of American trophies when flown by the writer. In the 1947 season, the original model took seven firsts - all in top line contests. These included the Mirror Flying Fair, Levy's Flying Carnival, Philadelphia's Flying Circus, Penn State Championship and the Jersey City Airwheels meet.

The Defender has been designed around the Drone diesel - the two making a fine combination. Normal weight is 28 ounces, but models have been built as light as 22 ounces. Naturally, the lighter you can build without sacrificing strength, the better from the point of view of stunting.

To start construction, the crutch is the only part that need be drawn up. Glue the motor mounts to the crutch wood first and then assemble the crutch to the dimensions shown. While this is drying, cut out the engine former from 3/16 ply and the remaining formers from 1/8 sheet balsa. Bend the undercarriage from 1/8 diameter wire and bolt to the engine former. Use solid rubber wheels - not airwheels - to prevent bounding.

Cut out the fuel tank pattern from a tin can or thin brass sheet. Well solder all the joints and test for leaks before glueing into the fuselage. Mount the engine and solder the nuts under the mounts to facilitate the easy removal of the powerplant.

Cut the tailplane and elevator from hard 1/8 sheet, using metal or tape hinges as you prefer. Make the elevator horn from 1/16 aluminium sheet, and bolt in position. Now cement the tailplane to the top of the crutch, followed by the 1/4 in sheet fin..." 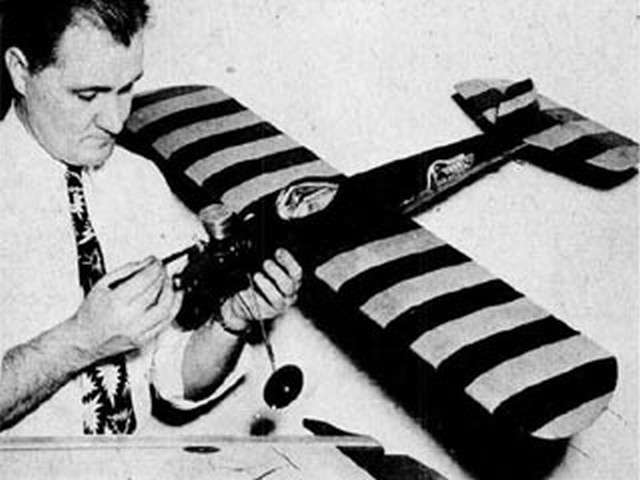 Around 30 years ago I built the little 50% Defender in the photo [more pics 003] directly from the half size plan in the Model Aviation Planbook. In the photo it is fitted with a gold head "special edition" Performance Kits Dart, which was rubbish! Subsequently re-equipped with a genuine Albon Dart it proved to be a good little flyer and was eventually given away to a young relative when I moved to France.
Sundancer - 29/03/2016
Add a comment