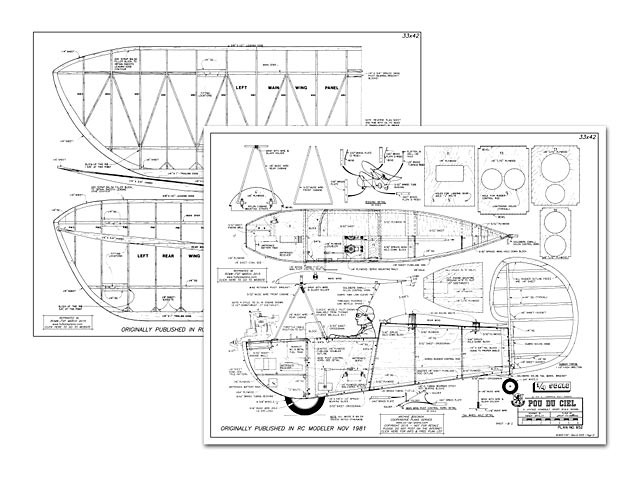 Quote: "I've always felt the Pou had possibilities as an R/C model. The aircraft had more character and personality than the law now allows! Since Henri's goal was simplicity, the model had to be easy to build too. First I located a set of plans for a 1in Scale Pou drawn by Ken Hamilton back in the 1930's. This British version had a 22' wingspan and a 30 horse Ford automobile engine for power. G-ADMH had a cowl around the engine making the model's nose much easier to build. I was most fortunate to run into Mr. Hamilton at a free-flight scale contest shortly after I obtained his plans. I picked his brain for ideas and he proved most helpful. I'm not ashamed to admit, my Pou is scaled from his great drawings! Thanks, Ken! Next I contacted Bill Hannan, regarding color information and anything else that would be helpful. Now I was armed with as much information as possible, so on to the building board.

The first Pou was built in three days. I didn't want to waste too much time, just in case. Tipping the scales at 33 oz, this 2inch scale Pou was first powered with a Fox .15. The first flight was like that of an Atlas missile, in slow motion! The Pou stood on her stubby tail and climbed at about a 45 degree angle. Instinct told me to chop the throttle, so I did. That wonderful, reliable old Fox promptly quit cold, and I discovered another problem. Seems I had about 1/2 in too much positive incidence in the main wing! I chose to stay with the pivoting wing for pitch control and was now holding full down an the transmitter stick. My Pou just weather-vaned and flew backwards, bobbing up and down but never stalling. The landing was uneventful, taking place about 20 ft behind the launch point. The .15 was quickly replaced with an Enya .09!

Experimenting with the angle of the main wing taught me I could live with too much positive, but a Pou won't stand for too much negative. With very little effort really, I had this hug flying so well I was sorry I didn't take more time building it. I feel a modified airfoil, more reflex in the rear wing, and a more forward Center of Gravity solved the design problem from a model standpoint. At least that's what worked for me. Yes, a Pou will still tuck, but it takes real effort. If you hold down-wing long enough it will go down. Unlike its full size counterpart, however, yours will recover if you apply up! Once you get used to flying it, you will find out, just like Henri did, it's not necessary to put the nose down.

Since Quarter Scale models are the rage, I enlarged the Pou to that size. Believe me, it flies just as well, if not better. So build it light, don't over-power it and, for gosh sakes, get the incidence angles right! If you follow those guidelines, yours will fly as good as mine does, so let's build one.

Construction. Fuselage: Begin by cutting two identical sides. Select lumber that is flexible, but not so soft as to dent easily. Mark the former locations with a felt tip pen to prevent scoring across the grain. The 1/16 plywood doublers are installed..." 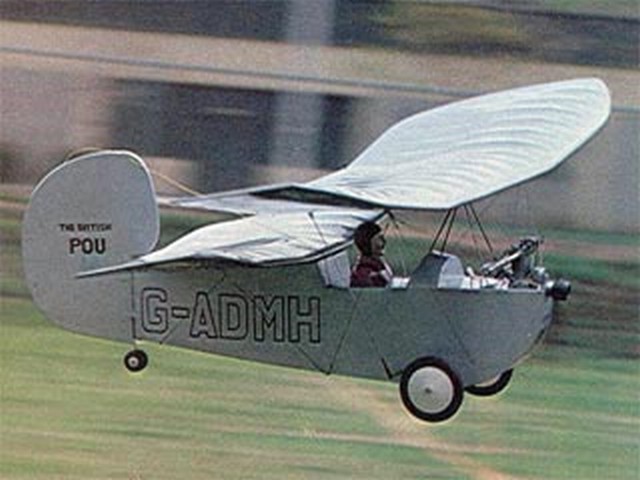 Here are several pictures of a Randy Wrisley 1/4 scale Le Pou Du Ciel [more pics 004-007]. More commonly know as a Flying Flea. Power was a geared brushed 540 electric motor. This was in the late '90s. Long before brushless. The Flea was one of the easiest flying planes I have ever built. Basically rudder and throttle was all that was needed. Covering was Hobby Lobby Ora Fabric. Must have had over 300 flights on the Flea before I sold it. One of my all time favorites.
BobSealy_Tennessee - 12/02/2018
Add a comment