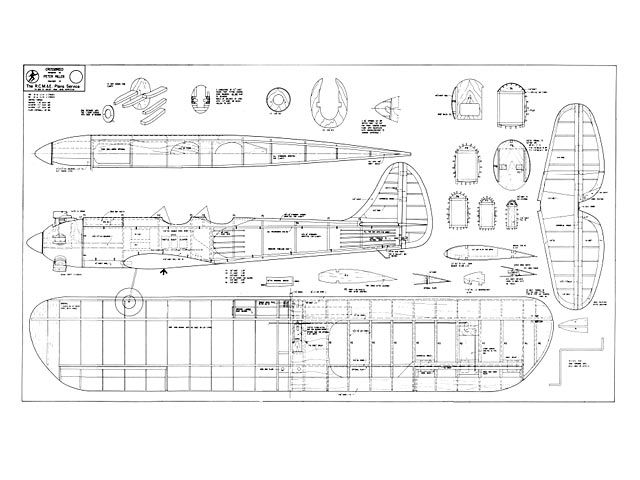 Quote: "55 inch span sports model for 0.40 cu in four-strokes captures the atmosphere of pre-war US trainers to a tee! For 4 or 5 function R/C. Pee-Tee Sposter, by Peter Miller.

THE DESIGN OF THE 'Pee-Tee' was brought about by one of the moods that all scale designers know; you want to design a scale model, you know just what you want but hours spent with 3-view drawings, a ruler and a calculator leave you feeling even more frustrated because nothing seems to be just what you want. The only cure for this mood is to build something ...anything. The Ryan PT-22 had come nearest to my requirements but at the size needed, only the rocker boxes of my Saito 45 stuck through the cowling so in desperation I designed the 'Pee-Tee' based on the Ryan but with bits of other aircraft thrown in - if someone had not had a plan published with the name Mongrel (oz8641), I would have used that name.

Construction was based on my control-line 'Yak 18' (APS plan) of proven lightness and strength, it looks complicated but is really very easy, light and cheap. A 0.30 cu in two-stroke or 0.40 cu in four-stroke motor will give a performance that will match the type of model, a 0.40 two-stroke could be used for added performance in which case a single cockpit with a bigger pilot and a fighter or racer colour scheme which would be in keeping with the 30s character of the model. The wing has been designed so that flaps can be fitted with only minor modifications to the design.

Construction is simple, I kid you not. At first glance the model may seem quite complex but it isn't, I am very lazy when it comes to building and refuse to design anything with tricky or awkward areas of construction. The plan shows all the required information so the notes that follow will not go into detail but will just discuss some of the main points of interest.

Fuselage. The two sides are built over the plan, the sides could be all sheet if required for use with a four-stroke due to the extra weight of the engine but they are adequately strong as shown, the basic box has side formers at the nose with a double skin, this gives terrific strength and simplifies construction of the oval section.

The side stringers are stuck down before the side sheeting is fitted, after fitting the sheet, the stringers are sanded to match and also tapered to nothing at the rear. The rear bay of the fuselage is sheeted to take the stringers and to act as a weight box. Top and bottom stringers are fitted in the same way. The tank hatch is optional but well worth the slight extra work involved, some law states that an accessible tank will give no trouble while a tank that is built in will always have some problem.

The cowling is made from laminations 1/2 in sheet balsa with four Veron 'Hawker Tomtit' cylinders fitted, it is retained with two screws through the front ply ring into the ends of the bearers. A cut down spinner of the type which is held together with two screws, is fitted. The rear portion is cut off and new cut-outs for the propeller blades Made in the front part, the rear part now acts as a back-plate. This shape is much more in keeping with the era, this method of making the spinner is Gordon Whitehead's (Thanks, Gordon). A normal spinner can be used of course... "

Note: It seems the Crossbreed was renamed the Pee-Tee after its original publication. So the title on the plan illustrated in the magazine pages was "Crossbreed" but the article and all other text (and all later reprints of the plan) used "Pee-Tee Sportster".

Update 11/03/2019: Replaced this plan with an alternate scan, thanks to Circlip. This one does not feature a title block, and so is less confusing. 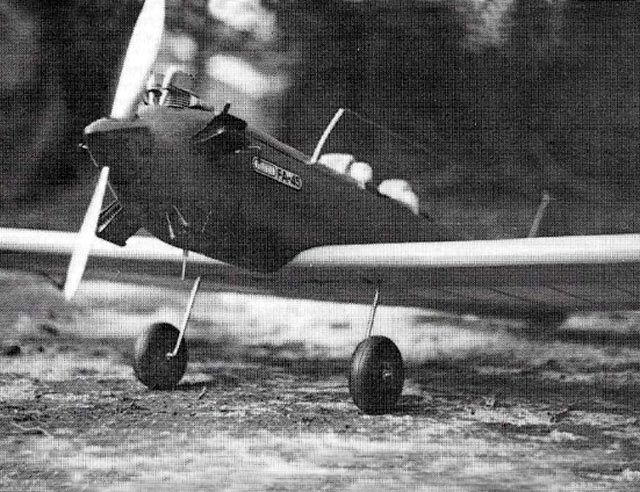 Hi Steve, The Crossbreed looks a lot like the Ryan ST3-KR that Harrison Ford crashed last week... Regards,
Marc - 16/03/2015
Crossbreed. This plan was published in RCME July 1984 but called Pee-Tee Sportster. The small plan in RCME actually shows Crossbreed but all the rest of the article says Pee-Tee, so it's obviously the same. The CG arrow looks way too far back and someone who built one said in a forum he used 25 percent for CG which proved correct. Regards,
kc - 22/06/2015
I am changing the title of this listing oz6405 from 'Crossbreed' to 'Pee-Tee Sportster'. Also changing the download filenames from Crossbreed to Pee-Tee Sportster. The previous title of Cossbreed was, I think, unhelpful and misleading.
SteveWMD - 11/03/2019
Add a comment