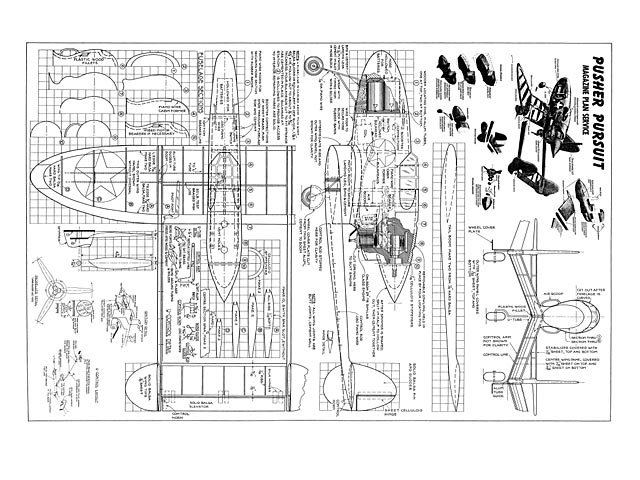 THIS model, although of unusual arrangement, is excellent for the beginning tether flier. Being a pusher, it goes a long way toward preserving engines and propellers. Its tricycle landing gear makes high-speed taxiing quite safe, thus simplifying test flying. The detachable nose section is designed to snap off in the event of severe impact. Since the nose section houses the batteries, the most concentrated portion of the plane's weight, most of the energy of impact is absorbed when it is dislodged. The control system is simplified and entirely external. The U-tube carries the entire control-line load and, since it is stationary, it is very simple to mount securely. This system also allows long levers on the rest of the control system, which minimizes the effect of lost motion and friction.

The cockpit and engine nacelles are carved from two blocks of soft balsa temporarily joined with dowel pins; this is the fastest and easiest method of construction. If two blocks of the correct thickness are available, join them with the pins to form a split line down the center of the nacelle. If only one block of the total thickness is used, saw it down the center and join the halves with the smooth faces together to form a straight split line. If you have a jig or band saw, lay out the top and side views on their faces and saw them out. Replace the scrap after cutting one face to keep the block square in cutting the other. Without a jig or band saw, it is best to separate the blocks, lay out the side view on the split-line faces and cut out the profile on each block sepa-rately with a knife. This will make the profile correct at the split line, upon which the accuracy of the balance of the carving depends. The plan form will automatically take shape as the block is cut to conform with the templates.

Separate the halves and hollow them to about 1/8 to 3/16 in thickness. The after end, which houses the engine, should be slightly thicker for strength. The nose section is cut off and hollowed only enough to form a battery box. While the halves are still separated..." 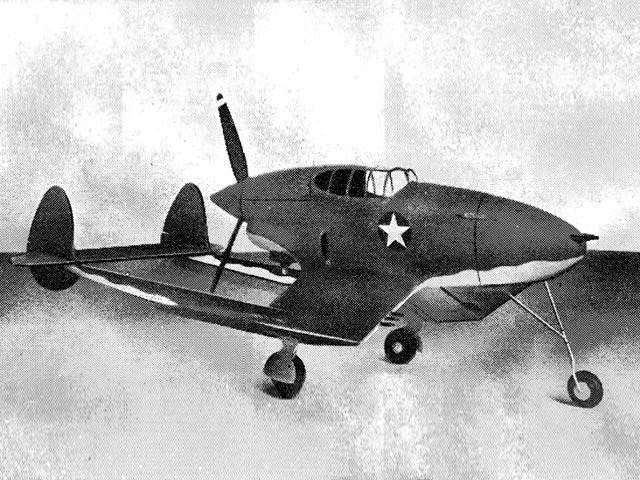