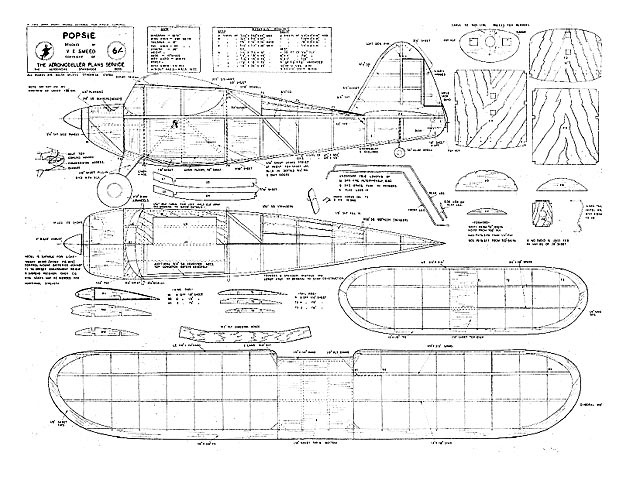 Quote: "The stubbiness of this little model is the result of an attempt to produce the smallest practicable model suitable for normal light-weight radio control, allowing as much radio space as possible. The prototype has not as yet flown under radio, having been used as a sport job, but it has been ballasted and subjected to every extreme of trim, etc and has proved entirely satisfactory.

The underlying idea behind every part of the design has been the ultimate installation of a set, and all the known desirable features for successful R/C models have been incorporated as far as possible. The following design points may be of interest to any builder who contemplates fitting this model with a radio outfit:

A fourteen-ounce wing loading was considered the highest desirable for a small job; allowing 15oz for the airframe and 7-1/2oz for radio, this gives a wing area of approximately 1.6 sq ft. The use of a fairly low aspect ratio enables a compact and sturdy wing of 38-1/2 in span to be employed. Because of the resulting large chord and the desirability of using a short moment arm for overall compactness and manoeuvrability, a 37 per cent lifting tailplane is advisable and is therefore utilised.

The fuselage is laid out to give ample cabin room and accessibility with adequate strength, and is of sufficient width beneath the leading edge of the tailplane to permit the easy mounting of an escapement. This width also ensures a firm tailplane seating. The C.L.A. is low and sidemounting the motor enables a high thrust line to be employed as vell as cleaning up the nose entry. The undercarriage is designed to absorb a vast amount of punishment and also to give trouble-free ROG.

It is not necessary to hold the model off the ground for starting - an advantage, since the width of the fuselage makes a firn grip difficult. In fact, initial power-glides on inadequate power resulted in Popsie landing in quite long grass with the motor continuing to run.

The rigging angles and sections used give similar climb and glide characteristics and speeds, and the rudder should be about equally effective in power on and off as under power, the wide body produces a blanketing effect on the slipstream. This blanketing gave a little trouble on early flight tests with 7 in. airscrews, but this was overcome by using a slightly larger prop.

A Mills .75 cc was used for sport flying with the prototype and it is recommended that an ED. Bee is used for radio work. Fully detailed building instructions are supplied with the plan..."

Note this is a very low res plan.

Update 30/09/2016: Have resized this plan to full size at 39.5in wingspan, thanks to Chris. It is still a very low res plan, and in greyscale too. Would be nice to replace this at some point with a better scan, if anyone out there has this one? Thanks.

Article, thanks to S&T#94.
Alternate plan. This is a modern redrawn plan in PDFvector format, by hogal. 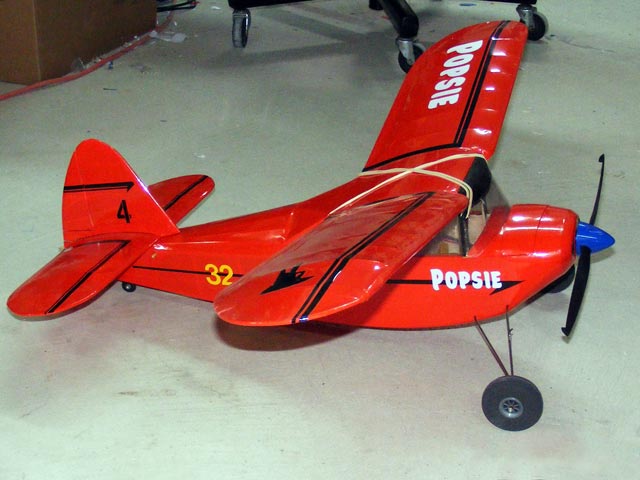