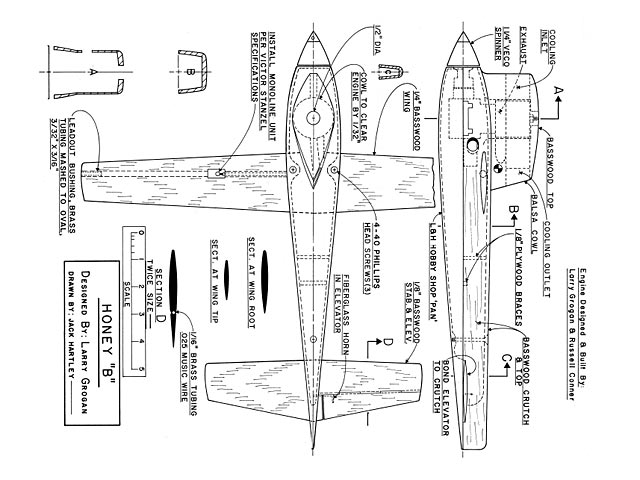 Quote: "Another champion design by one of the most consistent speed winners in hot line circles. '61 class B Nationals Speed Winner it has won or placed in every contest entered in '61 speed season. Honey B, by Larry Grogan.

The Honey B was designed in the spring of 1961 for a homebuilt engine that was in process at the time. Design target was a strong and easily constructed model that would really stay in the groove permitting the engine to run at its peak rpm. Both engine and model took two months to complete but it was a nice looking model and figured to really go.

On the day before the Longview Championships at Longview, Texas, we flew the Honey B, it came right out of the dolly real smooth and it flew better than expected. After the clocking we all looked at the stop watch with amazement, it read 11.3 which was 159.23. I was really happy about the flight, but I looked at the engine after the flight and it had sheared the rotor-pin off in the back plate, so I had to build up a new rotor the night before the contest.

On the contest day, during the first flight, it blew out the glow plug element and the piston and sleeve burned. However, it was good for four real fast laps and three dead lean laps and still turned 146.05, good enough for a 3rd place tie in open B speed.

The next contest was the Houston, Texas Internationals and on the first two flights it didn't get a good needle valve setting, but on the last flight it was better and it turned 153.61, which was enough for first place in Open class B speed.

Next contest was the National Model Airplane Championships in Willow Grove, Penna, and I wasn't sure how it would do in a different climate, but the engine settled in real nice. On the first flight it turned 150.19 which was first place at the time. On the second flight, too large of a prop was used and it only turned 146.88. We put the Honey B up and waited to see if it would be necessary to fly again. As the time didn't stand up, we had to fly the third attempt and it turned 152.35 which was good enough for first place. Unfortunately after the clocking the engine leaned through and burned the piston sleeve. We weren't aware of it at the time and at Wichita Falls, Texas, it only turned 130.19 because of the cracked piston. However it still won third place.

The next contest was the Southwestern Championships at Dallas, Texas, it turned the best speed ever: 155.92, one hundred of a second off the AMA record, in a 35 mph wind. That was the last flight to date and if you are a speed modeler or just a beginner in Speed, the Honev B is a real fine flying machine, strong and easy. '

Construction would be perfect for a beginner. I hope you will have as much luck with the Honey B as I have and many days of happy and smooth flying.

Construction. Wing: Use 1/4 x 3 x 18 inch basswood and draw the wing pattern. After sawing the wing, draw the wing taper 1/4 in at the root and 3/16 in at the tip - then use plane, after marking the high point of the airfoil in the wing, to rough the wing shape..." 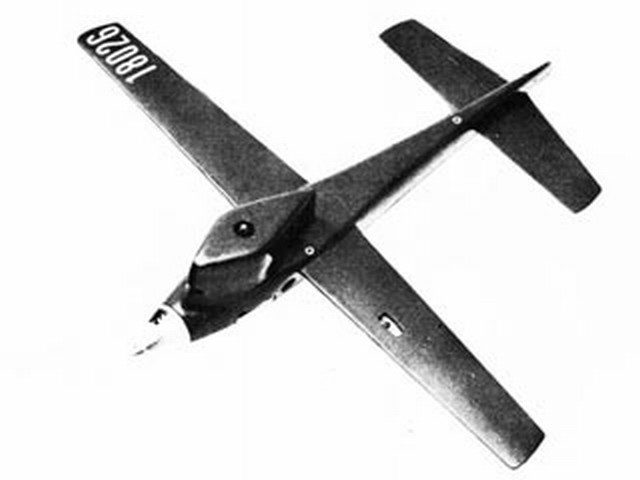