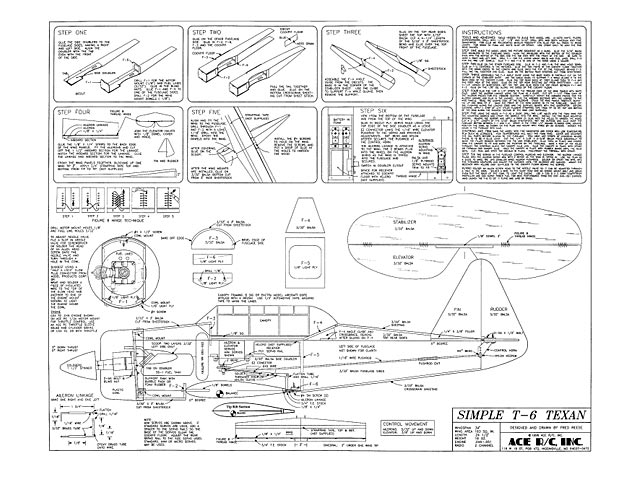 With the AME Big Mig .061, this sport scale tyro yields potent performance on two or three channels. Also designed for a simple 1/2A racing event.

Simple AT-6 Texan at a glance:

Racing quarter-scale and larger airplanes has drawn a lot of publicity from the model press because it looks so majestic. Formula I racing has been around for a long time and the speed of the airplanes and the close competition is exhilarating. The only drawback to these activities is the fact that both are expensive for the average modeler. Even Quickie 500 racing, which started as the poor man's answer to racing, has 'degenerated' to expensive custom made and tuned engines.

To bring the fun of racing, without the expense of three thousand dollar airplanes and five hundred dollar engines, Ace has suggested an event for their Simple Series airplanes that should be just as competitive and cost well under a hundred dollars for a competitive airplane.

The AT-6 is an addition to the line that includes a P-51 and Me 109, and brings to three the airplanes that are included in the proposed rules, a copy of which are included with the kit. None of these airplanes have a landing gear so throttle control is not necessary. This makes two-channel, elevator and aileron radio systems possible and even desirable. Among other rules, engines are limited to the .049 to .051 range with a suggested retail price of less than $60. The Simple Series AT-6 builds into a very realistic looking airplane with only a minimum of effort on the part of the builder.

The kit: Like most Ace kits, all parts that are subject to damage are individually wrapped. These include the cowl, canopy and Ace's famous foam wings. The kit includes die-cut balsa and plywood parts and a complete hardware package. The die-cutting is of average quality requiring some sanding to clean up, the edges. All of the parts fit, with the exception of the notch in the fuselage doublers for the aft plywood wing mount. As die-cut, it misses the plan, and the wing, by about a quarter of an inch. Check the plan and make this correction before gluing the doublers in place on the fuselage sides.

Following the instructions, after gluing the doublers to each fuselage side, the firewall is drilled and, along with the aft cabin former, is cemented to one fuselage side using right triangles to assure that both are vertical to the side. When the glue has set, the other side is glued over the first. Since the engine is mounted on its side and because I intended to use an 'illegal-for-racing' Big Mig .061 which includes a muffler, it was necessary to provide a blast tunnel for the exhaust. This was started by cutting a three-quarter inch half circle, that matched the muffler, in the bottom right side of the firewall before it was mounted (the AME .049 as well as the Cox .05 have mufflers and need the same modification.) A V-shaped cut in the right fuselage side extending back two and a half inches matched the edges of the half circle cutout in the firewall. A piece of 1/16-inch sheet balsa was dampened with water, formed into a cone and glued into the fuselage cutout. Since the AT-6 was designed for the TD .049 - .051 series of engines, this modification would not be needed if one of those engines is used.

The firewall is marked for the Ace 1/2A mount and all of the engines mentioned will fit that mount with only slight modifications. Instead of using blind nuts and bolts to attach the mount to the firewall, I usually back up the mounting holes in the firewall with pieces of 1/4-inch scrap plywood and use wood screws. Harden each screw hole with a drop of thin CA.

If the sequence noted in the instructions is followed, there should be little difficulty in completing the fuselage.

The famous Ace foam wings are included in the kit, and the only assembly necessary is the addition of the balsa trailing edges and sanding off the mold bumps before joining the two wing halves. Since wing mounted servos are so much more accessible for aileron adjustments, the alternative aileron servo mount in the wing was selected and the servo well was trimmed into each wing half be-fore they were joined. After the center section trailing edge is cemented into place, the wing can be fitted to the fuselage and drilled for the leading edge dowels and trailing edge mounting screws..."

Scan of die-cut formers, thanks to AugustaWest. 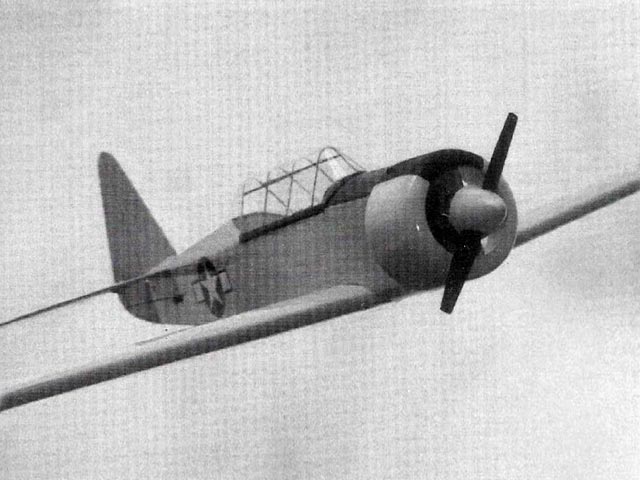