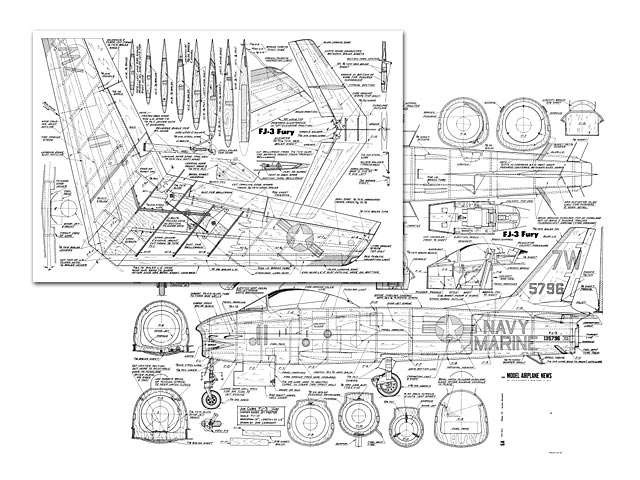 Quote: "Navy's top carrier fighter top control-line scale model for '61 - Winner of open scale at the Nats also winner of the Testor best finish award as well as many other awards for the year. FJ-3 Fury, by Joseph Coles.

Powered by a Wright 365 Sapphire turbojet engine, giving it a speed in the 'high subsonic' range, the FJ-3 is a slightly heavier and larger airplane than the USAF Sabres from which it was developed. This airplane also sports a power boost controlled 'all flying' tail in which the entire horizontal surface is operated for better control at high speeds.

The FJ-3 lends itself quite well in the 1 inch equals 1 foot scale to which the model is built with only two deviations from scale, The first, is a conventional elevator system rather than the 'all flying' tail. Second, the tail end of the model had to be enlarged slightly to accommodate the Dynajet engine and to provide adequate cooling space for it.

Fuselage Jig - The fuselage is constructed on an alignment jig familiar to most of us. A board 3/4 x 6 x 39 inches is used for the base of the jig with blocks 4 x 6 x 3/4 in nailed to it. These blocks are located on the base in positions that correspond with the former locations in the fuselage. Mark a center line on the top of each block, this will correspond to the center line of the fuselage when viewed from the top..." 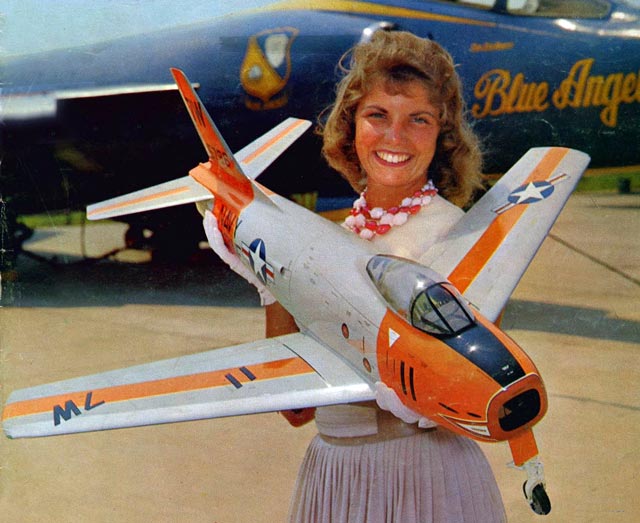