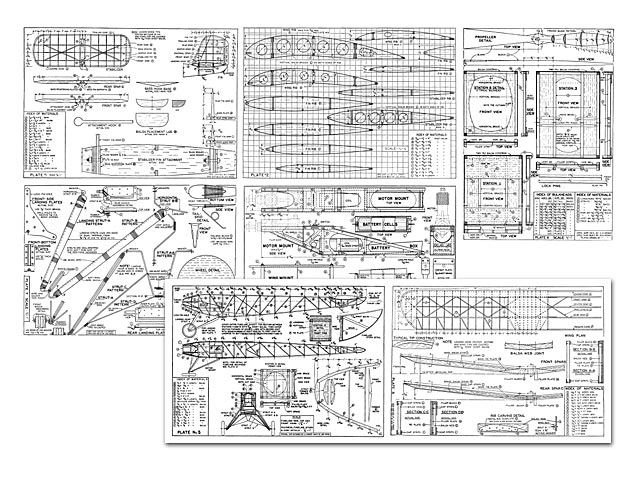 Design by Charles H Grant, the model was built, and the article written by, Joseph Kovel.

Quote: "HUNDREDS of model builders have cherished a dream of building and flying in their own airplane. Usually these aspirations have been thwarted by a lack of money and space, to say nothing of of the difficulties thrown in the path of genius by Department of Commerce regulations. Though these obstacles have undoubtedly saved lives, they have at the same time prevented possible advancement of aviation by diversified individual experiment.

The advent of the miniature gas-engine-powered plane helps the aviation fan to realize his dream, to a large extent. Though these small ships will not take up a pilot, anyone who builds and flies one, receives in the process a complete course in aviation.

Gas engine buggies are not merely models, they are actually miniature airplanes, embodying the same problems of design and construction as full scale ships, even to motors that act balky. If you wish to advance your knowledge of aviation you cannot follow a better course than to build and fly the thoroughly tested ship which we are going to tell you how to build here. It is the result of two years of systematic experiment with two successful gas planes, the K-G1 and the K-G2.

The former placed second in the Eastern States Contest 1934, and second in the 1934 Nationals with a flight of 14 min, 2 sec, and has never crashed since the first experimental flights, though it has been flown many times. This ship weighed 7 pounds, had a wingspread of 8 feet, and was powered with a Brown Jr engine.

The K-G2 was a refinement of the K-G1, weighing 6-1/2 pounds. The wingspread was increased to 10 feet and the tail surfaces enlarged in proportion. On test flights it has shown a consistent gliding angle of more than 13 to 1 and has remained aloft for over 23 minutes on 1/8 ounces of fuel. Its soaring qualities were remarkable on all occasions.

In order to give to our readers the 'perfect' gas job, the finest qualities aerodynamically and structurally have been taken from each one of these two experimental planes and combined to give you the K-G3, a real thoroughbred. Complete instructions and plans to build this perfected gas engine model follow.

Though the plans given here are for an 8-foot ship, those of you who wish to build a 6-foot model of it may do so by scaling the plans to three quarters of the present scale. To build the K-G2, a 10-foot ship, just add four 3-inch sections to each wing half, and increase the rudder area about 10 percent. The stabilizer may remain the same in this particular case. Read the following instructions and study the plans carefully before starting actual work on the model. (You may scale the wing and tail rib curves to size by following instructions. The rib sections are drawn to one-half scale. If you wish further information con-cerning how to make full scale ribs, write to 'The Editor, Model Airplane News.'

Remember that, as in the case of real ships, strength is given first considera-tion in this ship. Be sure to make good cement joints and use a good grade of wood. Avoid creased, split, knotty and warped woods.

Where basswood is specified, try to use bass. However, if you have any trouble getting bass, you may use spruce which is just about as good. Poplar is the next choice. Do not use pine, as it is very brittle.

Take plenty of time building the ship, you are puzzled about anything, write to the author, enclosing a stamped, self-addressed envelope. Now go to it!

Stabilizer (Plate 1). It is rather unusual to start a model by building the tail unit first, but in this case it is done for a very good reason. Most of the boys who read this article and intend building a gas model, have not had any experoience building any large ships..."

Note this is not a full size plan, this is a scan of the drawings as they originally appeared in print, 1935. 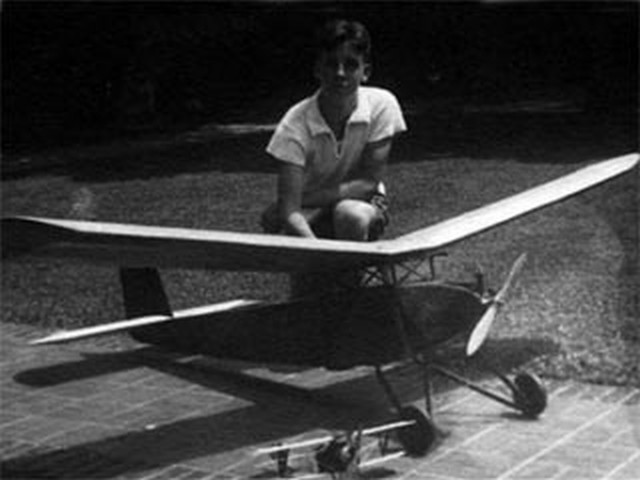