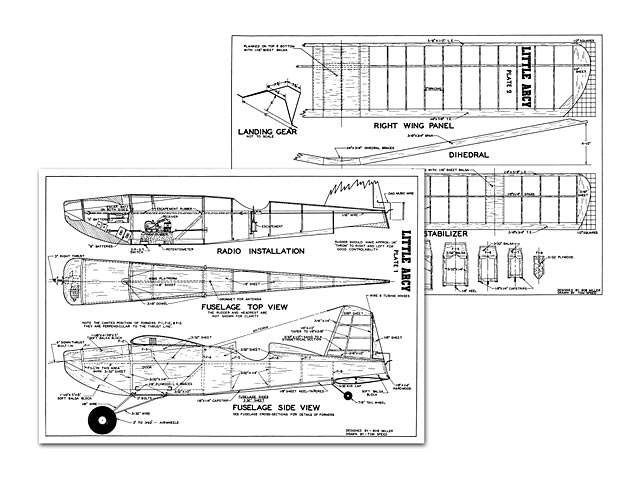 Quote: "Little Arcy is a smooth flying job with no mean streaks to confuse the tyro R/C modeler at a time when he can ill afford to be rattled. Powered with an Arden .099 on glow plug, plus a Tornado Plasticote 9in diameter by 4in pitch prop, this ship has a smart climb with snappy turns. And, after about one minute of engine run, it will have enough altitude to practice three or four 360 deg turns on the way down.

The construction is conventional, so rather than a stick by stick account of it all, we will offer a few important pointers which are the essence of a good R/C model. Select your wood carefully, bearing in mind the job it has to do. Pre-cement all joints and let them dry. Reapply cement and join the pieces and you will have a break-proof joint. Silk, paper or nylon covering is left to the choice of the builder, but our last couple of ships were covered with SGM Silkspan and they still take a beating. One of these jobs hit a train head-on and the covering didn't pop in one single place.

A warp-free airplane is one of your greatest assets. To get straight flight from an out-of-rig or warped plane is quite a task. Build carefully and if any warps do occur, remove them immediately.

Since the wing and tail are of conventional construction, they can be built first to get warmed up. Do not neglect the piece of music wire on the wing and elevator trailing edge as it prevents the rubber from cutting into the wood.

The fuselage side is carefully drawn on a 3/32 x 3 x 36 inch hard balsa sheet. Pin this sheet to another like it and cut the two sides simultaneously. Add the 3/32 x 1/4 in stiffeners as indicated. The stiffeners outline the access door in the side, so they are easily cut out by running a very sharp pointed knife along the proper members. Save the cutouts as they are fitted with hinges and form the finished doors.

The fuselage sides form straight lines from the nose to the tail. Assemble the sides and F1 upside down, with F1 overhanging the end of the workbench. With F1 in place and the tail end cemented together, the unit can be removed from the bench to be finished. Next, add F2 and F4, then the wing saddle. Add the rest of the bulkheads and finish the balance of the sheeting. The sheet fill-in around the wing saddle is accomplished with one piece between F3 and F4 while scrap balsa can be used between F2 and F3..." 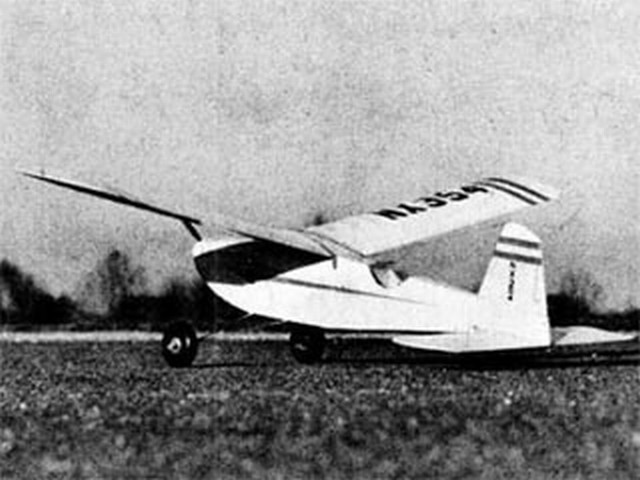