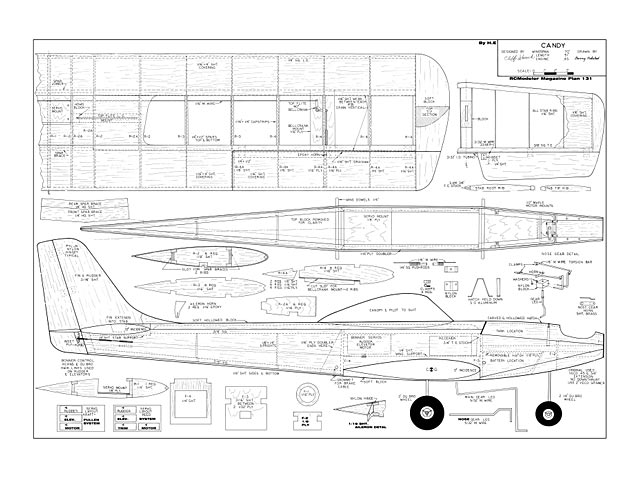 Candy was conceived shortly after the Larks annual contest in October 1962. Up until two weeks before this event, I had been flying a Stormer (oz5794), when, as sometimes happens, I suddenly found myself without an airplane! In talking with Jerry Pullen, designer of the proportional system I am using, it was suggested that I use a Viscount (oz5659) kit which he had won at a local event. The Viscount was easy to build, and a week later was in the air, going on to place third in the Larks Annual.

Two things were very impressive about the Viscount - one was its ground-handling characteristics, and the other was its smooth inverted flight. At this point I took a good look at the symmetrical airfoil, and decided to design a ship around this section. This new plane was created in order to take advantage of the full potential of the Kraft proportional system which would be used with it. In addition, certain other design criteria would have to be met, including excellent ground handling characteristics (even in high winds), ala Viscount, plus completely smooth inverted flight and outside loops. Add to this the requirements of a good-looking ship that would be easy to construct, and you have the formula which evolved for Candy.

I might explain at this point that. the name 'Candy' was brought about by being bankrupted by Aero Gloss Candy Apple red dope. Pactra had just released their line of candy colored dopes and I scouted all of the Los Angeles area for enough of the little three-ounce cans to finish the prototype. Believe it or not, it took 32 of these three-ounce cans to get three coats of color! That just about broke me up - in more ways than one! Uncle Sam's sailors don't get wealthy at their jobs!

The first Candy had, full-span ailerons and two degrees of incidence in the wing and stab. This left something to be desired, however, so the present configuration was tested and proved to be more than satisfactory. This can be attested to by the fact that three of the four existing Candy's qualified for the finals: at the 1963 Los Alamitos Nats. The fourth model was not flown.

Before getting into the construction of the model, it might be worthwhile to bring up a few points for the beginner who is thinking about building this ship. First of all, Candy is not a beginners airplane - the construction alone dictates this fact. The wing, as you will notice, is embedded in the fuselage and will not take any hard knocks without severe fuselage and wing damage..." 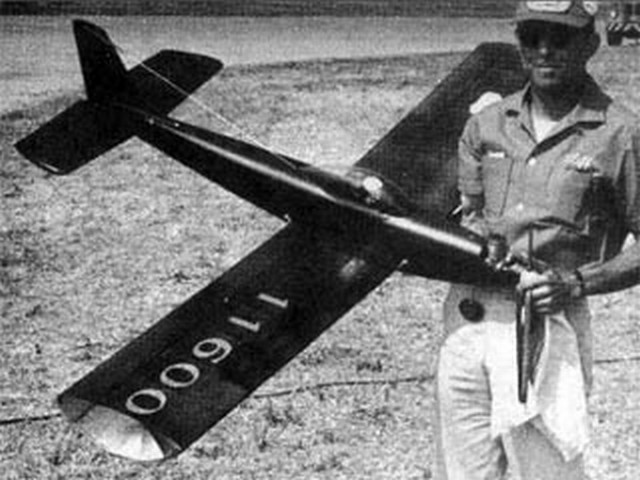