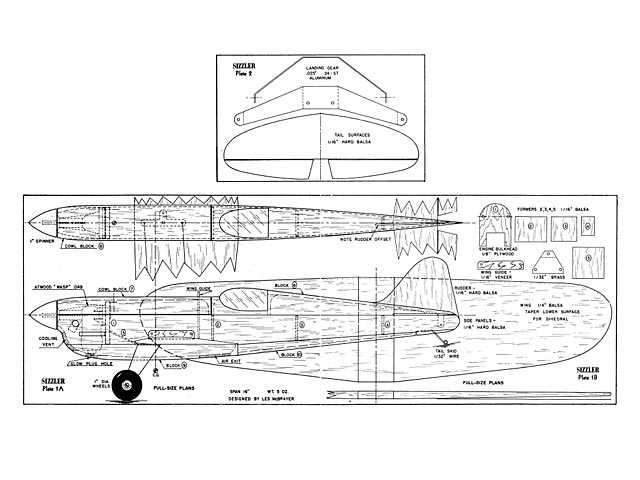 Our Sizzler was designed to follow in general appearance some of the pre-war Thompson and Greve racing planes. Those racers will always be remembered for their sleek, colorful appearance and great speed. Your Sizzler can be used for proto speed flying, for team racing, or for sport flying 'just for fun.'

The new Atwood Wasp .049 glow plug engine was selected to power our model because of its great power and very small overall dimensions. Naturally other engines in the 1/2A class also may be used - merely change the location of the engine bulkhead to fit your particular engine.

Wing: Since all plans are given full size, no time need be wasted in getting started. Outline the wing on 1/4 sheet balsa. Then, cut out and taper the lower surface to form the dihedral an-gle, and plane and sandpaper to airfoil shape. The thin flat bottom wing section (shown on the side view plan) will give good stabil-ity and high speed. Mount the bell-crank on the top surface of the wing, using a small machine screw through the wing. Cut the wing guide from 1/16 plywood and cement it in a shallow groove cut into the wing tip, as shown.

Tail Surfaces: Outline the rudder, stabilizer, and eleva-tors on 1/16 hard sheet balsa, cut out, and sandpaper to a streamline shape. Note that the rudder extends down into the rear fuselage block..."