Quote: "SOARING is the most beautiful and awe-inspiring form of flight, to say nothing of its being the most efficient and graceful. Even where the mighty gas model is concerned, the real flight does not commence until after the engine has cut off.

Modelers have come to regard the soarer as a complex, high efficiency machine, but this soarer is the proof that grace and beauty may successfully be incorporated in a simplex form of construction. As you will notice from a glance at the plans, it is composed of a minimum number of parts, thus making it possible to build it in a few evenings. Coincidentally, this simplex construction is one of the strongest, rendering the model capable of withstanding almost any kind of abuse.

High efficiency is really the byword of this unique ship, for its high aspect ratio wing and low drag fuselage is a combination that is mighty hard to beat. No doubt your many hours of soaring pleasure will conclusively prove this point to you, for certainly my words alone could not approach a true justification of the ability of the ship.

As you may have noticed, the short tail moment or close-coupled force arrangement, enables the ship to maneuver in very tight circles without spinning. This helps make the soarer particularly susceptible to thermal flights. But we don't think you'd mind that one bit.

As we told you, the construction is extremely simple; now we'll show you just how simple.

Article page, text and pics, thanks to RFJ. 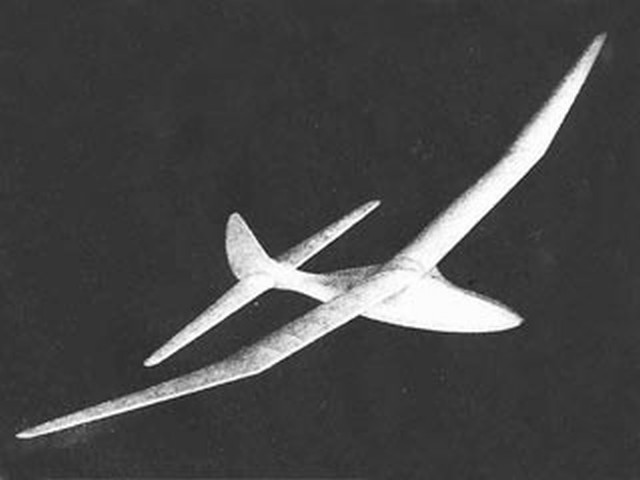