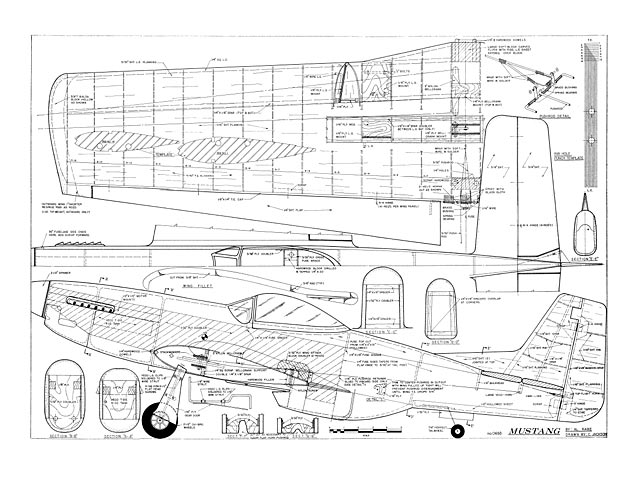 Quote: "Semi-scale for control-line stunt. What's next in the scale trend? Try a competitive C/L stuniter that still looks real! Mustang, by William A Rabe Jr.

SIX years ago I worked for a company that converted war-weary ex-Canadian 51's into fast executive aircraft. I ferried them to Florida, test flew and then demonstrated and delivered the conversions. Four years later, wanting to model the Mustang, I started a control-line version. Visions of the staggering, unstable flight typical of scale types, seemed an insult to the F-51 so it was never finished.

Then Bob McKinney, friend and Nats stunt finalist, asked me to design an F-51D stunt ship. Trying unsuccessfully to convince Bob that the F-51C would fly better because of the increased side area aft, I drew tip the 'D' in stunt configuration. It looked great, but there was still concern about the side area aft, so we shelved the plans.

For the next few weeks I thought about solutions to the problem of directional stability that might make the F-51D practical, The problem, simply stated, was that hard, outside corners cause loss of line tension due to an accompanying inward yaw. This yaw is more noticeable on ships with little side area aft of the CG. Coupling the rudder to the elevator might produce a compensating yaw on all pitching maneuvers. The next step was to try it out. A movable rudder was jury-rigged on a simple, straight-wing stunt ship called Oriental (oz6494) designed by Dee Rice. it worked even better than I hoped, and this ship was used for several contest wins.

With the problem of directional stability licked, I decided to go ahead with the design and construction of an F-51D. I must have been a little light-headed with the successful movable rudder because it was decided to go all out and use a removable wing, dihedral, long scale landing gear, and an extremely large frontal area for maximum realism. Such ideas were relatively untried on competition stunting; a combination of these features in one stunt ship certainly sets it apart from the conventional.

Anyway, it worked.The Mustang qualified at the Nats, in a wind described a 15 kts plus, on its 8th and 9th flights since new. On its 10th flight it was 5th in the finals' first round. Unfortunately, it was decided to throw out that round anid refly the finals Wednesday. I had to loaye the Mats and return home to fly a trip out of Dallas that same Wednesday night. So ended the Nats effort..." 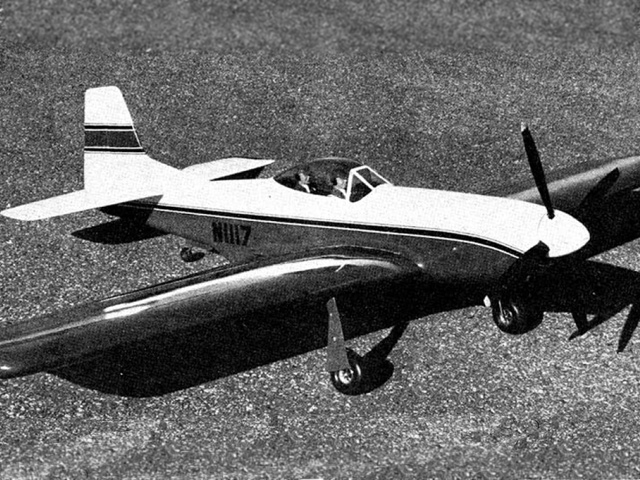