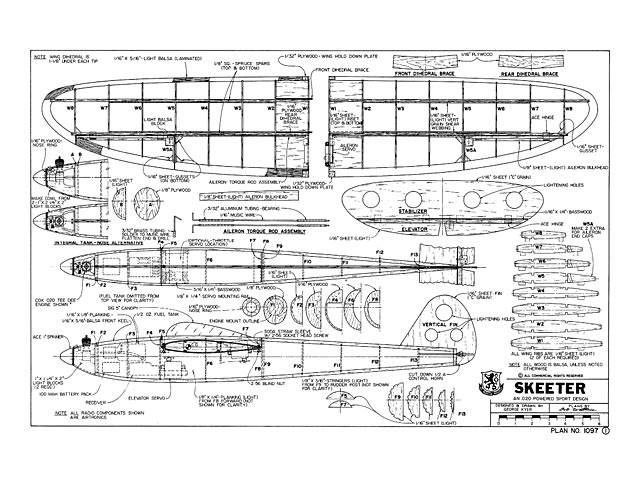 Quote: "Need a break from large, high cost projects? Why not give this little buzz bomb a try?

As with most scratch designers, I developed Skeeter to satisfy certain personal requirements that no model now available fulfills. I fly out of a large pasture that doesn't have a runway. This restriction limits me to smaller models with no landing gear. I have tried models up to .40 displacement, but you have to have an arm like John Elway to launch them and my arm is more in the wet noodle class. I prefer small airplanes anyhow. I know that the large models fly mom realistically and are crowd pleasers, but I could never see taking out a loan to buy an engine, going to the lumberyard to buy wood, or hire a moving van to transport the monster to the municipal airport to fly it. My hero is Ken Willard. I like small models no that I can throw two or three airplanes (with the wings on) in the back of my small pickup, drive to my pasture, pull one out, crank it up, and fly; no muss, no fuss.

Skeeter was created with certain design parameters in mind:

(1) It had to be shoulder or mid-winged. I didn't want a top winged trainer type airplane, and a low winged airplane makes hand launching difficult. I settled on a shoulder wing because a mid-wing displaces too much of the room for radio equipment in a small airplane.

(3) It had to be aesthetically appealing. It could not be what I call a cookie cutter design that compose 90% of today's models. The only way you can distinguish one from the other is by the name. Specifically, no constant chord wings or square wing tips; no strip ailerons, and no slab sided fuselage. I wanted something with lots of curves, reminiscent of Marilyn Monroe rather than Cher or Twiggy.

Skeeter resembles a WW II fighter more than I envisioned, but I believe it has graceful lines. It also flies well. I am particularly pleased with the way it grooves. It is not at all twitchy like most small models, but it can be overly sensitive if excessive control throws are used. Use those recommended on the plans. It is fast, because of its low drag, but very easy to control because it goes where you point it. Stalls are very predictable with no wing drop. I am not a hot dogger, so I can't say it will perform all acrobatic maneuvers, but it loops, rolls, and does inverted flight with ease. As most authors say about their designs published in model magazines, Skeeter flew right off the board with no changes in configuration. I did increase elevator throw for more elevator authority at low speeds.

The only negative feature of the model was the limited endurance with the integral fuel tank. I could only get about 3-4 minutes flying time on a tankful. I finally got exasperated and made a 1/2 oz tank from a fiberglass catalyst bottle since a comparative sized commercial tank was not available. I had also yearned for the ability to make low approaches, spins, and power-on stalls - all impossible without a throttle. I found that Cox made an exhaust restrictor throttle for their reed valve .020. I obtained a cylinder, piston, throttle sleeve and put it on my Tee Dee engine. Performance did not suffer much with 20,000 rpm at max throttle and a reliable 9,000 rpm idle.

The radio compartment was cramped with a Tower Hobbies' micro airborne pack with two servos. Finding room for a third servo required re-engineering the interior. The main change was moving the aileron servo as close to the wing trailing edge as possible. This moved the CG aft and I had to add nose weight for balance. Adding a 1/2 oz servo increased the weight from 9 oz to 11 oz, I recommend that if you decide to build the model, build it with two servos and the remote 1/2 oz fuel tank. Both alternatives are shown on the plans.

Skeeter is very esoteric. It is not an instant gratification design. It is also not for the beginner for either building or flying. It requires building techniques that are not common in today's R/C models, but they result in strong, light models.

Well, if you want a unique model and this article has piqued your interest, get the plans and follow along on the construction sequence. Oh, by the way, have you wondered why I named it Skeeter? Have you ever heard an .020 tam 20,000 rpm?

Construction. First of all, make yourself a kit by cutting out the various parts. I have found that copying the plans on a 1:1 ratio copying machine is the best way to preserve the plans and have accurate templates. After copying. I use UHU Stick glue to adhere the templates to the wood. If you cut the pans out within ten minutes after gluing, the template will easily peel off the wood...." 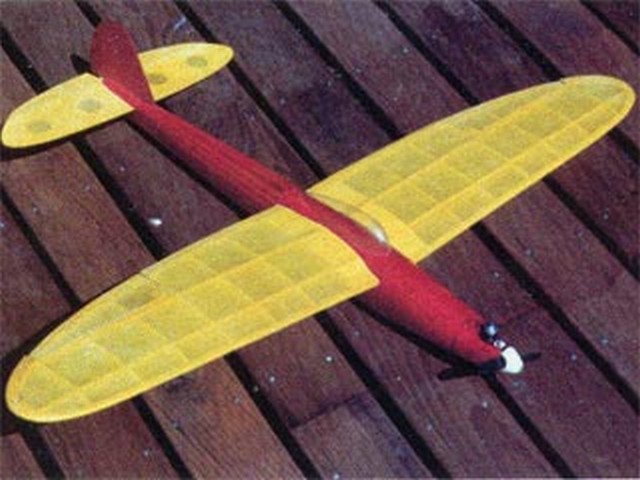