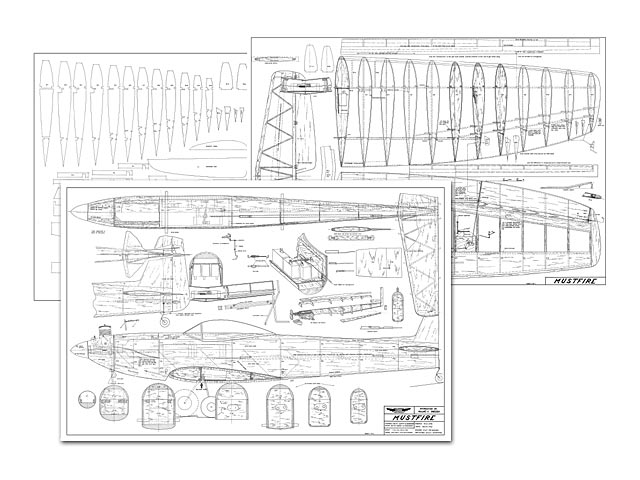 Mustfire. Radio control low wing multi aerobatic model, for .45 to .61 power. This design was later kitted by Frog in the UK.

TO be honest, when we first saw Frog's kit for the Mustfire, our immediate mental reaction was to question the advisability of kitting a multi aerobatic design at least five years old.

The Mustfire is a Swedish design, the creation of Jesper von Segebaden, and has been highly successful in Sweden. It has also been kilted in Germany. The first appearance of the design outside Sweden was at the 1962 World R/C Championships at RAF Kenley, where the model was used by Swedish team member Per Eliason, to place 15th. We relieved von Segebaden of reduced scale drawings which appeared in Aeromodeller December 1962 edition. Eliason also used the same Mustfire at the 1963 World Championships at Gent, Belgium where he managed to break the fuselage in two, when the model hit an officials' tent during a landing approach.

The Mustfire spans 67-3/4 in, and has a generous wing area of 790 sq in. Wing section is a semi-symmetrical 12 percent thick airfoil. The shape and size of the machine, with its large wing, bulky fuselage, inset ailerons and provision for tailwheel type undercarriage, tend to identify this machine with the daddy of 'em all, the good old Astro Hog (oz4756) and it was this similarity that let us to our initial reaction to this kitting project. Subsequent experience has proven just how wrong you can be.

The kit contains a vast number of die cut components, all crisply cut in the sample received. Fuselage sides are cut in one piece, and the full depth wing spars are cut and notched ready for use. The builder is offered the choice of tricycle or tailwheel type undercarriage, steerable noseleg and main undercarriage being provided, together with other hardware including nylon control horns, aileron bell-cranks, and a fine moulded cockpit canopy.

The wing structure consists of a main spar, a rear spar, and a false aileron spar, each being full depth types. Each spar is notched to accept the wing ribs and is shaped with a surplus spar fillet on the bottom..."

Update 14/01/2020: Added kit instructions (from FROG kit in English, and from SEMO kit in Swedish), thanks to Pit. 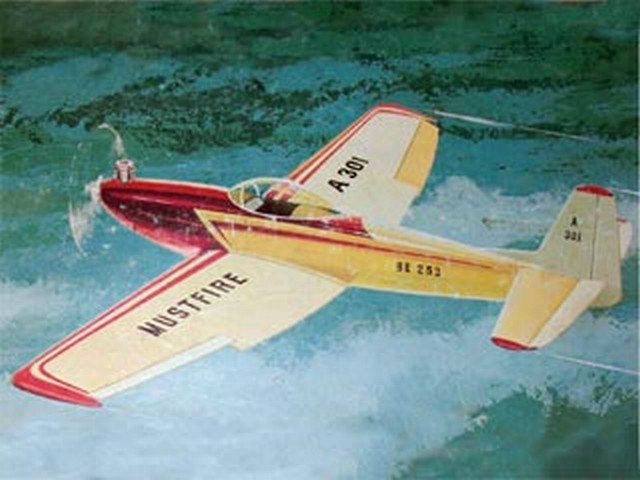 Hello, two photos of my model build from the Mustfire plan [more pics 004, 005].
Dietmar - 16/11/2018
Another Orion (oz927) clone like the Tian 40 (oz11816). Both present at Kenley 1962 FAI Pattern Championship. Orion design was obsolete in 1962 and Kazmirski the original Orions designer flies with the Taurus (oz612).
But clones were still good fliers and little modification are necessary for proportional RC instead of Reeds RC system (differently responsive).
ps Comment valid for Tian 40 (oz11816) too.
pit - 19/12/2019
I don't think it's correct to call these planes clones. I'd rather prefer evolution or development in this context, maybe the next logical step. Both Mustfire and especially the Tian-40 had their own, technically different and interesting solutions for certain aspects, things like hinging, balanced rudders, different profiles etc.
Besides that, still today they (Mustfire and Tian-40) are rather pretty and classy planes, not just old ones.
Hubert - 19/12/2019
Here is my version from the Mustfire plans [pics 007,008]. Flies like a charm. Engine is K&B .61. Turtle deck added, rudder and elevator mods rounded. And the result is not bad. I named it Covid cause I was confined when I built it. Thanks.
Jean Pierre Paris - 12/10/2020
Add a comment