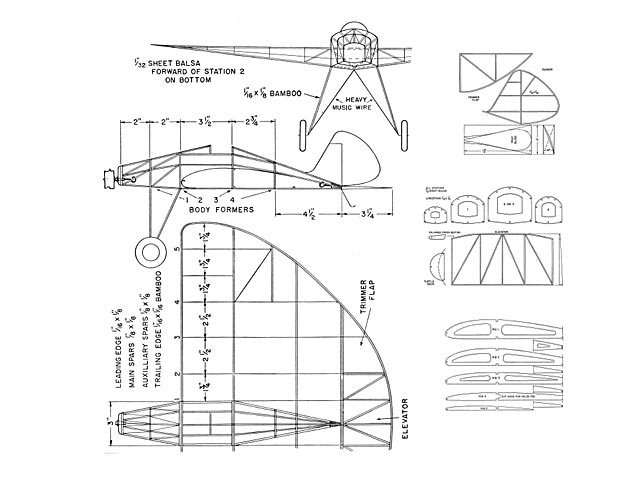 Quote: "Building the Arup Flying Wing. If You Wish to Build and Fly One of the Most Unusual Models Ever Designed, Try This One on Your Work Bench. It Is a Remarkable Flier. Arup Flying Wing, by Gordon Englehart.

THE Arup Flying Wing is one of the many lightplanes which have been produced recently as a try at the goal of the 'flivver plane' or a plane which the common man would be able to buy and fly. The Arup is perhaps the nearest approach yet to this ideal. It is light, yet strong, low-powered, still quite fast, has a low landing speed and is very economical to run. The original was powered with a 40 hp Continental engine, had a top speed of 97 mph and landed at only 23 mph. There was practically no attempt made at streamlining (as is usually the case with experimental models) so that the top speed could have been raised well above the 100 mph mark if resistance had been cut down.

So much for the background. The model presented here is an excellent flier and is very sturdy. These models never seem to crack up; they merely disintegrate from old age and abuse. If you take time and work carefully, you will have a flying model you can well be proud of.

One more thing before beginning the instructions. Many beginners have gotten so accustomed to having everything done for them in the way of completeness in plans and instructions, that they have left their sense of initiative and inventiveness, far behind. That is unfortunate because model building is supposed to develop new thoughts and ideas so that if everything is practically done for the builder, all benefit is lost. For this reason, several small details have been left out of the plans but not out of the instructions. All these parts may be made very easily by studying the instructions carefully; and it is hoped that this will set our embryo model builders to work at their own problems instead of merely copying the results of somebody else's labor. Now that I've had my say, let's get down to work.

Wing Frame. The wing is made first because it is the foundation of the plane. The body is built directly on the completed frame, so there is no other place to start. Start by cutting out two of each rib section of 1/16 in sheet balsa. They are hollowed out as shown on the plans to lighten them..." 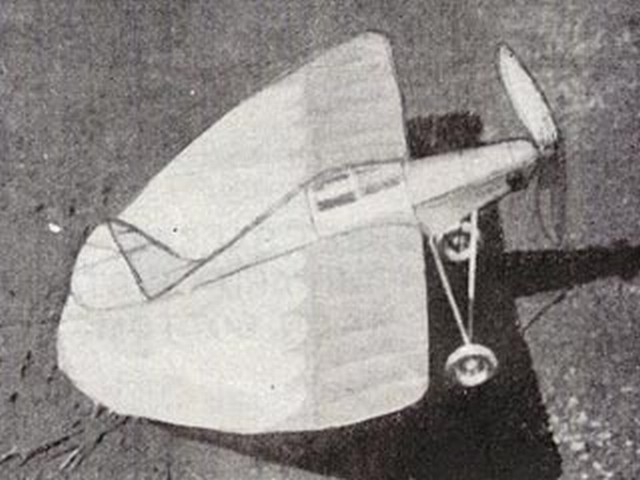 You'll notice I have not finished building the model Flying Wing [more pics 004, 005]. I have to fix wing joints - fuselage in order to apply the coating. I will update you on the progress of the work and try to do the best photos.
Vince - 02/06/2016
Add a comment