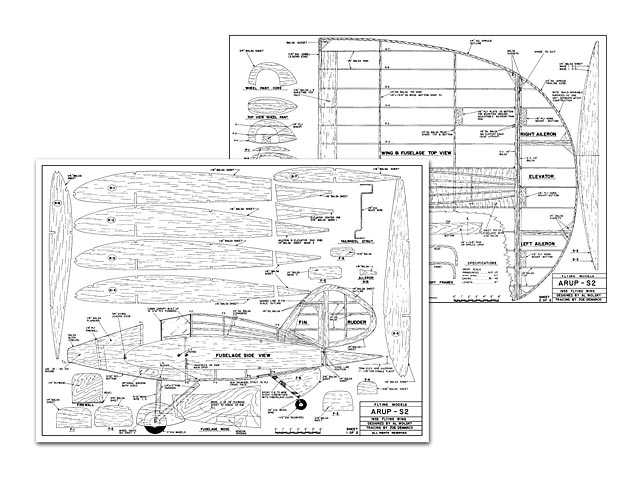 One of the most interesting airplanes to come out of the 1930s was the Arup, (pronounced 'Air-up'). The idea and shape was conceived in South Bend, Indiana by a Dr Snyder, who was a foot doctor. One day in 1926 he tossed a felt heeled lift towards his desk and noticed that it glided. This intrigued him so much that he built model gliders and rubber band powered low aspect ratio elliptical winged planformed models which he flew. They all showed remarkable stability. Next came a glider of 20 foot span that was at first towed by a car and made many flights. After some 50 flights, a 26 hp Henderson Heath motor-cycle engine was installed. After more powered test flights it was decided to build a new design.

The Arup Mfg Co was formed and in 1933 a new design designated Arup S-2 was built. Specifications were 16 foot span, chord was 14 feet, power was a Continental four cylinder model A-40. Top speed was 97 MPH, stall was at a 35 degree angle, and take-off was in 4 to 5 seconds.

Trying to stall it would result in it slowing down to a point where it would mush along while losing altitude. Applying rudder would result in a wallowing turn but no spin. The S-2 was quite an airplane. It had several hundred hours of flight time including some around the Washington, DC area. At this time it was demonstrated to the NACA, CAA, and the Army.

One of the NACA men who observed the flight was a Charles Zimmerman who a number of years later obtained a patent on a similar type of aircraft. It was probably during 1942 that he became project engineer on the Chance-Vought XF 50-1, which was the Navy's Flying Flapjack of 1944. Had it been successful, every big ship in the Navy would have carried one, increasing the fleet's striking range and power.

In early 1934 a new commercial design, the Arup S-3, was started. This model, 22 feet in span, had two-place side-by-side seatings. Power was by a LeBlond engine of 70 hp. The sleekness of the S-2 was lost in the cabin design of the 5-3 along with a long tricycle gear, a squared-off nose, and windshield made it look like a bug.

One test flight revealed it did not perform as well as expected. It was fast but did not seem to have much lift. The day after the one and only test flight it was discovered that someone had removed cotter pins from the elevator clevis bolts. After this happened it was decided to guard the plane at night. After a few quiet nights, tired from working both day and night, the man on night watch got bored and left. A few hours later the plane was doused with gasoline and ignited.

The arsonist was never apprehended, and the loss of the S-3 was a severe blow to the company. Not only did they lose a $10,000 air-plane (uninsured), but they did not get sufficient flight time in to test this latest design.

After the loss of the S-3 some new people were brought into the company and shop was set up in Indianapolis. At this time the com-pany started work on a new model, the S-4. This took to the air in the spring of 1936. Demonstration flights were made all over the Midwest to entice buyers, but to no avail. By now the company was in bad financial trou-ble. What happened to the S-2 and S-4, no one knows for sure.

The fact that four Arups were built and flown for a total of over 1000 hours without an incident is testimony to the fact that the concept was a success.

Model construction. The wing has to be built first, as the fuselage is built on to it later. Start by cutting out all 14 wing ribs from 1/8 inch sheet balsa; it will be necessary to butt glue sheets together (use Hot Stuff) since rib #1 is over 4 inches in width. Next cut the main spar from 1/4 inch thick hardwood. I used a piece of pine; however, spruce would be a better material if you can get the piece required. Now position the main hardwood spar, the rear bottom 1/4 inch square spar, and the rear S-2 balsa spar over the plan. At the same time you can also con-struct the rear section of the wing which is the elevator and the two ailerons..." 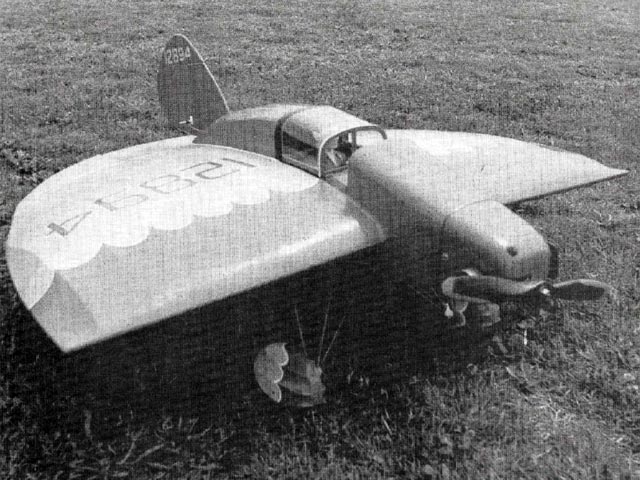 On YouTube I found Odd Ducks, an archive collection of clips from Movietone. Last on the reel is a Hoffman, film dated Dec 20 1934. Noticeably similar to the Arup.
apoormarksman - 10/07/2019
Add a comment