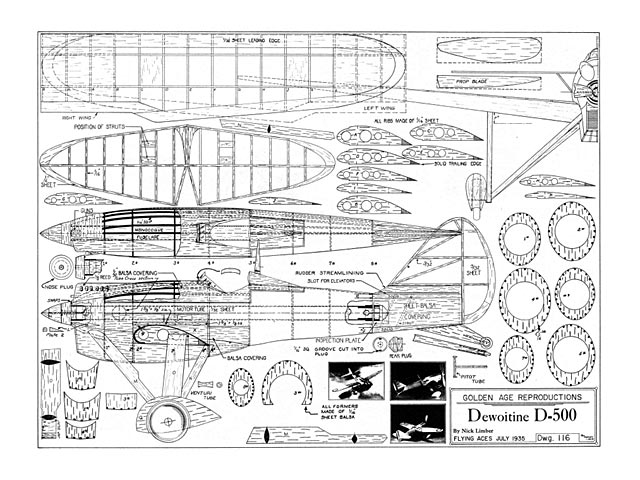 Dewoitine D-500. Designed by Nick Limber and originally published in Flying Aces, July 1935. This here is a later redrawn copy by Golden Age Reproductions, in 1975 (ref 116).

Quote: "Build the Dewoitine D-500. Here's a famous foreign ship of today that every air-minded model builder will want to construct. It's the French Dewoitine D-500, one of the outstanding low-wing monoplanes of the world at the present time. Follow the plans and direc-tions given in detail here, and you'll have a beautiful model of this famous French ship.

With the adoption of France's new air policy back in 1931, French officials were seen gathered in small groups, whispering something about drawings submitted to the Air Ministry by the Dewoitine people. Some weeks later, the Dewoitine factory was in full swing, working on two new pursuit ships to enter in a governmental contest.

Nothing more was heard of the ships until the beginning of 1933, when a mysterious-looking low-wing monoplane was given the gun and, roaring down a lonely airport, took the air before a small group of distinguished gentlemen. This was the beginning of the severe tests the new ship was to under-go for the next few months. At the close of the summer, people outside of official circles had a faint idea as to the performance of the ship.

First, it became known that Marcel Doret was test pilot during the entire period the ship was put through the severe maneuvers. It also was said that the ship climbed to an altitude of 10,000 meters in 25 minutes. The ship was reported to have a speed of 371 kilometers per hour at a 5,000-meter altitude. The Hispano Suiza 12-cylinder engine was said to supply 500 hp at 2650 rpm.

The Dewoitine D-500 is of all-metal construction. The wing is of cantilever type and is built in three sections. Two guns are placed in the nose of the plane, before the pilot. The ship is equipped with a radio and also with oxygen tanks for high-altitude work. The pilot's seat is adjustable in flight. The cockpit is placed in such a position as to assure the pilot the best possible visibility.

The second of the ships, the D-510, is said to be like the D-500 in appearance but slightly superior in performance. Information concerning the D-510 has been kept secret so far.

Fuselage. Before starting anything else, trace body forms from No.1 to No. 8 on a sheet of 1/16 in balsa. Cut them out with a razor blade or sharp knife and proceed to sandpaper them. Care must be taken in cutting out the hole in the center of each form. I would suggest burning it out with any instrument that is cylindrical in shape. Now cut out the slots for the 1/16 sq stringers to fit into. When this is completed, glue the proper amount of 1/16 sq stringers into the slots cut into the forms for this purpose. (Care must be taken to glue the forms the proper distance apart from each other.)

When your forms are assembled, select a medium-soft piece of balsa 1-3/8 x 1-11/16 x 2-1/8 in for the nose, and start tracing and cutting out the side view. The same is done with the top view. When the nose is completely sand-papered and shaped, cut it in half from the top down. Cut out the inside until the walls are about 1/4 in thick. Now cement the two pieces together and glue the completed nose onto the completed section of assembled forms..." 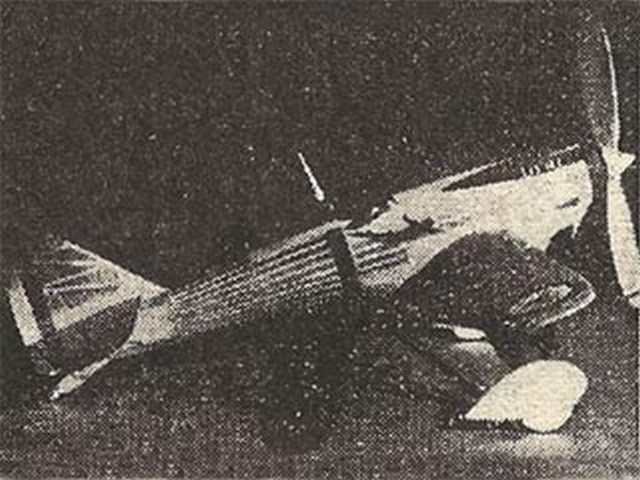 I have always thought this aircraft to be particularly good-looking. I found the plan to be a challenge, at least for my skills. Perhaps the model could be built as shown in the plan, but I have had to make these corrections: 1. The fuselage profile is incorrect. While there was an early development that superficially resembled the plan, the actual airplane has a different profile. The major issue is the shape of the radiator and the low position of the cockpit. Other model plans of this airplane are better drawn. 2. The fuselage formers are too cylindrical in the area of the wing. This makes the mating of the wing and fuselage awkward. The actual airplane formers were somewhat flat-sided in the wing region. 3. The wingspan seems excessive given the number of ribs shown in the plan. The airfoil of the wing root and remaining wing ribs is too ?thick?. 4. The construction method for the fuselage does not use keels or a box structure. Instead, the plan is based on pre-bending stringers and then mounting the fuselage formers to them. Unless the builder uses some sort of jig, this technique makes the construction quite difficult. I mounted the formers on a keel, attached the stringers, and then cut out the keel to remove unnecessary weight. 5. The motor mount method is typical of models from this period. A simple modification to today?s methods is recommended.
alfakilo - 26/09/2018
Add a comment