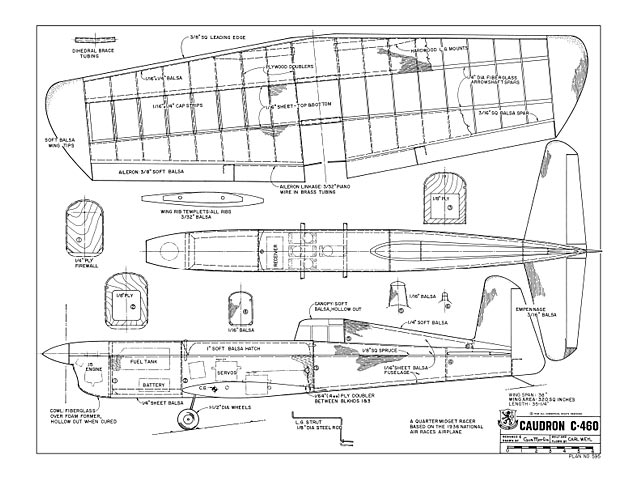 Quote: "Gus Morfis' model of the famous French Caudron of 1936 National Air Race fame has the potential of a winning Quarter Midget with the added bonus of a classic flair.

If Carl Weyl hadn't tried to thread his regular Quarter Midget Racer through some pylon guy wires we wouldn't be doing this article now.

The local Quarter Midget racing scene was pretty well dominated by Shoestrings and Mustangs, and other than by color schemes, it was getting tough to tell the various models apart. Accordingly, we figured it would be worthwhile to look at something different and see if we could add some new dimension to the sport.

In the 30's the design of high performance racing planes made fantastic strides. Many of these planes were very cleanly designed and would lend themselves to a distinctive and competitive model. One plane that I always remember as 'looking like a racer' was the French Caudron C-460 of 1936 National Air Races fame. There has always been something about the unusual canopy and long lean nose of this machine which make it stand out in a line-up. When you look at the canopy in profile it has a high, blunt appearance but when you see it from the top it is really very narrow with a sharp entry. I can't help but wonder about the pilot however, he must have had a narrow pointed head, with a crease on top!

Our preliminary sketches looked promising. The Caudron seemed to have all the features we were looking for, distinct appearance, clean lines, inverted engine (which permits shorter landing gear) and reasonable building time. Carl sort of grumbled about the inverted engine, but after a while he quieted and we decided to forge ahead - after all, the next contest was only a few weeks away. A flurry of building and re-building resulted in the first flight taking place on December 28, with the contest scheduled for the 31st.

Carl made two flights with the Caudron to make adjustments and check the handling. Since it looked real good we felt there was no need to take anymore chances with it before next Sunday's race.

Race day saw 28 entries competing. I wish I could say that we repeated the clean sweep Carl made with the Spirit of St Louis (oz5807) last year, but it was not to be. He won the first two heats he flew in, setting some of the top times, but cutting pylons cost him points. He won the third heat clean. He took a second in the fourth heat..." 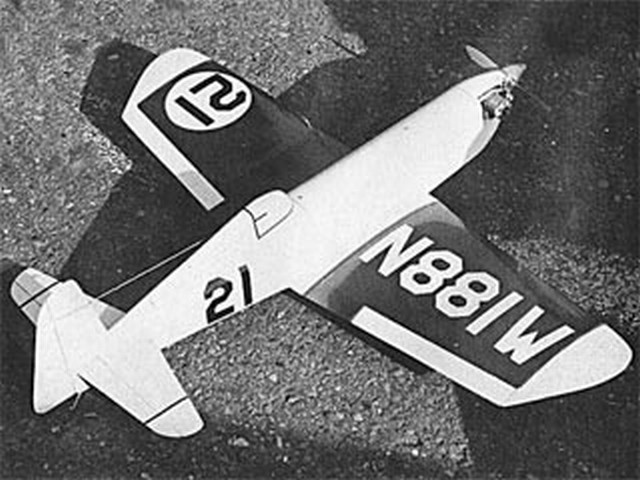