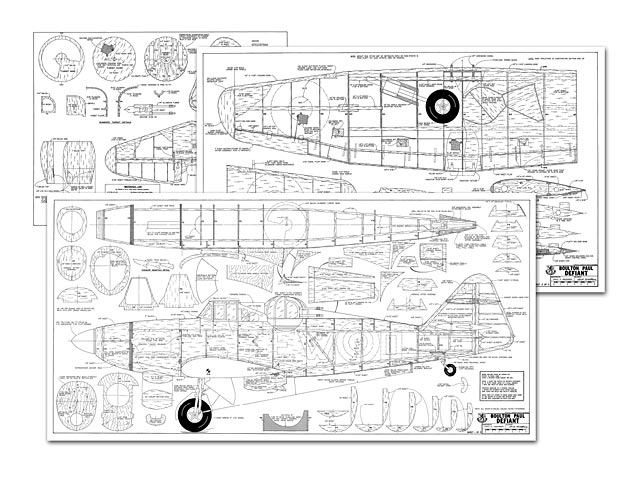 Quote: "Britain's turret-equipped fighter was a hero at Dinkirk and the final blow odf the Battle of Britain. As a model, it is a dramatic performer. Boulton Paul Defiant by David Andersen.

In model form, the Defiant is a delight to fly. The turret demands an unusually long fuselage, nearly as long as the wingspan. This makes it groove. Generous side area and low dihedral combine to make straight, axial slow rolls that hold a constant roll rate with a fixed aileron deflection. The plan-form is very pattern-like, resembling the top-view of a Kaos (oz6251).

With the engine and muffler combination shown, engine sound is a low growl, yet it meets the AMA's goal of 90 db with power to spare for tall stall turns and generous loops. Flaps have little effect on pitch. Steep approaches remain stable due to the long air-distance from the flaps to the tail. Slow fly-bys with gear down and partial flaps are dramatic.

The airplane's only short-coming is one common to all British fighters of the era - the gear is too far back for good rough-field ground handling. Too much wheel drag will tend to tip the nose over. Fly from a hard surface or a smooth grass field or else you will break props. If these options aren't available, tilt the gear legs forward as needed.

The model presented here is exactly scale. It was designed by enlarging the Bob Holman drawing #3014 and filling in the structure. Even the airfoil and washout are scale. Upgrading to precision scale is possible by adding surface details. The author's prototype won the Scale Flyers of Minnesota Pilots' Choice award, and Roy Maynard's night-fighter version won third place at the 1993 Toledo Expo.

If you wish to supplement the Spitfires and Hurricanes at your club's flying field, perhaps you should consider pulling a Defiant from up your sleeve. So. while you wait out the winter blitz, drop a Glen Miller record on the Gramophone, pour a pint of bitters, and raise a toast to the King. Then gather all documentation and materials and get ready to begin construction. Before long, you too will be flying for England..." 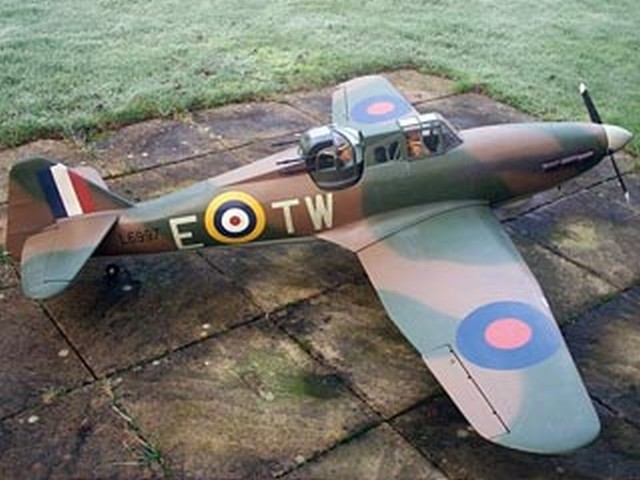