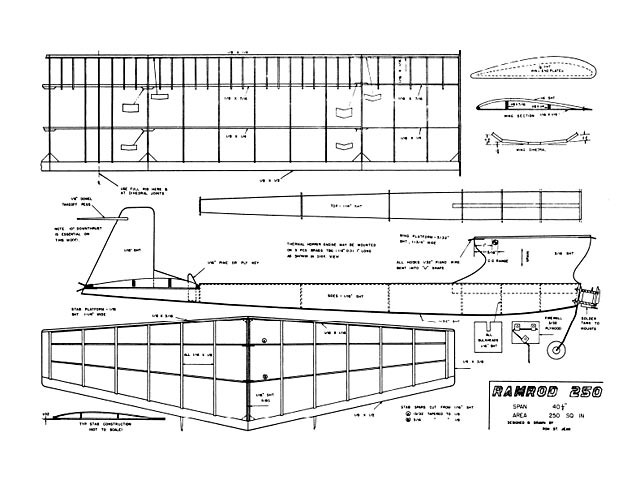 Quote: "Biggest winner of the 1955 season, in all sizes and in many hands, was this California design. Plans show the Half-A. Ramrod 250, by Ron St Jean.

Ramrod was seven years in the making, but has just recently established itself as one of the most consistent winners in California and at the 1955 Nationals. Let it win for you in 1956.

The ship is easy to construct and even easier to adjust, most of them checking out in three flights! Performance is excellent - honest dead air time is four to five minutes, depending upon size of model, weight and engine. Some 7 am flights of seven minutes plus on what I like to call 'dew thermals' are not uncommon. The phenomenon mentioned is caused by the re-absorption into the air of dew lying in grass or hay after the morning temperature rises above the dew point. This results in a slight buoyancy, making many a modeler believe his four-minute gassie is a six-minute bomb. (Believe it or not, there are sometimes thermals at night - I know; a '750' with lights flew away at 10 pm one evening and it has not been heard from since!)

Like other successful gas models, the Civy Boy (oz10174), for example, Ramrod is the culmination of many years of trial and error designing. It all started in 1948 after the Olathe Nationals. Three other designs seemed outstanding in my mind and my purpose was to produce a model better than any of the three by combining what I considered the best points of each.

The first model, called Cowboy, had general proportions very similar to the 1948 Civy Boy, with simplified sheet balsa fuselage construction as in the Zeek (oz5040) and thin airfoils, as in the 1948 Hogan (oz5350). The first Half-A and A Cowboys were very successful, both winning first places in large local meets. Later 'improvements,' however, evolved models just full of bugs. On the basis of the first wins registered (1950), several plans were asked for and provided. Interest in Cowboy petered out, though, because it simply was not good enough to perpetuate itself. Ramrod, I'm certain, can sustain itself and grow, because it is a bugless design.

During the ensuing years, configuration was changed; construction was modified; airfoils were thickened; dihedral in tip sections was increased; tail and nose moment arms and stab percentage were reduced; pylon was shortened, then relengthened; retractable landing gears and one-bladed props were incorporated, then discarded; thrust line was raised, then relowered; that's enough to give you an idea.

The design was not finalized until late in the fall of 1954, but at that time another problem arose: what was the best size model to build for each of the engines I was using?

Until that time I had been going on the 'hotter the better' theory, where one attempts to put his little sky-rocket all but out of sight in the allotted 20 seconds, hoping it will take five minutes and 40 seconds to fall through, even with its poor glide. At this time the .19 - .23 Ramrod had 350 sq in of wing area. This was a four minute model but had the following had features:

1. It was stable under power, but hard to control, since it was so sensitive to rubber adjustments;
2. A re-check-out was necessary at each flying session, because of very slight warp changes;
3. The glide was fast enough with its high wingloading to cause many broken props and rips in covering.

Since the Ramrod contains 'something borrowed,' I think it is only right to recognize those who made contributions. The ideas of both Lew Mahieu and Paul Gilliam had a profound influence on the design of Ramrod. Their help is sincerely appreciated.

Before moving on to the construction of Ramrod, I would like to say a few words about a theory regarding the age-old controversy of spiral stability. It is the direct application of this theory which makes Ramrod one of the most spirally stable free flight models yet designed.

Advocates of both sides of the question produce convincing arguments to back their theories, but both make assumptions in their theories - assumptions which may not be true in each case. As an example, one assumes that his model is slipping while in a steep turn, as well may be the case. But my model might skid under similar circumstances. Hence, what would act as a stabilizing force in one case might well be a destabilising force in the other! I firmly believe that we can safely throw most of our old spiral theories into the scrap balsa box and substitute what I shall call, for lack of a better phrase, the 'top rudder theory.' My contention is that to insure a design to be spirally stable we need do only two things:

1. Provide in the design sufficient decalage, dihedral and rudder so that we will have, respectively, ample longitudinal, lateral and directional stability;
2. Design or adjust our model so that it will climb against rudder. In this way the rudder offset will help hold the tail down in a steep bank.

It's as simple as that.

Ramrod is just about as simple to build as a free flight model can be, but a few step-by-step hints may help keep you out of trouble. The first step, of course, is to scale up the plans; for the 250, multiply all dimensions on the drawing by three for full size. If building one of the other Ramrods, use the table for all dimensions and wood sizes, If a construction detail seems unclear or incomplete, refer to the 250 drawing for clarification.

The Ramrod 250 wing is a little unusual, since it is not built with conventional ribs, as the larger ones are. This 'semi-rib' enables one to build as light a wing as possible and greatly reduces the time consumed in cutting out ribs. With an aluminum pattern, ribs can be chopped out in practically no time. The 'semi-rib' is not used in the larger Ramrods since more strength is needed and weight is not at such a premium at is it with the Half-A's.

Start your 250 wing by pinning down to the drawing the LE and, the notched TE. The 1/16 in sq bottom ribs are then added, followed by the two spars and the rib support, which is cemented to the LE. Make sure there is no cement fillet left, which could later hold up the front of the ribs and false ribs. Note that at the center of the wing and at all dihedral joints, full rib's are used, since extra support is required at these places..."

Quote: "Hi Steve, Here is Ron St. Jean's classic Ramrod 250 from MAN June 1956. This has been scaled up from the plan in the original article and has the light-weight built up rib whereas the later kit plan Ramrod 250 (oz6629) shows a conventional solid rib. The only change made to the magazine drawing is to point the rear spar dimension on the wing section in the right direction - the original shows both spar dimensions arrowed to the front spar. I have also scanned the construction article which includes wing ribs and a table of dimensions and wood sizes for three larger Ramrods: '432', '600' and '750'..." 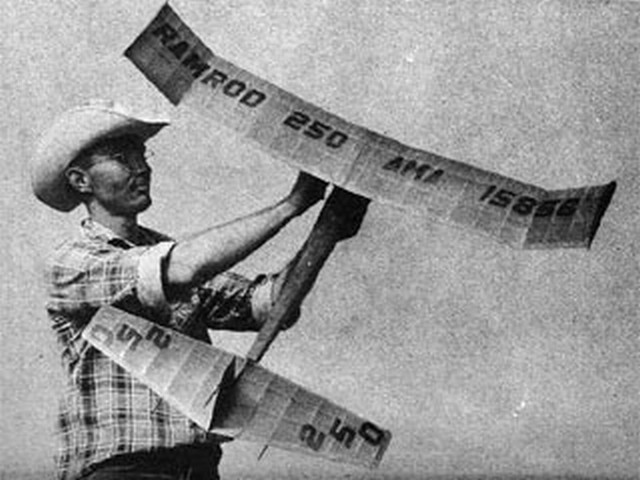 I recently built a Sig Ramrod 250 from and old kit, it seems to be the same as this plan but showing a Holland Hornet for the engine(!). I added RC and electric "250" power and 2s 800mah 7x4 prop, a bit less than cooking 049 glow power, probably 50watts. I intended to mount a Babe Bee 049 once trimmed out, but the controllable power of elec is a big plus.
The fin area is too small for manageable rc, so i added subfins to the tailplane which improved control; but rudder is still very sensitive at any power setting. If the wings get banked too much (50degrees ..easily done) it dives and loses hieght fast!, but elevator rescues the situation. The elevators are small, only 1/2 inch wide, but work fine and not too sensitive. So it is very much a guided free flight plane, and if left alone is quite stable. Very much a floater. CG is as per plan, very near the trailing edge, and despite a large battery i had to add a lot of nose weight to get that CG. If building this for elec i would have the nose slightly longer to put the prop where the 049 would be, and slightly wider fuz as there is not much room. Vertical take-off?.... not tried yet(!!!) but on my moderate power it climbs very quickly. Downthrust is as per plan, and does not need reducing (I considered doing that, but it flies fine with good power transition characteristics. Be careful that the tailplane (aka backup wing?) is not warped as that would mess up the trim.
Jim - 31/08/2021
Just to add to my comment above, it is a 500mah 2s battery not 800. Even so, it's a tight squeeze, but I needed nose weight anyway. My Sig kit plan looks the same as the Berkely kit plan (oz6344), and btw the kit wood was mostly just fine
Jim - 31/08/2021
Add a comment